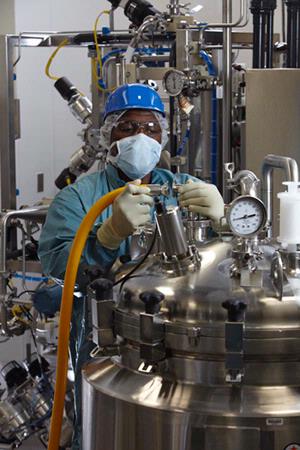 Talecris Biotherapeutics, which is headquartered in Research Triangle Park, is expanding its manufacturing operation in nearby Clayton, N.C.
photo courtesy of Talecris

orth Carolina-based Talecris Biotherapeutics, which nearly merged with Australian vaccine maker CSL last year, is moving forward with its huge manufacturing expansion near Clayton, N.C., just southeast of Raleigh. The company announced last November that it would invest $268.7 million and create 259 jobs over the next seven years. The $3.1 billion merger plan was scrapped last June due to antitrust issues raised by the FTC.

Talecris Biotherapeutics discovers, develops and produces critical-care treatments for people with life-threatening disorders in the areas of immunology, neurology, pulmonology and hemostasis. The company employs about 4,700 worldwide with headquarters in the biotech hub of Research Triangle Park, and regional headquarters in Toronto, Ontario, and Frankfurt, Germany. With more than 1,800 full-time workers currently employed in Johnston County, Talecris is one of the county's largest employers. The company added more than 200 jobs to its N.C. work force in 2009.

Talecris received an incentive package of tax breaks and other aid from the state and local government for the expansion. Construction began early this spring.

"We are currently continuing with preliminary/detail design," says Tim Hamm, senior director of the company's fractionation program. "Earth works for site preparation is under way."

Fractionation is the separation of blood into its component parts, with fractionation of the resulting plasma producing important proteins for therapeutic uses. The company also has fractionation and contract manufacturing capacity at a facility in Melville, N.Y.

Gov. Bev Perdue praised the work of officials from Clayton, the county and state who worked with company executives to convince them to expand here rather than build a new facility elsewhere. The company reportedly considered several sites in South Carolina. Perdue said Talecris decided to expand its presence in Clayton partly because of financial incentives. Talecris officials said the quality of the work force in Clayton and the town's close proximity to the area's major universities were also keys to their decision.

"We're extremely pleased to be investing in our company's growth while at the same time contributing to the economic prosperity of Johnston County, a region that has been a historic partner in the development of our industry," Mary Kuhn, executive vice president of operations, said at the expansion's announcement. "Our manufacturing capabilities have grown exponentially in recent years, creating more jobs and local opportunities. We're excited to continue expanding in a region that has been so supportive of the biotechnology industry."

Between its launch in 2005 through the end of 2007, Talecris invested more than $550 million to support the growth of the business.

"Our partnership with the State of North Carolina and Johnston County provides a solid foundation for the implementation of our capital expansion plans to drive the next leg of our future growth," said Lawrence D. Stern, Talecris' chairman and CEO, during the company's annual shareholders meeting earlier this month.

To help facilitate the expansion, the company has been awarded a $250,000 grant from the state's One North Carolina Fund. This fund assists the state in industry recruitment and expansion by providing financial assistance through local governments to attract business projects deemed by the governor to be vital to a healthy and growing state economy. In addition, the state Economic Investment Committee awarded a Job Development Investment Grant to Talecris. JDIGs are awarded only to new and expanding businesses and industrial projects whose benefits exceed the costs to the state and which would not be undertaken in North Carolina without the grant.

Under the terms of the JDIG, the company is eligible to receive a grant equal to 65 percent of the state personal income withholding taxes derived from the creation of new jobs for each of the 12 years in which the company meets annual performance targets. If Talecris meets the targets called for under the agreement and sustains them for 12 years, the JDIG could yield as much as $3.66 million in maximum benefits for the company.

In addition, up to $1.2 million could be added to the state's Industrial Development Fund for infrastructure improvements in economically distressed counties. When a JDIG is awarded in the state's more economically prosperous counties such as Johnston, 25 percent of the grant award is allocated to the Industrial Development Fund to encourage economic development in less prosperous counties.

The company will also get tax breaks for the next few years from Johnston County.