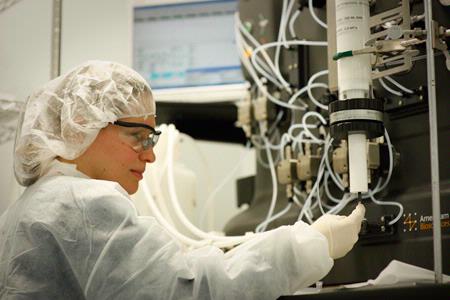 he head of Medicago, a Quebec City-based clinical-stage biotechnology company focused on developing vaccines derived from plants such as tobacco and alfalfa, says the company found just the right combination in North Carolina's Research Triangle Park for its new U.S. subisidary, Medicago USA. The company announced in early August that it would develop a 90,000-sq.-ft. (8,360-sq.-m.) facility in RTP.

"We had a rather large choice of states to look at and filtered it to three major choices," says Andy Sheldon, Medicago's president and CEO. "We compared states as to how they would best suit our business model and three factors led us to Research Triangle Park. One, this is a biotech hub with a lot of companies, with a large work force that is well educated and well trained. Two, we are also very interested by the close relationship between educational institutions and companies, who work close together with training programs. It's an absolutely important factor. North Carolina has a super structure in place. Third, the capacity of local organizations to assist in the process was very positive as well."

Medicago was awarded a $21-million grant from the Defense Advanced Research Projects Agency (DARPA), Broad Agency Announcement (BAA), Defense Sciences Research & Technology to demonstrate the scalable manufacturing of its plant-expressed vaccines in the U.S. under a Technology Investment Agreement. Medicago will scale-up and automate its process to demonstrate  its capacity to produce 10 million doses/month of influenza vaccines with the potential for further expansion in the future.

The strategic collaboration is a $42-million project in which DARPA contributes $21 million, Medicago $7.5 million and Alexandria Real Estate Equities $13.5 million.

Sheldon says Medicago also looked at other states to site its first facility outside of Quebec.

"Several other states had promising packages," he says. "At the end of the day, you've got to look at the long term of where you are and its situation, and the quality of life."

Medicago's North Carolina operation will employ up to 85 in its initial phases and Sheldon says that number could grow in the future with different contracts and development phases. Clients will primarily be the U.S. government and also governments around the globe.

Vaccine production will begin in North Carolina in the fall of 2011. Sheldon says the new hires will be typical life sciences positions ranging from production workers to quality assurance to engineering.

Medicago's new facility is a sales leaseback arrangement with Alexandria, which is building it to Medicago's specifications.

"They are one of the best known life sciences construction companies," Sheldon says of Alexandria. "They are very receptive and easy to work with."

Medicago, which was formed in 1999, employs 90 in Canada. Founded as primarily a research company, it turned to manufacturing in 2005 and has been a publicly-listed company since 2006.

By locating in North Carolina, Medicago can also access the state's vast expertise in tobacco, another consideration in its location decision.

"North Carolina has an acknowledged expertise in tobacco at its universities, which will be a great benefit," Sheldon says.

Medicago's new facility will essentially be a greenhouse, Sheldon says, with high security and an extraction and purification facility.

During the recent H1N1 influenza outbreak, Medicago's rapid plant-based vaccine technology was able to successfully develop a vaccine candidate in less than a month after identifying the H1N1 strain and is therefore one of the few technologies that can provide a solution in the case of a pandemic.

"It's vitally important to our Homeland Security that we have a robust domestic vaccine supply, and this facility will add to our production capacity helping mitigate future threats," said N.C. Congressman David Price, chairman of the House Homeland Security Appropriations Subcommittee. "Medicago's facility will ultimately bring hundreds of good paying jobs to the region, and DARPA's investment in this project is another significant contribution to local recovery efforts." 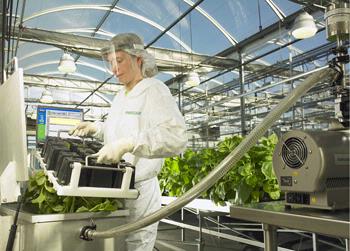 Medicago produces vaccines from plants in the tobacco family and alfalfa.
Photo courtesy of Medicago