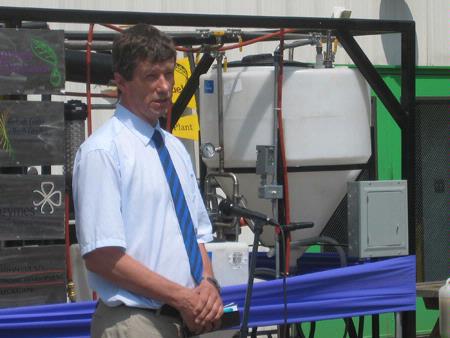 Per Munk Nielsen is senior science manager at Novozymes A/S, a Danish developer of industrial enzymes.

‘Enzymatic processing’ is key to sustainable biodiesel production, according to a Tar Heel trio of parties making inroads in emerging transportation systems.

The facility is the first of its kind in the nation. The event showcased the production equipment, which uses enzymes ionically bonded to beads to catalyze waste grease into high-quality biodiesel. The goal for the equipment is to produce biodiesel meeting ASTM (American Society for Testing and Materials) standards. Enzymatic biodiesel production is an emerging technology and differs from the more typical method using transesterification. Enzymatic processing can convert low-quality feedstocks such as fats and oils, brown grease, and DAF (dissolved air flotation) sludge into biodiesel with clean co-products. The enzymes in this process, which are supplied by Novozymes, also reduce the product stream clean-up compared to conventional biodiesel production.

Why Biodiesel Is More Sustainable

Novozymes' senior science manager, Per Munk Nielsen, explains the significance: "Bioethanol is different from biodiesel as the ethanol is made from carbohydrates and the biodiesel is based on fats/oils. As Novozymes is already involved in technology for bioethanol, it is very natural to see what we can do for the production of biodiesel." The biodiesel production converts fats/oils to esters using water-soluble enzymes, or lipases. The enzymatic process can substitute the chemical catalyzed process which is used today. "By changing to enzymes instead of chemicals, the production will take place at lower temperatures with production of fewer by-products and the use of less water and chemicals," Nielsen says. "This is why it will become more environmentally sustainable, which is one important element of the Novozymes vision."

One more step is required, says Nielsen. "The enzyme itself has to be sold at a lower price than the lipases are sold today. To do that, we must do a big effort in development of a more efficient and lower-cost enzyme. And that is what we have decided to do based on our unique position in the market for lipases going into detergent and other oil processes in fats and oils processing. We have found that the enzymes provide an opportunity to use bioethanol in the process instead of non-renewable methanol, which the chemical process cannot do. In that way, the biodiesel will be based on fully renewable raw materials and produce a 5 to 6 percent higher yield of biodiesel."

Biofuels Center President and CEO Steven Burke said at the plant announcement, "We are proud to be a part of this project, and there will be more outcomes from this enzymatic process. This event illustrates how North Carolina, by smart policy, is committed to growing the biofuels sector." He continued, "With place-changing technologies like enzymatic biodiesel, our dependence on fossil fuels is eroding."

Added Dianne Reid, president of the Chatham County Economic Development Corporation, "Chatham County is pleased to be part of this project to reduce our dependence on oil, and what we also like about it is that it's at a scale that can be replicated across the state."

Piedmont Biofuels chief of engineering, Lief Forer, made this observation: "Research into enzymatic biodiesel production has been done for years by academic researchers at small scale. But what makes this project different is we're developing a process that can be commercialized. The equipment [on display] is a significant step toward commercialization."

And it is a significant part of Novozymes' plans for continued R&D in this arena, says Nielsen. "The plan is to use the pilot unit to provide the data required for documentation of the process, that is, [to make sure] the enzymatic process is cost effective compared to the chemical, that the enzymes can be reused a number of times on different qualities of oil and the biodiesel coming from the enzymatic process is fulfilling the specifications for biodiesel. It is planned to build a small-scale production unit at Piedmont once we have finalized the tests using the pilot unit. We are already using the Piedmont experience in our contacts with the biodiesel industry, and we can bring potential clients to the Piedmont facility to show them a process which is working."

An estimated eight million gallons of brown grease are available in North Carolina alone with another 400,000 gallons of DAF sludge per chicken plant, which is typically composted or landfilled. Enzymatic biodiesel processing results in a cleaner glycerin co-product, reduces or eliminates the use of water and the associated disposal problem, and occurs at a lower temperature compared to competing catalysts. The clean glycerin derived from this process can be used to make a wide variety of products, including solvents and bioplastics. Research from this project will help establish how to make enzymatic biodiesel cost-competitive. 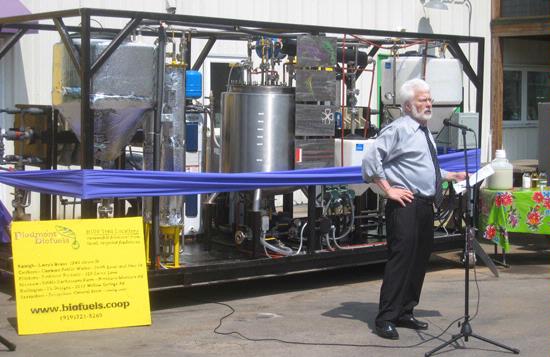 A mobile pilot plant for biodiesel production was unveiled at the Piedmont Biofuels campus in Pittsboro, N.C., on July 16th.