Rethinking the Role Of the Research Park 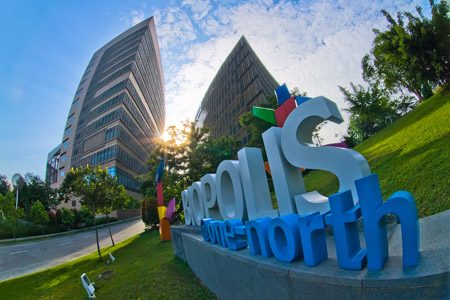 An Abbott Laboratories unit executive sees a cross-border, more collaborative role for its next generation of R&D sites. Applying regional insights globally is the goal.

bbott Laboratories added to its Singapore and Southeast Asia property portfolio on May 5 with the opening of its Abbott Asia-Pacific Nutrition Research & Development Center at Singapore's Biopolis Research Park. The center is Abbott's largest nutrition R&D facility outside of the U.S. and Singapore's first nutrition R&D site creating science-based nutritional products for infants, children and adults. Abbott scientists at the center will develop products with new ingredients, flavors and packaging to address critical nutritional challenges, dietary needs and taste preferences of consumers throughout the Asia-Pacific region.

The Biopolis Research Park site is Abbott's fifth expansion in the region in less than 18 months and its third Singapore facility. But the site was not a shoo-in. "We looked throughout the region – at China, Australia and India. The decision was about infrastructure and the quality of the research park and knowing that my staff there would have access to mixed-use space and a mixture of small and large companies," noted Robert H. Miller, Ph.D., divisional vice president, global research and development and scientific affairs, at Abbott Nutrition. Miller spoke on the topic "Fostering Innovation in a Research Park Setting" at the Association of University Research Parks' BioParks 2010 conference in Chicago on May 1. Economic incentives played a role, too, says Miller, and "Singapore really understood that." Abbott Nutrition has a history of working with the Singapore government, having built a US$300-million plant there, the Abbott division's largest in the world.

The global health care company also operates a pharmaceutical R&D lab in Shanghai, China, and a nutrition manufacturing center in Guangzhou, both of which opened in March 2009. Abbott employs more than 12,000 people in the Asia-Pacific region. The Abbott Asia-Pacific Nutrition R&D Center will house approximately 65 scientists in Singapore. Up to 90 percent of the hires at the center will come from Singapore and the broader region. Abbott Nutrition also recently opened an R&D center at the Research Park at the University of Illinois at Urbana-Champaign (UIUC) in Champaign, Ill., which is home to more than 70 companies, from technology startups to Fortune 500 players.

These new centers represent a shift in how Abbott Nutrition sites R&D centers, according to Miller. "Our old model was about being an international company, with sites all across the globe, both manufacturing and R&D. But we weren't thinking about it in a global perspective. So in the old model, everywhere we had a manufacturing plant we had an R&D center, and they coincided in our own facilities," as in Columbus, Ohio, and Granada, Spain.

"The new model, which was instigated in the last couple of years by our CEO, Miles White, is about how to think about this differently. It's about research parks and their knowledge spillover. When we started looking at how research parks could accelerate our innovation, it matched very well with our long-range plans at Abbott, one of which is taking regional insights and creating global impacts." By knowledge spillover, Miller means the capacity to incorporate an entrepreneurial spirit into the science of R&D. "I call it 'intrapreneurial,'" says Miller. "I want people in my organization to understand what being entrepreneurial means, but I want it 'intra' to the organization and to keep stimulating that."

Specifically, Abbott Nutrition defines the new model as strategically planned, mixed-use campus expansions with space for academic, government and industrial use. Besides being an innovative environment, this space should include room for future research growth, planned multi-tenant facilities, housing and other amenities and flexible development options.

In 2007, 3 percent of Abbott Nutrition's R&D budget was outside the company's primary operations in Chicago and Columbus, Ohio, where Miller is based. By 2014, he says, 30 percent of the R&D budget will be associated with research park operations. "We're seeing the dynamic of our organization [evolve], and we need to think about that differently." Other drivers of Abbott Nutrition's R&D location strategy are the need to access talent where it exists in the world and the need to conduct research in environments conducive to what Miller calls 'open innovation'. The Singapore and University of Illinois R&D centers deliver, he contends.

"In January 2009, we did not have any one [R&D-dedicated] center outside the United States, and the University of Illinois opening was only in October," notes Miller. So when it came time to implement the global R&D site strategy involving research parks, Abbott Nutrition did so expeditiously. The Singapore site will employ about 75 within the next year and will complement the Singapore manufacturing operation. In Illinois, Abbott Nutrition has collaborated with the University of Illinois for about two decades already, and part of the university's mission involves its research park, so that location is a particularly good fit, says Miller. "The goal here," says Miller, "is to have UIUC and Singapore begin to show us the way to do this new innovation." As of early May, Abbott employed 11 at the UIUC Research Park, including seven researchers, in about 4,000 sq. ft. (372 sq. m.) of space. Miller says an Abbott R&D operation in Worcester, Mass., has already expressed interest in emulating some of the UIUC operation.

At Singapore's Biopolis Research Park, Abbott Nutrition is sharing lab space with Abbott's Global Pharmaceutical R&D operation. This arrangement creates some capital allocation issues, but more importantly, it creates opportunities to share "Abbott science" across organizational divisions, says Miller. On a larger scale, Abbott Nutrition is beginning to collaborate with such academic institutions as the National University of Singapore, the Liggins Institute at the University of Auckland, New Zealand; and Singapore's Agency for Science, Technology and Research (A-STAR) on the effect of environment and nutrition on epigenetics – the study of inherited changes in genes. Similar work is under way by researchers at the University of Granada (near another Abbott R&D center) and the University of Southampton which could well tie in to the Asia-Pacific research efforts. Suppliers and startups familiar with this work will likely play a role, too, in due course. Abbott's Biopolis footprint is about 30,000 sq. ft. (2,787 sq. m.) with room to expand in the future. Miller says he is highly confident that similar cross-border R&D initiatives will take root at the UIUC center.

The epigenetics research experience illustrates the opportunities available to those open to multi-divisional and multi-college research. Limiting an organization's R&D prospects to work one part of the organization's research function can execute at one higher-ed outlet may result in limited benefits, Miller suggests.

"My view of research for large companies, speaking for Abbott Nutrition, is how do we be in the mix as opposed to being isolated and picking up the phone to collaborate? When you're in the mix — that's when you can start taking these regional insights and drive them globally." Today's generation of research parks are about much more than land linked to a university. They make possible real innovation and invention, and increasingly they can do so internationally, not just locally, if the park and the R&D operation require it.