The University of Melbourne’s Blue
Gene supercomputer is putting
research into vision tests on
the fast track. 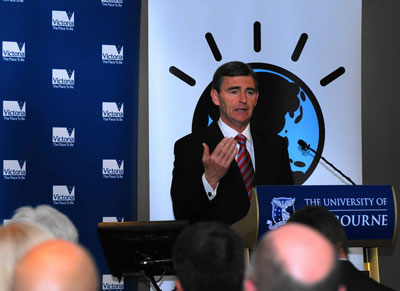 undreds of thousands of Australians suffering from glaucoma will have access to more accurate information about their deteriorating sight thanks to the arrival of Victoria's supercomputer at the University of Melbourne.

Victoria's Premier, John Brumby, said the new computer, which is part of the A$100-million Victorian Life Sciences Computation Initiative (VLSCI), would help drive new breakthroughs in the understanding of human disease such as glaucoma and translate that knowledge into better medical care. The VLSCI was first covered in the June 2010 edition of the Site Selection Life Sciences Report, following meetings with Melbourne-area life sciences experts at the BIO conference in May.

"This is the most powerful supercomputer project dedicated to life sciences research in the southern hemisphere, and is set to help the medical community fight diseases and improve the quality of life for thousands of people," Mr. Brumby said on August 10th. "Along with the hub of the National Broadband Network, to be built here in Melbourne, this is part of the reason why we are regarded as the ICT capital of Australia."

The IBM Blue Gene supercomputer will be used by researchers at the University of Melbourne-led Victorian Life Sciences Computation Initiative (VLSCI). Associate Professor Andrew Turpin from the Department of Computer Science and Software Engineering at the University of Melbourne will be among the first researchers to use the Blue Gene supercomputer and says its large scale processing capacity will advance his research into improving vision testing.

"One of the main tools in our development of faster, more accurate eye tests is computer simulation of tests that assess the whole field of vision," says Prof. Turpin. "Currently these take days on a standard computer, but with Blue Gene we can do them in minutes, allowing even more complex approaches to be evaluated. Current clinical tests of the visual field are highly variable, and it can take several years to reliably determine if vision is deteriorating due to glaucoma. Our novel combination of data from both images of the optic nerve, and our new visual field testing strategies, will hopefully markedly reduce this time."

Dr. Allison McKendrick from the Department of Optometry and Vision Sciences at the University of Melbourne says the benefits of this knowledge and better vision testing will have a great impact on the hundreds of thousands of Australians with, or at risk of, glaucoma.

"Glaucoma is the second leading cause of irreversible vision loss in older Australians," she explains. "Improving the accuracy of detection and monitoring of vision loss greatly enhances a clinician's ability to treat this disease."

The supercomputer has been provided by IBM as part of its partnership with the $100 million VLSCI hosted by the University and established in 2008 to strengthen the research capabilities and outcomes of Victorian life sciences research. 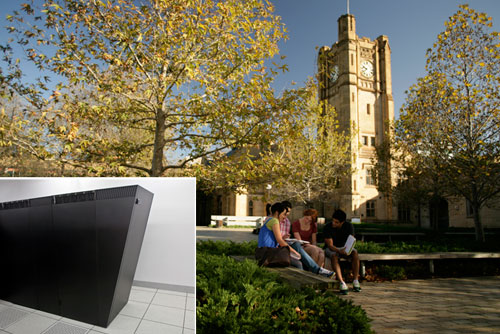