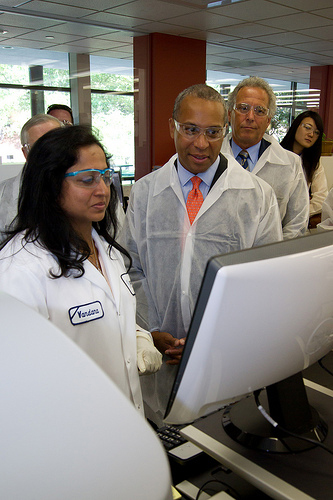 aris-based pharmaceutical company Ipsen is moving forward with two major expansion plans with Biomeasure, its U.S.-based subsidiary. Ipsen is expanding in Milford, Mass., and is relocating its U.S. headquarters from Brisbane, Calif., to Bridgewater, N.J.

The company's existing 77,000-sq.-ft. (7,153-sq.-m.) Milford facility serves as a center for Ipsen's U.S.-based peptide and toxin R&D platforms, as well as a manufacturing facility focused on production of recombinant proteins for the treatment of hemophilia. The expansion and renovation project, currently in the design phases, includes a new three-story, 62,000-sq.-ft. (5,759-sq.-m.) building, to be constructed while completely renovating one of the site's two existing buildings. Ipsen plans a groundbreaking for mid-2012, with the new building targeted for completion in early 2014. The new facility will house R&D and Process Sciences laboratories that support Ipsen's strategic objectives.

"Ipsen's Milford-based facility is at the cutting edge of innovative, impactful and high-performing research, development and manufacturing capabilities focused on delivering new treatments for serious and life-threatening diseases to patients," said Biomeasure's president. Cynthia Sylvestre. "We are confident that investing $45 million in this unique site, in such close proximity to the imive concentration of scientific skills and talent in Massachusetts, will enable Ipsen to expand its bio-therapeutic technological platforms and pipeline."

The Milford site has a current staff of 150, which includes chemists, biologists and translational science experts and also a full technical operations team specializing in the manufacture of recombinant products targeting hemophilia.

"Massachusetts is a global leader in the life sciences and a great place to do business, thanks to our investments in the innovation economy," said Massachusetts Gov. Deval Patrick, who met with the company's leadership at this year's BIO International Convention to discuss the project. "We are proud to support Ipsen Biomeasure's R&D efforts through the Massachusetts Life Sciences Center and I am pleased to see the Company growing and creating jobs right here in Massachusetts."

The latest bioSTATus report from Richards Barry Joyce & Partners, released Nov. 30, said the number of Phase I clinical trials attributable to Massachusetts-based research initiatives has more than doubled since 2005, from 25 to 56.

Ipsen is also moving its U.S. headquarters cross-country to a 30,000-sq.-ft. (2,787-sq.-m.) facility in Bridgewater, N.J. Ipsen said relocating, under a six-and-a-half-year lease, reflects its commitment to strengthening its U.S and global presence and providing specialty-care expertise to underserved neurological and endocrine disease communities.

"New Jersey is the leading biopharmaceutical center in the U.S., and Ipsen is ready and eager to be a part of that community of innovators," said Sean McKercher, president and general manager, Ipsen North America. "This move was a natural choice for Ipsen, given New Jersey's ready access to international travel hubs, deep pool of pharma talent and business incentives for the biopharma sector — and it reflects our commitment to champion medicines for patients with severely debilitating diseases in need of therapeutic options."

Ipsen, which expects to begin operations in Bridgewater by April, plans to hire more than 100 people.