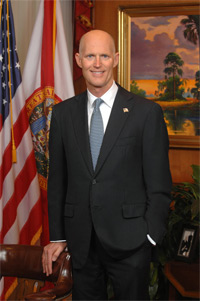 The Site Selection Life Sciences Report had the opportunity to sit down with Gov. Scott and Gov. Fallin during the convention to discuss how their states are advancing the life sciences sector.

Scott says he came to BIO to help drive home the point that his state is more than "Disney World and orange juice." He notes that there are about 850 biotech firms, and the state is working to build on recent momentum stemming from major research centers locating in the state. These include Scripps Florida, Max Planck Florida Institute, Sanford-Burnham Medical Research Institute, Torrey Pines Institute for Molecular Studies, VGTI Florida and Hussman Institute for Human Genomics.

"Florida has the third most tech companies in the country," Scott says. "Our job is to make the state a place where companies can do well in biotech."

Scott says since he took office in January he has worked to make the state more attractive to life sciences companies by reducing regulations. He hopes to reduce Florida's corporate income tax, which is currently 5.5 percent. Scott notes that clusters have developed on Florida's east and west coasts as well as in the Orlando area. He suggests the state capital may be the next tech cluster.

"Tallahassee is the next Austin," Scott says. "It's a great college town. Tallahassee will do the same thing."

Scott cites Bing Energy's plan to create about 250 jobs as it moves its world headquarters to Tallahassee to develop better fuel cells through the use of nanotechnology developed at Florida State University.

Scott says the case could also be made for Naples as a burgeoning technology center. He cites the recent announcement by Arthrex for a major expansion which the company says will add 600 employees over the next five years. Arthrex, which currently employs about 1,000, develops products for arthroscopic surgery and provides training facilities for healthcare providers.

Scott also hosted a breakfast briefing at BIO which features a lineup of some of the state's major recent life sciences success stories. Attendees included nearly 50 representatives of biotech companies being courted to invest in Florida.

One of those success stories involves the Lake Nona Medical City, a 1,000-acre (405-hectare) greenfield life sciences cluster being developed just southeast of the Orlando International Airport on a site that was once promoted as a potential location for Scripps Florida, a sprawling research campus that opened in Jupiter in 2009. Lake Nona Medical city will be a $2-billion medical campus that will include the University of Central Florida's College of Medicine, the Sanford-Burnham Medical Research Institute and the M.D. Anderson Cancer Center Orlando.

"We have the chance of a lifetime to build a cluster from the ground up," says Thad Seymour, vice president, life sciences for Lake Nona Medical City. "We have the opportunity to do things differently. We have 400 people working there now and by the end of next year there will be 4,000."

Gov. Fallin took an active role at BIO, spending considerable time at the state's exhibition and attending a reception hosted by OKBio. She says she is the first Oklahoma governor to attend the BIO convention in eight years. She says she used the opportunity to meet with companies to talk about the advantages of locating in the state.

"It's a great opportunity to meet with the world's leaders in bioscience," Fallin says. "It's important for companies in and outside of Oklahoma to know that the governor supports the industry. I met with companies who have invested in the state to thank them and ask them what else we can do to help them.

Fallin says the state took several steps this year to improve its business environment, including passing comprehensive tort reform and worker's compensation reform. Another step is the creation of what she calls her "game-changer committee," a 44-member group of business leaders tasked with finding ways to improve the state's business climate.

"A lot of Oklahoma jobs are related to bioscience," Fallin says. "Oklahoma has around 500 companies that contribute nearly $7 billion to our economy. Companies like our low cost of doing business and our skilled work force. We have great technology schools like the University of Oklahoma and Oklahoma State University, and that is attractive to investors."

"We have venture capital in Oklahoma, but we need more," Fallin says. 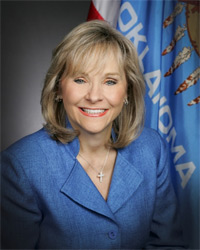