A ‘lighthouse’ project from Bayer CropScience
shows the way for a company and a region. 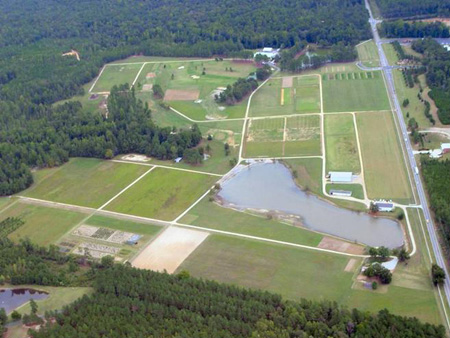 an a homely 50-year-old concrete block building be just as environmentally friendly as the light, airy constructions that dominate the world's photo album of sustainable buildings?

And can the carbon sequestered by the acres of turf and trees that surround that building aid the site's sustainability score, thus offering promise for scores of corporate campuses around the world?

Bayer CropScience aims to answer those questions and more at its 281-acre (114-hectare) research and testing complex in Clayton N.C., just outside the Raleigh-Durham metro area.

"There are a minimum of 40 million acres [16.2 million hectares] of managed turf in North America," says Nick Hamon, vice president of sustainability for Bayer CropScience North America. "It's one of the biggest 'crops' in North America, and a huge sink for carbon."

Working with products and insights from sister company Bayer MaterialScience as well as researchers and students from North Carolina State University, a team led by Hamon is pursuing a "lighthouse" project intended to demonstrate energy efficiency improvements and that carbon offset value of trees and managed turf. Bayer has been working with researchers at N.C. State for about four years. As that work has progressed, says Hamon, "we started to realize that turf is an important carbon sequester, instead of saying 'It just uses water, get rid of it.' "

"In 2010 there were obviously the tax credits for photovoltaic — 30 percent federal and 35 percent state — so you ultimately pay about only 30 percent of the costs," says Hamon. "The ROI looks very, very good for five to seven years, for the cost of installation."

Until last September, Hamon was VP of product development and sustainable development for Bayer Environmental Science (BES), a division of Bayer CropScience. Hamon has more than 25 years experience in the agricultural chemical and environmental science industry, with broad exposure to all parts of the business managing teams, projects, processes and facilities, as well as operating in both the technical and business arenas. Now, prompted in part by questions from his children, his job description has migrated 100 percent to sustainability, which he says "is one of the few things I've ever come across in my career where people who wouldn't normally talk to each other can exchange ideas and best practices."

The property on which his team has focused is half woodland and half research blocks, he says. The site has evolved from tobacco fields to a multifaceted campus mostly devoted to the company's turf and ornamental businesses, with 47 turf cultivars and a four-hole experimental golf course with USGA spec greens. The Environmental Science business has tested products there for decades for uses ranging from golf course maintenance to pest and malaria control. Hamon says BES is a $1-billion business with approximately 800 employees around the world.

Actions thus far have included complete replacement of windows and doors and installation of photovoltaics on the roof. The site continues to be a testing ground, only now for sustainable building components as well as sustainable agrichemical products. Graham Architectural Products, a member of Bayer MaterialScience LLC's EcoCommercial Building (ECB) Network, has launched GThurm – a line of high-efficiency windows that, among other traits, uses pultruded polyurethane composites for the lineals. The first commercial installation of the windows took place in late 2010 at the Clayton site, where 76 windows were replaced.

"I could actually feel a breeze on a windy day when I stood next to the old windows," said John Rock, who was the site manager at Clayton during the time of the installation, in a release from Graham. "The new windows have greatly increased the comfort of the people who work in this facility. Furthermore, we expect to realize energy savings of roughly 12 percent, which is significant.

Outside the cinderblocks, with the help of N.C. State, BES undertook a complete survey of the property's biodiversity— an aspect of particular interest to Hamon, whose Ph.D is in insect ecology. After more than 50 years of testing agrochemicals on the parcel, says Hamon, the company needed to know what kind of damages there might be on site.

A project was initiated with N.C. State's College of Agriculture and Life Science faculty and students to survey the site for plant, insect and macroinvertibrate populations, and to assess the nutrient and bacterial quality of the water in the site's four ponds.

Insect collecting yielded more than 1,000 morphospecies, including 26 species of ants. "We are really impressed with the diversity of material so far," said Andy Deans, N.C. State assistant professor of entomology, in a BES report. "We actually found an incredibly rare wasp in the family Mymarommatidae — the first record of this family in North Carolina. We've found numerous other rare insects, as well. It's been pleasantly surprising to say the least."

"It actually came out very positive," Hamon says of the survey. "This place is a little haven in a rapidly urbanizing area."

As with the turf and trees, such an independent examination of biodiversity could be another area worthy of exploration by corporate owners of large campus parcels. For instance, a regional corporate leader in sustainability in the Research Triangle, SAS, has not yet factored in the lawn, says Hamon, who has visited with SAS team members.

"They are looking at their carbon balance across their sites," he says. "But they hadn't thought about the acres and acres of green space around their buildings."

Hamon says companies and individuals can make use of a carbon calculator created by N.C. State that takes into account yards, trees, turf, and such actions as how often you cut or fertilize, and calculates the offset value of your garden against your car.

Hamon praises the agriculture and engineering schools at N.C. State, which he says is home to "the top turf school in the country." Bayer recently endowed a chair of sustainability at the school, with a focus on turf and on the value of trees in urban locations. Hamon says there has been little pushback on campus, noting a frequently forgotten fact:

"Modern agriculture is responsible for feeding people," he says, noting another Bayer partnership with Carnegie Mellon University as it upgrades its sustainability profile in Pittsburgh. "These schools are pragmatic, and they understand technology is an enabler of sustainability," for instance in discovering new energy sources or methods of conserving energy.

N.C. State in December received its largest endowment ever, $40 million, from Lonnie and Carol Johnson Poole. Lonnie Poole is the founder of Raleigh-based Waste Industries USA. $37 million of the total is going to the newly renamed Lonnie C. Poole Jr. College of Management, where sustainability is a growing focus. Hamon, in fact, is teaching a course in the subject.

"NC State has long been known for its work in sustainability," said Ira R. Weiss, dean of the Poole College of Management, in December. "As a business college, we understand that sustainability is a critical business imperative. It impacts our society, our economy and, most importantly, the environment. It also impacts the corporate bottom line.

"We need to educate future leaders to view sustainability — and environmental impact — as complementary to innovation and entrepreneurship, and to show that it is not only socially responsible but that it makes good business sense, and must become a core value," said Weiss. "Technology will play a huge role in sustainability innovation, and we here at N.C. State and in Research Triangle Park [RTP] are in a great place to adopt sustainability and environmental impact as an ethical component of building future businesses."

Such goals are in keeping with the state's economic development vision as well, which increasingly is focused on cultivating and attracting sustainability-minded companies.

Bayer CropScience in March announced a $20-million greenhouse project at RTP, where it maintains its North American headquarters. The greenhouse will be designed to conduct GM and non-GM trait research, and also will support discovery research for molecular breeding and the development of data packages for trait deregulation.

"We continue to expand our activities in seeds traits. With the BioScience Innovation Center in Morrisville and the construction of the new greenhouse, the RTP area is rapidly becoming a major research hub for our company," said Sandra E. Peterson, chairman of the board of management of Bayer CropScience.

Meanwhile, using lessons learned at the Clayton site and from such fellow corporate neighbors as SAS, Bayer CropScience is evaluating whether PV might look good on the roof of its RTP headquarters.

Filling In the Numbers

Over in Clayton, the measurement continues, as improvements are held up against a baseline of site carbon emissions. Even while the team awaits a full year of PV on the roof, though, initial assessments indicate the overall site is at least carbon-neutral, and possibly on its way to carbon negative (more carbon sequestered than emitted).

In terms of energy consumption, the BES team is estimating it will use 163,248 kilowatt-hours (kWh) of electricity in 2011, compared to 486,531 kWh in 2008. That amounts to a whopping 66-percent reduction in electricity use. The team hopes to garner more than 30,400 kWh per year from the PV system.

The Clayton project isn't the only lighthouse shining out from the shores of Bayer's overall corporation. A carbon-neutral office eco-building was just inaugurated at the company's Noida campus in India, other projects are active at sites in Germany, a new LEED-certified building has just been completed in San Francisco, and several buildings in the BMS-North America home campus in Pittsburgh have raised their game to LEED standards. Bayer is one of the few German companies that have been listed in the Dow Jones Sustainability World Index continuously since its establishment in 1999, and in September 2010 the company was again included in the Carbon Disclosure Leadership Index (CDLI) as the best company in its sector.

Hamon says he visits Pittsburgh once every couple months for a sustainability council meeting that bridges Bayer's different businesses. He says it can be difficult to coordinate the hundreds of initiatives now occurring across the Bayer organization, but sharing best practices is "going very well now."

Phase two in Clayton will include geothermal: "There is a 20-foot-deep pond right next to the building, which allows us to be very efficient with a geothermal heat pump," Hamon says.

But already the site has come a long way from 10 years ago, when there was no recycling program, independent thermostats were not installed in different parts of the building, and the original un-insulated roof was still there.

Hamon too has evolved, both in comfort with his newfound métier and excitement over the prospects for discovery in a subject area a long way removed from insects, but which incorporates those insects into the big picture.

After years of research in sustainability, he says, "I don't know anybody who knows what to do well. I was very worried when I took this on because I am not an expert. But I've become less worried, because I don't think there are too many experts. We're all trying to find our way."

In addition to the ongoing environmental improvements at its research and testing site in nearby Clayton, Bayer CropScience in early March announced the construction of a new $20-million greenhouse at its North American headquarters located in Research Triangle Park.
Photo courtesy of Bayer CropScience