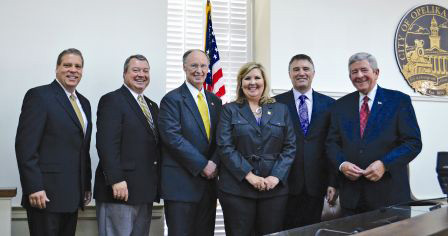 A town near the eastern Alabama state line attracts a dietary supplement manufacturer.

Pharmavite’s products include Nature Made vitamins.

orthridge, Calif.-based Pharmavite, maker of Nature Made vitamins and Soyjoy bars, produces more than 120 different kinds of supplements and fills more than 120 million bottles with 15 billion tablets, capsules, and softgels per year. The company will boost its U.S.-based manufacturing capability in 2013 when it opens a new 330,000-sq.-ft. (30,657-sq.-m.) facility in the eastern Alabama town of Opelika.

Pharmavite, which plans to employ 280, says the new facility is part of its strategy to capitalize on the growing global consumer trends on health and wellness and meet increased demand for its products. The new facility will occupy a 50-acre (20-hectare) site within the Northeast Opelika Industrial Park, located along Interstate 85 at Exit 66. Pharmavite is a subsidiary of Japan-based Otsuka Pharmaceutical Co.

"This is an important step in the growth of Pharmavite and we are very excited to soon become part of the Opelika and greater Alabama community," said Mark Walsh, Pharmavite's COO. "Our new Opelika facility will allow us to have manufacturing capacity near the East Coast markets, which make up a significant portion of our business."

Pharmavite, founded more than 40 years ago, and its business partner will be initially investing approximately $74 million in capital during the first year and, based on future growth, expect to add to the investment over the coming years. The decision follows a comprehensive site selection process that included evaluating several locations in the Eastern U.S.

"The site selection process was very thorough and we evaluated several high-quality locations, but ultimately it was clear that Opelika, Alabama, was the best fit based on the criteria we established for this location," said Ron Pillsbury, vice president, operations at Pharmavite. "From the high quality work force to the strong community infrastructure, Opelika met or exceeded our expectations, and we're excited to be joining such a great community."

"We are excited and proud that we will have a global leader in the dietary supplement industry locate in Alabama and employ 280 citizens," said Bentley. "Two hundred and eighty jobs is a major announcement for any town, and these are the type of high quality jobs that we have targeted for Alabama. This is a company with high standards that puts much effort into making sure its products are thoroughly researched and based on the latest science."

"Our state has the institutional and research structure in place to be a growing force in the life sciences field, and this is a goal we plan to keep moving toward," said Greg Canfield, director of the Alabama Development Office.

Pharmavite plans to break ground on the facility later this year and says future growth may send employment beyond the 280 people it plans to hire during the first year of operation.

"Our goal is to create the model manufacturing facility for the entire vitamin and supplement industry that will produce the highest quality products," said Lance Buchanan, director, plant operations at Pharmavite. "It will feature state-of-the-art technology and will be the first major vitamin and supplement manufacturing facility in the United States to be LEED certified."

Pharmavite officials say sustainability is part of the company's mission, and pursuing LEED certification aligns with its commitment to creating and producing products for better health worldwide.

The project aligns with an increasingly healthy life sciences profile in the Auburn-Opelika metro area, better known for its automotive industry cluster. In 2008, Gambro, a manufacturer of equipment used in kidney dialysis, opened a $180-million facility in Opelika The company employs about 170. Drug utilization review and pharmacy support services firm Health Information Designs is headquartered in Auburn. And New York-based Capitol Plastic Products, a maker of specialty vials for the dairy product testing and clinical lab markets, has steadily increased its footprint in Auburn since opening its first facility there in 1994.