Images courtesy of Stanton Springs
by JOHN W. McCURRY
I 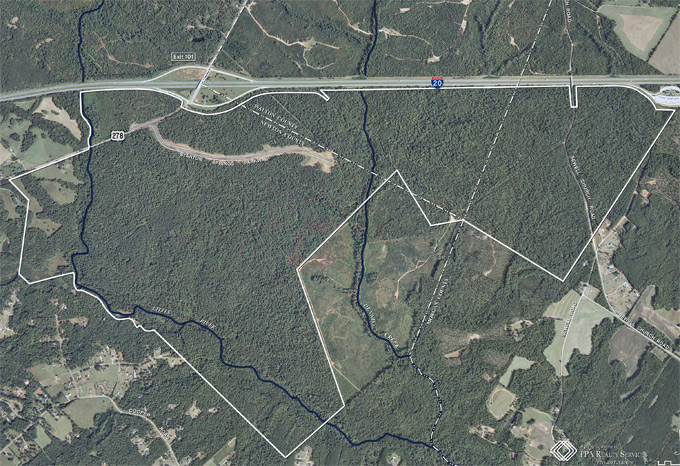 t was a time for bell ringing in Newton County, Ga. The promise of 1,500 new jobs meant that, in keeping with a tradition, a ceremonial bell would be rung 1,500 times. Baxter International is coming to town with its $1 billion-plus investment for a biologics manufacturing facility, and local officials and residents wanted to celebrate.

"The Newton County Chamber of Commerce has a tradition that every time they attract a new business, they ring a bell," says Alan Verner, chairman of the Joint Development Authority of Jasper, Morgan, Newton and Walton Counties, an organization which created Stanton Springs industrial park, Baxter's future home in Georgia.

Never had the Chamber's bell been rung 1,500 times in succession. It proved too much for the bell, as its clapper came off about halfway through the ceremony held on April 20, a day after the state's announcement of landing the massive project. But the crowd improvised and the ringing continued. After all, it's not every day that 1,500 jobs are announced.

Baxter will be the first resident of Stanton Springs, whose genesis can be trace to 1998 when the four counties formed the JDA for the purpose of developing a major employment center along I-20 east of Atlanta. Two years later the JDA entered into an agreement with TPA Realty Services to develop an industrial park similar to one TPA developed in the Johns Creek suburb of Atlanta. The partners subsequently assembled a 1,620-acre (655-hectare) park.

Stanton Springs had come close in the past to landing a big biopharma prize, finishing as the runner-up to North Carolina's Research Triangle Park the last several years for major projects by Novartis and Merck. This time it was RTP that was the runner-up, state and local officials say. Baxter is not being specific about its search.

"We conducted a comprehensive site selection process, starting with a list of global metropolitan areas, then narrowed the list to specific regions which ultimately resulted in the selection of Georgia," says Baxter spokeswoman Deborah Spak. "We are not providing specific information on other sites we considered, but I can tell you that we considered a number of major metro areas throughout the United States."

Baxter's new Georgia facility will manufacture plasma-based therapies that treat chronic and life-threatening illnesses. These therapies include treatments for immune disorders, trauma and other critical conditions.

Verner says the JDA's goal from the start was to attract a large biopharma company as the anchor for a biopharma park.

"We've entertained several major biopharma companies over the last six or seven years, and we came up short as a runner-up on several of those," Verner says. "We knew we had what they were interested in, but we were lacking in certain areas. Now, after several years of yard work, Governor [Nathan] Deal and Chris Cummiskey [Georgia Department of Economic Development Commissioner] and their staffs have worked with the JDA to put in place a real solid foundation for companies such as Baxter to locate here."

Verner says Merck and Novartis were among companies nearly locating in Stanton Springs, only to decide on RTP.

"We are not going to settle for runner-up any more. We have all the tools in place to be the next major home for the life sciences industry. The state is putting a training facility adjacent to their campus which will provide a constant, well-trained work force for Baxter and other companies. It will be a substantial facility with a large portion dedicated just to Baxter and their training component."

"The initial phase of development will utilize approximately 54 acres [22 hectares] of the site and will be able to accommodate additional capacity expansion within this footprint," Spak says. "A portion of the buildable area will be reserved for future opportunities, with the remainder of the site consisting primarily of undevelopable land."

Verner says Stanton Springs has been on the state's economic development map for years. He cites its proximity to the Centers for Disease Control in Atlanta, Atlanta's Hartsfield-Jackson International Airport and the University of Georgia.

"We are in a different watershed from Atlanta and have abundant water and a very good power system," Verner says. "There's a very large pool of potential employees within an easy commute."

The process that led Baxter to Georgia and Stanton Springs was a four-year journey. Rick Bradshaw, president of TPA Realty Services, describes the process as a classic competitive site selection pursuit where all the information was very guarded.

"Deloitte was the site consultant," Bradshaw says. "We got a blind contact. Our site was qualified on the basic information the state and Georgia Power had on megasites in Georgia. We knew from the start they that were looking at other states and other sites in Georgia as well. We are used to these pursuits."

At first the contacts came about twice a month. The company's identity remained a mystery.

"We went through the evolution of two or three initial visits and a series of follow-up questions," Bradshaw says. "We were told that Stanton Springs became the site of preference in Georgia, and we were told there as an alternative site in North Carolina."

Then the project was put on hold.

"As this one went further, it became more intense. And then, honestly, it was completely dropped in 2008 when the economy hit the tank," Bradshaw says. "We knew we were the preference in Georgia, but we didn't know a lot else. We knew it was with a biopharma business and there was some speculation about Baxter being among possible companies, but there was nothing confirmed by Deloitte or the state. I don't believe the state knew either at that point, but everyone knew it was real because of the seriousness that Deloitte had gone through to get it down to the preferred site in Georgia and the preferred site in North Carolina."

Bradshaw says the project was "completely dead" for two years. No one knew if it would be revived, he says. Then a call came in late 2010.

"We were very pleased two years later to get a call that they were re-launching their pursuit," Bradshaw says. "It was active all through 2011 pretty intensively, and they were also looking at the other site all the way to the end. It was pretty consistent and to us, that's a meaningful thing. It was a very continuous, healthy and managed process."

The company's identity still remained a mystery to TPA and the JDA until late 2011 or early 2012 when suspicions grew that it was Baxter.

"We looked at it together and basically agreed on the parcel," Bradshaw says. "Once we understood the scope and size, there was a very logical location. In the later stages, they had an engineering team come and do a much more critical evaluation."

Baxter also did a lot of market and work force evaluations, he says.

"They had a team of people who came in blindly, and they were assisted by the state," Bradshaw says. "They did interviews with other large employers in the region to understand things about the work force and what their experience had been in the area. I am assuming these were positive. It's an example of so many things you don't control in a process like this. There are so many components that have to be considered."

Sweet Project By Any Name

"On the education side, Baxter's people who deal with training met specifically with different groups in Georgia's technical education program, the state's QuickStart program and Perimeter College's Newton campus," says Bradshaw. "We didn't have direct access to the company except the times we arranged site tours. In the early stages, we didn't know who was a consultant, a company employee or somebody just along for the ride."

"I think someone had a sense of humor with that one," says Paul Michael, who directed TPA's efforts with the project.

Stanton Springs is spread over parts of three counties: Newton, Walton and Morgan. Jasper County was included in the project because of other agreements with Newton County. Newton and Walton Counties each have a 37.5-percent interest in the park, Morgan has 15 percent and Jasper 10 percent, Verner says.

"It has worked out well," Verner says. "All the counties have managed to pay their share. There have been tough times in recent years to meet our obligations, but they have all stayed true to their commitments. Now it is about to pay off.

Cummiskey says the state has long pinpointed Stanton Springs as a prime industrial location. He says it stood out quickly from Baxter's perspective.

"Georgia has had a lot of success with small and medium biotech companies and North Carolina has had success with larger companies. The challenge for Georgia was getting the company comfortable with QuickStart. To me, that was the driving factor with the company. We knew for a while it was basically a two-horse race, and in my mind, we always knew we had a good chance at it."

Cummiskey says Gov. Deal wants life sciences to be a strategic industry for the state, and advised an aggressive, but prudent, pursuit of Baxter.

"Companies like Baxter and other bioscience companies in the past have been going to North Carolina for its history and its work force," Cummiskey says. "And give them a lot of credit. Because of Baxter we will see a lot more opportunities, and it will help us create a higher amount of interest in Georgia." 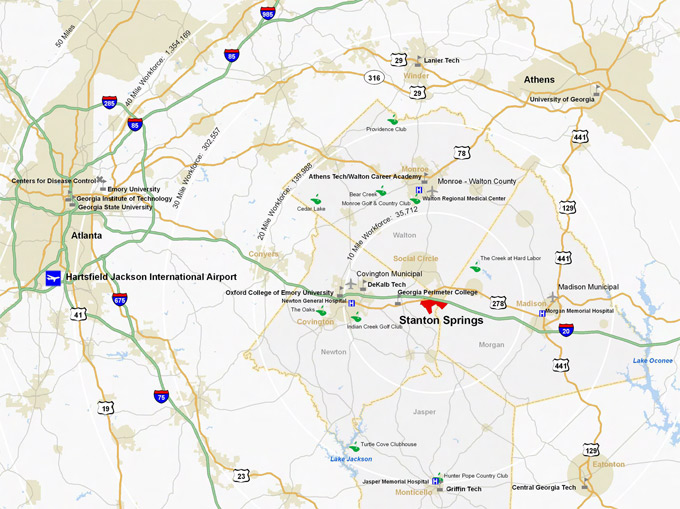 Baxter International’s new site in Covington’s Stanton Springs industrial park is close to both Atlanta’s Hartsfield-Jackson International Airport and the University of Georgia in Athens.