Research on the value of research calls for further research about location. 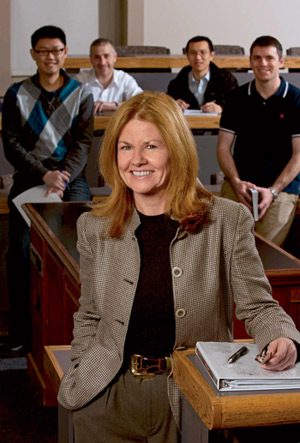 ooking for a way to apply the ideas behind "Moneyball" to evaluating R&D effectiveness? Look no further. Or, rather, keep looking deeper.

In the May 2012 issue of Harvard Business Review, Anne Marie Knott, a former Hughes Aircraft engineer who serves as professor of strategy at Washington University's Olin Business School in St. Louis, has published "The Trillion-Dollar R&D Fix." Using analysis of 2010 financial data from some 1,500 firms, she suggests that, had the nation's top 20 public firms used her organizational IQ tool known as the research quotient (RQ), they could have added nearly $1 trillion to their market value.

As she explains in the article, the RQ adds a new element to classic calculations of capital and labor productivity. The process involves taking several years' data on revenues and annual expenditures on PP&E (property, plant, and equipment), labor, and R&D, converting them into logs and then running a regression analysis to determine the RQ, with a score of 100 denoting the average R&D exponent of the equation across all firms.

Knott, who also offers business guidance via her firm amkANALYTICS and her consulting practice at Berkeley Research Group, has written that she hopes "the RQ measure can do for R&D what hospital report cards are doing for morbidity, and what Sabremetrics is doing for baseball."

In an interview from her office in California, she says while the initial RQ ratings were able to be calculated using publicly available data, she's only just beginning to dig into the data resident in individual firms, in order to evaluate best practices more precisely — including the influence of physical location on RQ. The main problem, she says, is there simply haven't been many good measures of R&D productivity in the past.

"Most of the questions I want to answer, I don't have data for," she says. "I don't have data on a wide swath of firms to see their R&D practices. I'm filing a proposal to work with Census data, particularly the BRDIS [the National Science Foundation's Business R&D and Innovation Survey], so I can start to answer these types of questions."

She was fortunate, however, to work with exactly that type of deeper data from Belgium, derived from a regular community innovation survey conducted within the European Union. She says the data do tend to suggest that maintaining multiple locations across different geographies is beneficial.

"Measures of diversity tend to correlate to higher RQ," she says. "Having more locations is useful, inferring that it gives you access to a broader set of knowledge. They're not sticking a facility somewhere, but realize they need a particular kind of knowledge, and so they build a facility there."

As she writes in the HBR article, the National Science Foundation study she conducted with Bruno Cassiman of IESE Business School suggests that "RQ is positively correlated with the number of markets a company sells to outside its home region (export breadth), the number of locations for R&D activity (technical breadth), and the number of product lines (product breadth)."

In addition, "In-house research trumps outsourced R&D. RQ is negatively correlated with cooperative R&D, and the correlation between RQ and R&D is higher for internal R&D than external R&D."

While her research has not focused primarily on biopharma, Knott knows how tough a game it is, given circumstances involving patent expiry. Asked about contracting out to CROs, she says, "My sense in general is when you get disconnected from elements of the research and manufacturing processes, you lose the feedback you get when there are problems. All of that gets collected by the organization doing that activity, and they can benefit, but you will not get the benefit of whatever they learned."

One study Knott wants to conduct is to see what happens to the RQ of firms who outsource manufacturing as well as R&D. Her past research indicates that the loss could be significant, as the learning curve from incremental product development processes disappears.

"It's important to have a tight link between manufacturing and development," she says. And that could imply tight location ties.

Thanks to hard-to-obtain access to plant-level data retained by the U.S. Census Bureau, MIT Sloan School of Management Prof. Xavier Giroud recently found that companies invest more in plants located closer to headquarters and that those plants tend to be more productive. But proximity, he says, needs to be defined by travel time, not geographic distance.

Combining plant-level data with airline data in the U.S. from 1977-2005, Giroud analyzed how the introduction of new airline routes affected plant investment. It turned out that a new direct route led to an increase in plant investment of 8 percent to 9 percent. Further, he found that plants' total productivity increased by up to 1.4 percent.

In both cases, the effect was only seen when the new route reduced travel time by at least two hours round trip. The larger the reduction in travel time, the stronger the effect. He also noted that the impact was stronger for plants whose headquarters had fewer managers available to monitor and acquire information about plants. Likewise, the effect was more visible in the earlier years of the sample period when other means of exchanging information such as the Internet, corporate intranets and videoconferencing were less available.

"The increase in investment and productivity is likely a result of an improved ability to gather information and provide monitoring at plants," says Giroud. "If your managers are very close — or can easily travel to your plant site — then they can learn more about your plant and supervise you more, leading to increased investment and productivity."

In an interview, Giroud says the access to the data involved an arduous security clearance and approval process that took up most of a year. But the payoff was insight that "allows you to go within the black box of the company and look at the plant-level data."

The trend in life sciences R&D over the past several years has been to cultivate more partnerships with universities, contract research organizations and other institutions, in part because of the significant PP&E overhead. But Knott's research suggests, she says, that "overall results on collaboration were kind of negative," especially if the partner is a university, a customer or a competitor. However, she posits, doing R&D with government institutions or with suppliers helps.

The detrimental effects of R&D cooperation with competitors are not surprising, she admits. More generally, says Knott, "If I were to interpret the overall effect of cooperative R&D, I always thought of it as kind of cheating. The value of doing everything on your own is you make mistakes, learn from them, and have spillover effects you can capture in other parts of the firm."

Though not an expert on university/company partnerships, Knott says of the current atmosphere, "the sense I get as I talk to people at universities is that the universities still have the wrong mindset. They'd rather extract a big portion from a small pie than increase the pie. They'll fight over crazy things like the royalty at the expense of having more firms license with them."

In fact, one of her own strategic concepts was at the center of a patent battle with a university when she asked for the rights.

"They said I could have them for only 15 percent," she says. "I thought, 'This is crazy.' Normal royalty rates are 5 percent to 7 percent. They would not budge. They're run by lawyers, who think entirely differently than the way entrepreneurs think."

Below, ranked by RQ, are the ratings and R&D spends of selected life sciences firms, using the online tool provided by Harvard Business Review. Below that list is a selection of recent R&D-related facility investments tracked by Site Selection. Many involve direct proximity of more functions than just R&D.

While further study is forthcoming, Anne Marie Knott says co-location of R&D with manufacturing and other functions appears to benefit a firm’s RQ.