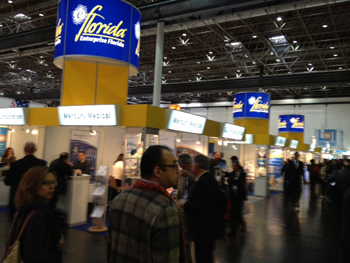 ichael Schiffhauer, vice president, international trade & field operations for Enterprise Florida, read our recent “Drawing A Crowd” article with great interest, as it highlighted states’ attendance at the Medica conference in Dusseldorf, Germany. “I applaud you for getting this information out stateside to the business and economic development community,” he writes. “It is very important, as it pertains to export sales generated by the U.S. medical industry and the FDI opportunities that the US is attracting.”

The Florida Pavilion is the largest of all state pavilions at Medica. “We operate on a 100-percent cost recovery basis,” writes Schiffhauer. The pavilion, he says, “is so large that it is often mistaken by foreign nationals as a country pavilion sandwiched between the U.S. and U.K. pavilions.” Within the Florida Pavilion were 22 booths exhibiting medical companies, along with a full service lounge, two private conference rooms and Wi-Fi to support the companies. Forty-five Florida medical companies in all exhibited throughout the show. “Florida, with 900 life sciences companies is now ranked third in the nation in concentration of the medical device companies,” says Schiffhauer.

Solid research insights can be gained from the resources at the National Science Foundation’s National Center for Science and Engineering Statistics. In September, for instance, newly developed information from the Research and Development Data Link Project — a joint project of the National Science Foundation (NSF), U.S. Census Bureau (Census), and Bureau of Economic Analysis (BEA) — reveals new insights on the U.S. R&D activities of multinational companies (MNCs), such as the character of R&D work performed by these companies (basic research, applied research, and development). Additional new details on the R&D performed by MNCs, such as state location and technology focus, will be available in detailed statistical tables available in the forthcoming report “International Investment and R&D Data Link: 2004–07.”

Matching company records showed that U.S. MNC parent companies (many of them life sciences firms) funded 88 percent of their U.S. R&D from their own (and other nonfederal) sources in 2007; 12 percent was federally funded. U.S. affiliates of foreign MNCs funded 96 percent of their R&D from nonfederal sources. MNCs with U.S. facilities employed 810,000 R&D employees (80 percent of U.S. industrial R&D employment), and they performed $210.7 billion in R&D in 2007.

According to the FMI 2013 U.S. Construction Markets Outlook report issued in late November, “health care construction growth has taken a bit of a breather in the last two years, but the market will recover, thanks mostly to the growing needs of aging baby boomers. While we expect only 3-percent growth in 2012, that will strengthen to double digits by 2015, achieving record highs around $52.6 billion. Uncertainty and conservatism in financial markets as well as political decisions concerning the Health care bill’s future have put a chill on new construction, but renovation continues strong. Much new construction will focus on ambulatory facilities and consolidation of small physician-owned facilities, in large part due to reduced payments for Medicare.” -Health care construction dropped 10 percent in 2010 and was flat in 2011.

One week saw two big life sciences projects come to New York State. On Nov. 30, Protein Sciences Corp., a vaccine and biopharmaceutical company, announced it would make a multi-million dollar investment to establish manufacturing and development operations at their Pearl River Campus in Rockland County, where an initial 50 jobs could triple over the next decade. The investment will establish a production line for Flublok®, including machinery and equipment, engineering and process validation. The Company will initially lease two buildings covering 83,000 sq. ft. Protein Sciences has developed an innovative cell-based platform technology (BEVS) that is a powerful tool for producing high quality vaccines and biologics with speed and precision. Flublok, the world’s first recombinant influenza vaccine, will be Protein Sciences’ first product manufactured at the Pearl River facility. Flublok is under final review by the U.S. Food and Drug Administration; approval is anticipated no later than mid-January 2013.

The 550-acre Pearl River campus, owned and operated by Pfizer, is a leading site for vaccine research, as well as key aspects of biologics research, and is home to one of Pfizer Inc.’s five global R&D centers. Empire State Development will provide Protein Sciences with $2 million in tax credits through the Excelsior Jobs Program that is designed to incentivize Protein Sciences to create 100 net new jobs by the end of 2017 and sustain the employment level through 2023.

On Dec. 4, Gov. Andrew Cuomo announced that New York will invest $50 million in biomedical research equipment and facilities, and has secured an agreement from a private company, Albany Molecular Research Inc. (AMRI), to locate on the Buffalo Niagara Medical Campus a new drug discovery R&D center. The investment, $35 million of which will go towards new equipment and $15 million of which will go towards improving existing lab space, will leverage $200 million in private investments and create 250 jobs. More details on this development as well as the Buffalo Billion Investment Development Plan can be found here. 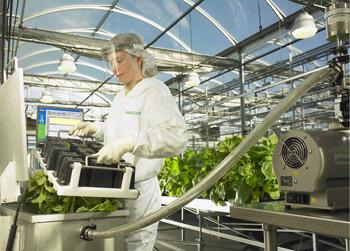 Medicago produces vaccines from plants such as tobacco and alfalfa.
Photo courtesy of Medicago

A Quebecois company familiar to Site Selection readers — vaccine firm Medicago Inc., based, in Quebec City — together with Folia Biotech announced this week the receipt of $415,000 in financial support from the Quebec government and the municipality of Quebec City to fund a feasibility study for a unique biopharmaceutical production project, known as BioProduction21, part of the Quebec Region's Life Science ACCORD Cluster. Medicago and Folia will invest a total of $255,000 in the first part of this initiative, worth approximately $670,000 in total, which is intended to assess the feasibility of developing a globally recognized, high-value-added bioproduction cluster of excellence. Québec International will act as a support organization, mandated to manage the financial assistance.

“The Quebec City area, which stands at the forefront of the vaccine and biotechnology industry, is a fertile setting for scientists, leaders and innovative companies working to carve an enviable position in a high-growth market,” said the company. “The world vaccine market alone is expected to reach US$30 billion in 2013. Development of this bioproduction cluster of excellence, coupled with the existing synergy among various companies, will sustain the reputation of Quebec's vaccine industry. In concrete terms, product manufacturing and marketing as well as the eventual installation of state-of-the-art industrial infrastructure will reflect the leadership position of Quebec and the National Capital region on the vaccines market.”

In October, Mississippi Gov. Phil Bryant announced that expanding the University of Mississippi School of Medicine and adding 1,000 physicians to the state’s work force are part of his vision for strengthening Mississippi’s economy by investing in health care. The Mississippi Development Authority will award $10 million in Community Development Block Grant funds to expand the school. Bryant is encouraging new development in the state’s larger medical regions through the Mississippi Health Care Industry Zone Act. The legislation, part of Bryant’s ‘Mississippi Works’ agenda, became law this year and provides incentives to certain health care-related businesses that locate in a certified health care zone.

The nation's largest long term care association, the American Health Care Association and National Center for Assisted Living (AHCA/NCAL), announced this fall that Kansas Governor Mark Parkinson has been selected as its next president and CEO. Parkinson will begin his term with AHCA/NCAL in January following his term in office. “In this new era of health reform, Governor Parkinson's deep background in this sector coupled with his policy expertise, will serve our members well as we look to future challenges,” said Robert Van Dyk, chair of AHCA's Board of Governors. "America's long term care needs will only grow in the coming years as Baby Boomers age. A policymaker who knows how Washington works, and as the owner and operator of several skilled nursing and assisted living facilities, Mark will be that measured voice to speak on the elderly's behalf.”

A recent Washington Post report on the drug industry’s influence over research prompted this response from GlaxoSmithKline, and this thorough riposte from Pharmaceutical Research and Manufacturers of America (PhRMA) President and CEO John Castellani.

A new report from PwC, “Pharma 2020: From vision to decision,” says “the challenges of rising customers expectations, poor scientific productivity and cultural barriers need to be addressed.” Among its findings: “Currently, roughly more than 85 percent of the health budget goes on healthcare services and less than 15 percent on medicines — so if the industry can reduce spend on costly medical services and procedures, PwC estimates that its share of healthcare expenditure in these countries could rise to 20% by 2020.