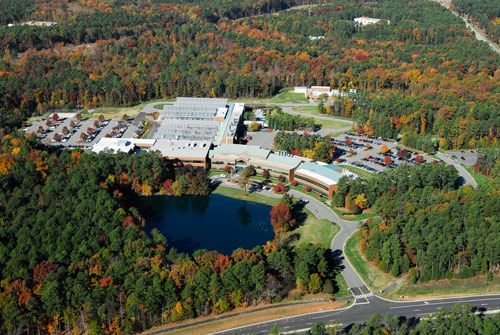 BASF employs about 780 at its Research Triangle Park campus, which will now welcome the relocation of its Plant Science headquarters from Germany.
Photo courtesy of BASF Plant Science.
E

urope's reluctance to accept genetically modified foods is giving a boost to the fast-growing ag-bio sector in North Carolina. BASF announced on Jan. 16 that it was retreating from the European plant biotechnology market in favor of markets in North and South America. In the process, the company plans to move 123 positions to its Research Triangle Park campus over the next two years.

The headquarters of BASF Plant Science will be moved from Limburgerhof, Germany, to Research Triangle Park. The company will halt the development and commercialization of all products that are targeted solely for cultivation in the European markets. These include genetically modified starch potatoes (Amflora, Amadea and Modena), a potato resistant to the disease late blight called Fortuna as well as a late blight-resistant starch potato and a wheat variety resistant to fungal disease. To maintain all options for the potato products, BASF Plant Science will continue the regulatory approval processes for the products already started.

"We are convinced that plant biotechnology is a key technology for the 21st century," said Dr. Stefan Marcinowski, a member of the Board of Executive Directors of BASF, responsible for plant biotechnology. "However, there is still a lack of acceptance for this technology in many parts of Europe — from the majority of consumers, farmers and politicians. Therefore, it does not make business sense to continue investing in products exclusively for cultivation in this market . .. We will therefore concentrate on the attractive markets for plant biotechnology in North and South America and the growth markets in Asia."

BASF's RTP campus comprises 125 acres (51 hectares) with about 40,000 sq. ft. (3,960 sq. m.) of greenhouse space. BASF operates two business units at RTP, Plant Science and Crop Protection, with a total of 780 employees. About 200 are with the Plant Science division.

BASF Plant Science is part of a burgeoning collection of companies in plant biotechnology in the RTP. These include Bayer Crop Science and Syngenta. BASF Plant Science's primary partner is St. Louis-based Monsanto, which operates some greenhouses in RTP. Bbut the company also has other collaborations, such as a partnership with Bayer related to rice.

"We have a number of different partners," says Fran Castle, BASF Plant Science spokeswoman. "Our business strategy is that we are a technology provider. We currently have a partnership with Monsanto and it's a very strong partnership in terms of developing traits for yield and stress. As a partner, they will take products to commercialization."

BASF's partnership with Monsanto includes development of corn, soy, cotton, canola and wheat. Castle says acceptance of genetically modified crops is much lower among consumers, farmers, politicians and government authorities in Europe than in the U.S.

"We do not see this acceptance changing in the near term," Castle says. "We are focusing our business on growing markets. If you look at surveys of farmers here in the U.S. as well as in South America, there is a high percentage of acreage that is growing genetically enhanced crops. When you look at the realities of food production needed in the next decade and on out, many technologies, including plant biotechnology, will be needed. There is a limitation on land, obviously, so you have to get more out of plants than is currently possible."

Currently, 157 employees work for BASF Plant Science in Limburgerhof. The company plans to close its sites in Gatersleben, Germany, and in Svalöv, Sweden. Currently 57 people work in Gatersleben and six in Sweden. The company plans to transfer 123 positions from Limburgerhof and Gatersleben to other BASF Plant Science sites, mainly RTP, and to reduce 78 positions over the next two years. BASF will maintain research facilities in Germany and Belgium.

Castle says the company has not determined how many employees will transfer to RTP and how many might be new hires.

"This is another nail in the coffin for genetically modified foods in Europe. No one wants to eat them and few farmers want to grow them. This is a good day for consumers and farmers and opens the door for the European Union to shift Europe to greener and more publicly acceptable farming."