Even as it moves into its new headquarters in Greater Philadelphia,
Renmatix is ready to move on and select a location for its first industrial-scale plant. 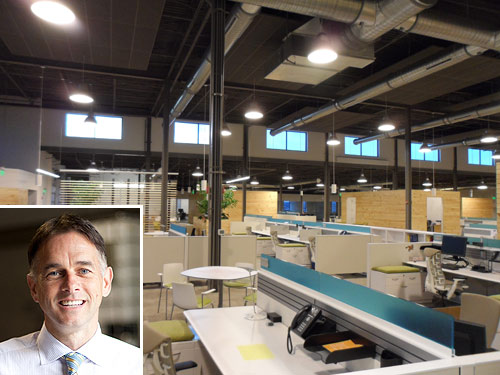 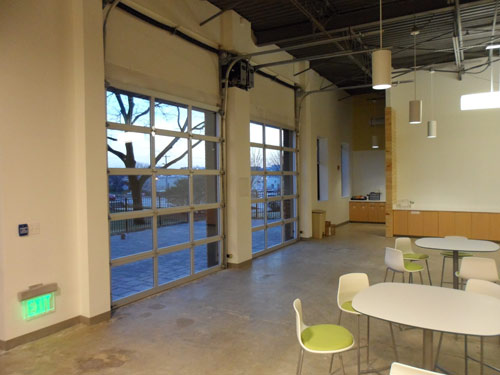 Among the distinctive features of the open-area design for Renmatix by KlingStubbins are garage doors added for access to an employee patio.
Photo courtesy of Hollister Construction Services

'd take this over a new building any day."

That's what Mike Hamilton thinks of his company's new headquarters and technology center in a nearly 60-year-old former GE building in King of Prussia, Pa.

Hamilton is CEO of Renmatix, a young and growing producer of cellulosic sugars for the global renewable chemical and fuels markets. Working with building owner Brandywine Realty Trust, architect Pier Derrickson of KlingStubbins and contractor Hollister Construction Services, the Renmatix team just saw the completion of the headquarters fit-out.

"I liked it because it had the character in the interior, an industrial feel to it, a great location and, compared to the alternatives we had, it would allow us to have our own identity," says Hamilton, who was recruited to lead the company after 20 years handling various responsibilities around the globe for Rohm & Haas.

Hamilton says the architects were able to apply their progressive approach to transform a rough industrial setting into a new home for the company. "I'm thrilled with how it looks, the message it sends, the way it allows our people to work. I think a little bit of history in a building, and the fact it may have been homely, is actually very appealing, because these sites can be brought back to a whole new life. I like older homes and buildings, where you can have a new appearance, but retain their distinctive character."

"A lot of people were skeptical in the beginning" of the project, says John Bickel, president of Hollister Construction Services Pennsylvania, including vendors and subcontractors. "Little by little, what Kling envisioned with Renmatix started to come alive. It turned out great."

One of the distinctions of the former GE space was a vault with a double-block wall almost two feet thick, with half-inch steel plate doors on it. Nobody seemed to know what it was used for. But all seemed to know that the space and the design were a happy match.

"I think it makes sense," says Bickel when asked about the growing trend of turning nondescript light industrial stock into lively space that is super-descriptive for a company's identity. And it's not just about image.

"Look at the costs," he says. "If you're going to look at a long-term lease, and you want to make it beautiful, work the numbers and it makes sense. You put more into it, but at the end of the day, the spend is much less."

"You'll see the mad scientists at work," jokes Bickel. "The office is one thing, but the real meat and potatoes is the science."

With its move to Pennsylvania after getting its start in Kennesaw, Ga., Renmatix hopes to grow from its current 20-person payroll to 50 by the end of 2012 and 150 by the end of its third year.

Hamilton's 20 years working with chemical markets around the world for Philadelphia-based Rohm & Haas meant he was well versed in where good chemistry was done, starting right there in Philly.

"There is an abundance of chemicals talent," he says. "It's a hub for chemicals skill sets. As we were thinking about how we would build up the company over time, the key thing was how to put our hands into a pool of talented people we could convince to join our company, and to have a significant number of institutions as feeders of chemicals talent."

Hamilton says Renmatix will continue to cultivate the good relationship it has with Georgia Tech and other institutions in the Atlanta area. But it will also look to build new relationships with some of the respected schools in Greater Philadelphia that he says "are doing intriguing things with bio," among them the University of Delaware, Temple and Penn State University.

The focus from the beginning was on Greater Philadelphia and Delaware, Hamilton says. The company received helpful guidance from Paul French at Binswanger, and engaged in discussions with both the state (regarding incentives) and the eventual landlord, Brandywine. Hamilton says all parties helped in the structuring of a deal that allowed for the tenant improvements Renmatix wanted to make.

After a lease commitment was inked in July, construction began in early fall 2011, and the company moved in Dec. 1. Phase two of the project, the lab, will be starting in February, and a third phase will involved the building of a pilot facility to complement the company's facility in Kennesaw, Ga. Hollister's Bickel says the design phase and permitting for the pilot plant is nearly complete. All total, Hamilton says, the investment in King of Prussia will be in the "low double-digit millions."

Earlier this month the company announced a $50-million round of investment led by $30 million from BASF. The stage is now set for the next major site selection: an industrial-scale plant somewhere in the hardwood territory of the United States.

"Our solution is economic disruption to using corn or cane," says Hamilton of the company's "supercritical hydrolysis" technology. Renmatix uses a propriety process called Plantrose that turns lumberyard by-products into a sugar that can be used as a replacement for petroleum products. The technology makes it possible for the first time to produce industrial sugar in large quantities and at competitive cost from non-edible plant mass. Industrial sugars are important renewable resources for the chemical industry and can be used, for example, to produce biofuels or basic chemical products and intermediates by fermentative processes.

"The Plantrose technology could allow us in the future to broaden our use of renewable raw materials while improving the cost effectiveness of our value chains even further. In the partnership with Renmatix, BASF is pursuing a new direction while simultaneously underlining its corporate strategy of offering even more sustainable solutions," said Dr. Josef R. Wünsch, senior vice president Modelling, Formulation Research and Technology Incubation at BASF.

"To make that you need to start from oil, add a couple other intermediates, then sell it to Sherwin-Williams," he says. "We have bio-acrylic acid, so can replace the oil consumed or needed to make that. The beauty of that is that entire chemicals markets are predicated on petroleum derivatives. Over time, our sugars can be fermented. There is a significant amount of oil consumed to make chemicals. We can also, increasingly in the fuels markets, make ethanol and biobutanol via the sugar fermentation route, versus the current route of cracking it."

Which route will the company take to commercial scale production?

"We have been planning for our industrial-scale facility, and we feel we're ready for that move at this point," says Hamilton. Among the site selection criteria are access to hardwood biomass, ideally within a 75-mile procurement radius, and in an area where those hardwoods can be sustainably harvested.

"Secondly, does the infrastructure exist, in terms of loggers in the area, supply chain, available truckers and industrial experience?" says Hamilton. "We follow a pulp and paper industry profile in that regard. A lot of that infrastructure that exists for hardwood and hardwood chips becomes an important consideration." Those locations are still growing the trees and people still live there, he says, welcoming new renewable industries with open arms.

"Canada at some point would be part of our collection of facilities for sure," says the University of Western Ontario graduate, "but our focus at this point is very much the U.S. market."

Third, he says, comes the ability to cultivate a relationship with the state for the long term, to assess "the degree they're interested and want us and see the potential for what we're achieving."

Hardwood is the focus now, meaning a search scope encompassing northern and eastern territory, much of it mountainous. But in time Hamilton sees Renmatix technology applying to a wide range of biomass: "If I'm looking to to ag residues," he says, "it's going to be in the Midwest."

Asked about the scale of this first facility, Hamilton says the plan calls for producing 100,000 tones of sugar annually. "The capital expense would be in the range of $1.50 per kilo, so you're in the $150-million range," he says.

"We're far along in the study and process. We'll announce the choice for that site in the first half of this year." 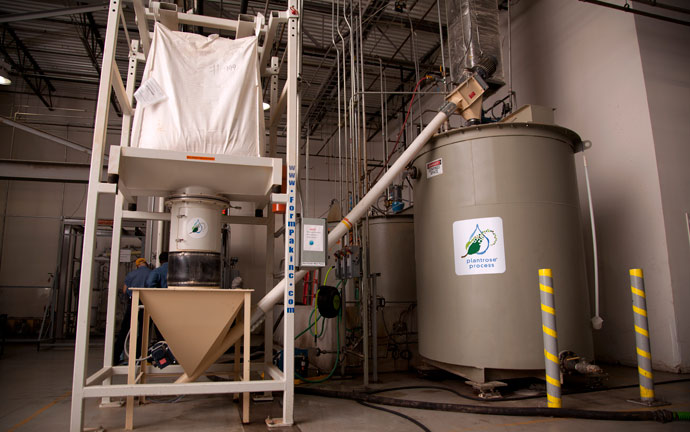 The original Renmatix pilot plant is in Kennesaw, Ga.
Photo courtesy of Renmatix