BIO proves to be fertile recruiting ground for states, provinces and countries.

Champagne flowed at the Team California stand at BIO in celebration of the state's stellar ranking in the latest Battelle report on the industry.
by JOHN W. McCURRY
T 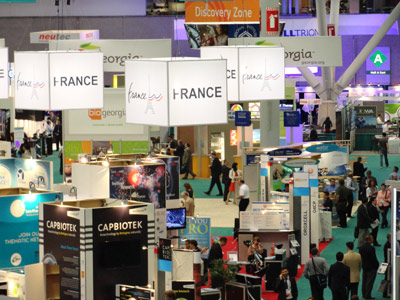 Attendance was up at this year's BIO held at the Boston Convention Center. State and national pavilions dominated the exhibition floor.

he BIO International Convention held in Boston June 18-21 — at least the exhibition part of it — seemed to be about economic development pitches by states and nations as much as it was about science. The 34 country and 26 state pavilions all served as recruiting beachheads, manned by personnel trying to lure companies to their respective areas.

Some of the personnel were at the governor level, although that participation was off by nearly half over 2011 as six governors came to Boston, compared to 11 in Washington, D.C. last year. All deployed the latest bit of good news to their advantage, including the findings of the latest Battelle/BIO State Bioscience Industry Development report. The research covered the decade of 2001-2010 and indicated the industry grew by 6.4 percent while adding more than 96,000 jobs. That came during a period that saw all private-sector industries hemorrhage more than three million jobs.

One governor particularly happy to see the Battelle study was Rick Perry of Texas, attending his first BIO as governor and second overall. He came to the 1997 BIO in Houston while serving as Texas Agriculture Commissioner.

"In a nutshell, we had a 19-percent increase in employment numbers over the decade in life sciences," Perry says. "We also had a 49-percent increase in research, testing and medical labs. The Battelle folks would tell you that we are in the top percentile of what I consider to be the two most important parts of the study with employment numbers and industry establishments."

Perry was also touting another bit of good news that happened to come the same week. The Texas A&M University System was awarded a contract to develop one of three U.S. Department of Health and Human Services Centers for Innovation in Advanced Development and Manufacturing. The $285.6-million contract includes an initial investment of $176.6 million from the U.S. government, with the remainder coming from the private sector and the state. Perry describes it as a "big deal" and was already using it as a recruiting tool at BIO as he and Texas A&M officials held meetings with interested companies.

"What they want to hear from me is that there is a commitment from the top down in the state," Perry says. "One of the companies we are talking to is a North Carolina company. I was with Dr. [Brett] Giroir, vice chancellor for strategic initiatives at the Texas A&M University System, and we were talking with a gentleman from North Carolina about how it would be in his company's best interest to relocate his company's entire operation to that footprint that is being developed at College Station."

Daugaard and Duguid Do Good

South Dakota Gov. Dennis Daugaard has attended BIO during both of his years in office. He held more than a dozen meetings with companies during his two days in Boston in June.

"Last year, I was feeling my way around a bit, but this year we have a rigorous schedule with CEOs of startups and existing biotech companies from J&J down to entrepreneurs who are investigating the location for a clinical trial or a manufacturing site," Daugaard says. "We are going every hour, on the hour, meeting with people, talking about South Dakota as a location. We have a couple of companies close to making announcements, but that's theirs to make. They are looking at something, so that makes me very hopeful."

Interest is coming from pharmaceutical companies as well as healthcare systems.

"We have a couple of fairly sizeable healthcare systems that have evolved from hospitals in South Dakota and now serve three to five states," Daugaard says. "It's a good base from which to conduct clinical trials. Sanford Health has purchased a sizeable building [in Sioux Falls] and is actively looking for researchers who want to co-locate with other researchers and have that 'aha' moment together."

Daugaard cites South Dakota's sound fiscal condition as a major draw for life sciences companies. He describes the state as having the best tax climate in the nation as judged by several independent surveys.

"Our state budget is balanced and we will end the fiscal year with a three-percent surplus. The 2013 budget has a built-in surplus, so that gives you a general idea of South Dakota's attentiveness to fiscal responsibility. Our budget is balanced and our long-term liabilities are covered, and companies will likely still find it that way in the future."

Other U.S. governors attending this year's BIO were Steve Beshear of Kentucky, Bev Perdue of North Carolina and Pat Quinn of Illinois.

Brad Duguid, Ontario's minister of economic development and innovation, was part of Canada's sizeable BIO delegation. He was also immersed in non-stop meetings with biotech firms.

"We are absolutely convinced we have made the right investments in fundamentals for biotech in Ontario," Duguid says. "As I look at the incredible cluster that has developed in Boston, I see no reason why Ontario at some point can't rival the size of this cluster. When we come to places like Boston and admire the great work that has been done to build a cluster, we go back all the more determined to build on our past successes."

Duguid touts Toronto's MaRS Discovery District as a major asset. He also says Ontario and Quebec are in the midst of "historic" collaboration in a number of areas, including biotechnology.

"I have a close relationship with Sam Hamad, the Quebec minister of economic development, innovation and export trade, and we are driving very aggressively toward what we call the Bioscience Corridor between Toronto and Montreal," says Duguid. "We recognize that on our own we are significant bioscience clusters, but together we are globally significant. There's an opportunity to accomplish even more if we work together."

The Biotechnology Industry Organization revealed the findings of several new public opinion surveys during last week's convention. Here are some of the pertinent results: