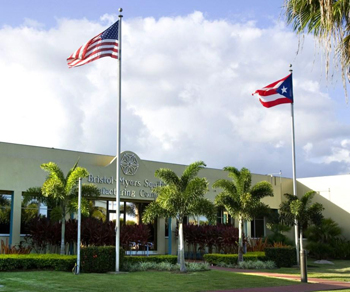 Any lingering industry uncertainty there may be surrounding Act 154 did not prevent Bristol Myers Squibb from announcing in July a $165-million, 100-job expansion at its manufacturing site in Humacao, Puerto Rico.
Photo courtesy of Bristol Myers Squibb

emember Puerto Rico’s Law 154, enacted by fiat by Gov. Luis Fortuño in October 2010, and called by one anonymous pharma exec “the last nail in the coffin” for his industry’s investment on the island? This Dec. 2011 analysis from the University of Puerto Rico Business Law Journal is authored by a Deloitte analyst, and pulls no punches.

But it appears that the IRS, pending resolution of some issues, will consider the island’s new excise tax as fundamentally a replacement tax for the generally imposed income tax, and as such is therefore eligible for a foreign tax credit for amounts paid. Corporate leaders seeking guidance on this and other facets of Puerto Rico’s business climate will want to consult the alerts and reports issued by McConnell Valdes, recently recognized by Chambers & Partners as the Puerto Rico law firm of the year.

Those seeking background on the topic will wish to consult this past coverage in Site Selection, as well as this IAMC white paper, which includes a case study of surplus property challenges on the island before Act 154 came into being.

Michigan’s University Research Corridor notes new momentum in biotech, led by the new Center for the Discovery of New Medicines in Ann Arbor.

While a new TEVA facility in north Philadelphia is apparently on hold, the TEVA Neuroscience project profiled in this space in July celebrated its ceremonial topping out with structural steel on Oct. 24 in Overland Park, Kan. Look for a profile of Johnson County, Kan., in the November 2012 issue of Site Selection magazine. 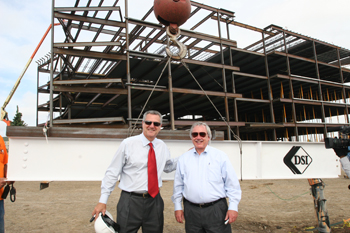 Abbott in August was reported to be close to locating a nutrition supplement plant in Jhagadia, Gujarat, near Bharuch. Although there are eight special economic zones in Bharuch, with two of them focused on pharma, Jhagadia’s SEZ is focused on glass and ceramics. However, it is also home to one of Bharuch’s largest industrial estates, at more than 1,707 hectares (4,218 acres). Abbott recently partnered with Indian pharma giant Biocon's Syngene unit on a new nutrition R&D center at Biocon Park in Bangalore. 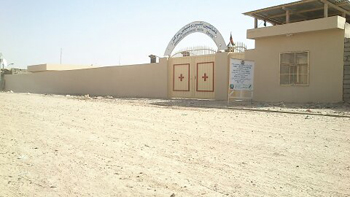 A new health clinic in Helmand Province constructed by AISG, Inc., an American-owned design/build construction, logistics, and security management firm that has accomplished over $400 million in U.S. Government (USG) and commercial work since the company's founding in 2004 in Baghdad, Iraq. As prime contractor, the company has completed more than 90 USG contracts in Iraq and Afghanistan without a single default.

“On September 15, 2012, facing down insurgent attacks and a diminishing U.S. military presence, AISG Construction completed a permanent health clinic with twelve treatment rooms serving 4,000 local citizens of Khan Neshin District – dead center in the ‘homeland’ of the Taliban,” read an Oct. 3 release from Marietta, Ga.-based AISG. "We have overcome the challenges of Ramadan in the hottest of summers and an extended Eid, followed by an increase in Taliban activities hindering the logistical support to bring materials to the site,” said AISG Afghanistan Country Manager Frank Guffey, a former Recon Marine. “We persevered, self-adjusted, and continued on the mission until completion." The company also continues to construct police stations and schools in Afghanistan.

California’s stem cell agency, the California Institute for Regenerative Medicine (CIRM), has released a new strategic plan. Among its goals are to attract the world’s best scientists, create partnerships with industry and “work closely with state and local governments to attract new research and biotech companies to California.”

A new report from London-based GlobalData on the “Healthcare, Regulatory and Reimbursement Landscape – Poland” says the aging population and associated disease burden “will impose a financial and logistical burden on the national healthcare system but will simultaneously drive growth in the healthcare market. Poland spent 7.7 percent of its Gross Domestic Product (GDP) on healthcare in 2010, which is lower than the amount spent by Western European countries such as the U.K., Germany and France in the same year.

The Colorado Springs Gazette reports that medical laser manufacturer Spectranetics has added 20,000 sq. ft. (1,858 jsq. m.) of leased space next door to its headquarters at Interquest business park and extended its HQ lease by 11 years. The 640-employee company employs 320 in Colorado Springs, and expects to grow staff by 5 percent annually.

Lingerfelt Companies this week celebrated the opening of the OrthoVirginia Building, located at the outskirts of Richmond in Chesterfield County. The $25-million, 70,000-sq.-ft. (6,503-sq.-m.) medical facility, owned by OrthoVirginia and HCA Virginia physicians, specializes in orthopedics and sports medicine treatment and rehabilitation. Construction began in August 2010.

Lingerfelt earlier this year announced that demolition had begun on the BioTech 3 building within the 34-acre (13.7-hectare) Virginia BioTechnology Research Park in downtown Richmond to make way for Phase I and Phase II construction of the BioTech 8 building, a $68.5-million project. Once completed, this three-building headquarters complex for Health Diagnostic Laboratory, Inc. (HDL, Inc.) will total 300,000 sq. ft. (27,870 sq. m.) and be valued at $100 million. “Since Health Diagnostic Laboratory was founded in 2009, we’ve grown from a staff of 11 people to almost 500 employees, with immediate plans to hire many more to work at our expanded facilities in the BioTech Park,” said Tonya Mallory, co-founder and CEO of HDL, Inc., at a March 2012 groundbreaking event called “The Big Chomp.” The anticipated completion date for the first phase is December 2012, followed by the construction of a second six-story building in 2013. 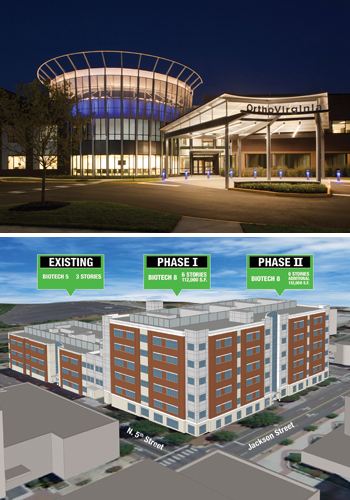 Lingerfelt’s Richmond-area activity includes the opening of the OrthoVirginia facility this month (top) and ongoing work at the HDL headquarters complex at Virginia BioTechnology Research Park in downtown Richmond (below).