Roche jumps to the Big Apple with
a new clinical research center. 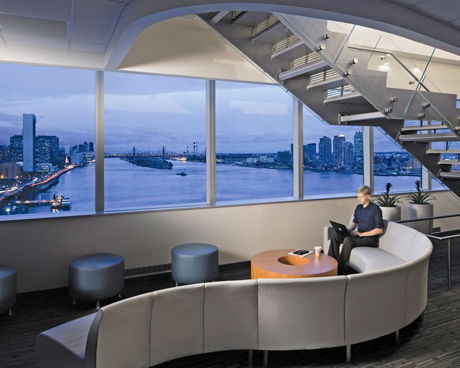 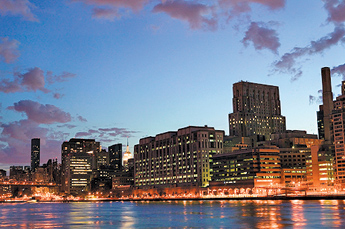 Among the assets gracing the life sciences landscape of New York’s East Side Medical Corridor is Weill Medical College of Cornell University.
Photo courtesy of Cornell

hen Swiss pharmaceutical giant Roche in late June announced a streamlining of its R&D activities, most of the work was pegged to stream back to sites in Switzerland and Germany, and closure of its 1,000-employee site in Nutley, N.J., was part of the package. But so was the still-pending location of a pharmaceuticals translational clinical research center (TCRC) somewhere on the East Coast. After looking at some 50 sites, Roche last week announced it would bring 200 jobs to the new center at the Alexandria Center for Life Science – New York City, formerly known as East River Science Park.

The TCRC will be the mission-critical presence for Roche Pharma Research and Early Development in the United States. Located in the heart of the East Side Medical Corridor, the location provides Roche with critical adjacency to New York City's nine major academic medical centers and its numerous ongoing clinical trials. Roche has signed an 11-year lease and anticipates moving its TCRC team to the approximately 421,000-sq.-ft. (39,110-sq.-m.) West Tower of the Alexandria Center for Life Science, which is expected to be delivered during the fourth quarter of 2013. The company will be the anchor tenant of this new phase of the park's development, occupying approximately 60,000 sq. ft. (5,575 sq. m.) in the top two floors of the new tower.

"We looked at several great properties in New York and New Jersey and selected the Alexandria Center for Life Science for its unique location as well as the dynamic, vibrant, and thriving scientific atmosphere it offers," said Mike Burgess, M.D., acting global head, Roche Pharma Research and Early Development.

According to a release from the State of New York, Roche will invest $13 million in the project, and bring 235 jobs to the site by 2018. Empire State Development (ESD) has agreed to provide Roche with $6.6 million in tax credits from the Excelsior Jobs Program.

"We are honored that Roche, our longtime client tenant in the San Francisco Bay Area, has selected the thriving New York City life science cluster and the Alexandria Center for Life Science as its platform to substantially enhance its collaboration and translational efforts," said Joel S. Marcus, chairman, CEO and founder of Alexandria Real Estate Equities, Inc. "Roche's move is the latest in the trend of biopharmaceutical companies establishing a mission-critical presence in New York City in order to collaborate with the large concentration of first-class academic medical centers along the East Side Medical Corridor. A strategic presence in New York City enables more rapid translation of 'bench to bedside' therapies in key areas of oncology, neuroscience, cardiology, immunology, and virology with the result of substantially reducing the economic cost to society of these devastating illnesses."

Darien Wilson, director of public affairs for Roche, says the company's site search stretched from Boston as far south as D.C., with an original batch of 50 sites culled to 36 viable locations. Then it was down to two each in New Jersey and New York, followed by one site in each state. The New Jersey finalist was a new life sciences hub being developed in the New Brunswick area by a coalition including Rutgers University, Robert Wood Johnson Medical Center and others.

Wilson says the two states' incentive packages were comparable, and "not a deciding factor." She says the Roche team worked closely with the offices of New Jersey Gov. Chris Christie and Lt. Gov. Kim Guadagno, and was "very impressed with the hub they're trying to develop" in New Brunswick. "The difference is we already have that existing in New York," she says. "But it certainly has a lot of potential, we believe."

Wilson says each of the final four sites made a presentation to Roche's executive management and site selection committee, with the Alexandria site winning out because of a strong collection of scientific talent, academic centers and biomedical industry in the vicinity. "And within New York in that area we have nine existing collaborations ongoing," she says, "versus one in New Jersey."

Wilson says the work at the new center will not be research, but phase-one and phase-two development via clinical studies with patients. The East Coast scope of the site selection was defined in part by the wish to offer positions to existing personnel at the Nutley facility, she says, noting that 200 employees from Nutley will be transferring to the new center, but will continue to work from Nutley until the new facility is ready.

"Fifty will remain at a location in New Jersey for more corporate-related functions," she says, supporting both the translational work and the pharma business in the U.S. "We have not decided where they will be."

As for the 119-acre (48-hectare) Nutley campus, Wilson says Roche is soliciting bids from interested parties, and will work with a joint commission led by the mayors' offices in Nutley and Clifton, N.J., to find a suitable buyer and tenant for the site.

"We've gotten interest, but haven't moved on anything yet, as we're hoping to work with this joint commission," she says, adding that the campus will be fully owned and operated by Roche until that buyer is found.

The Alexandria Center for Life Science was developed by Alexandria in a strategic relationship with the City and State of New York. The first phase of development, which included the LEED-Gold Certified, 308,000-sq.-ft. (28,613-sq.-m.) East Tower, opened in late 2010 fully leased to a diverse selection of tenants including Eli Lilly and Co., whose wholly-owned subsidiary focused on oncology, ImClone Systems Incorporated, is headquartered in the building; Pfizer Inc.'s Centers for Therapeutic Innovation; New York University's Neuroscience Translational Research Institute; and Kadmon Corporation, LLC. 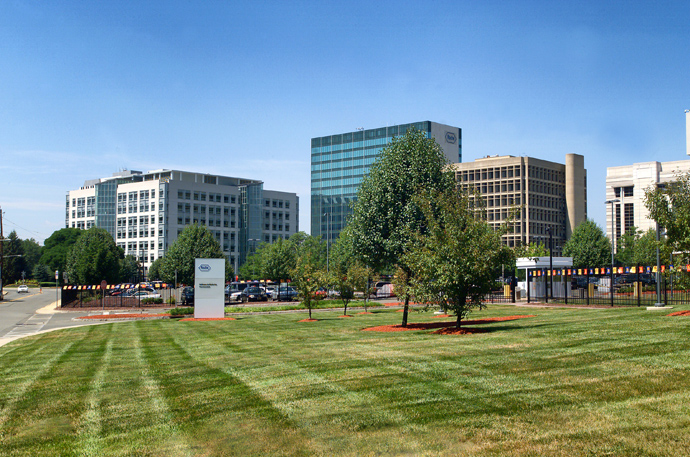 Roche will be working with a joint commission led by the mayors of Nutley and Clifton, N.J., to find a suitable purchaser for its 119-acre (48-hectare) campus in Nutley, which will be closing by late 2013.
Photo courtesy of Roche