Cerner's phenomenal growth has led it to commit to what
would be Kansas City's largest office development ever. 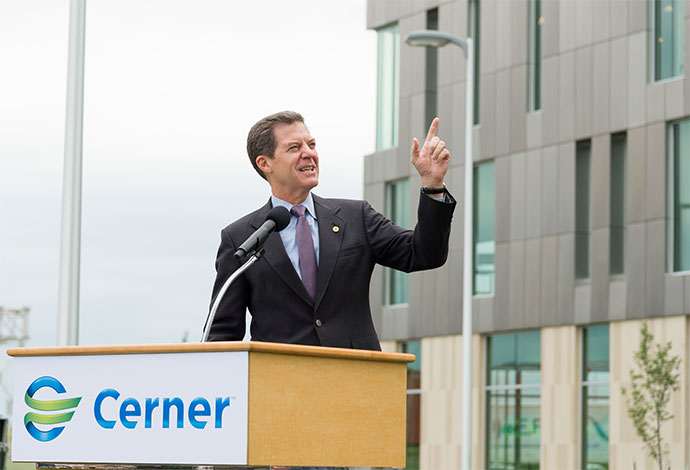 Cerner co-founder, chairman, CEO and President Neal Patterson speaks at the ribbon-cutting for phase one of the company's "continuous campus' (below) in Kansas City, Kan., earlier this month. Cerner, which saw 2011 revenues of $2.2 billion, is the world's largest independent health IT company. If the Greater Kansas City vision of Patterson and his colleagues keeps coming true, it figures to get even larger very soon.
Photos by Steve Puppe courtesy of Steve Puppe Photography and Cerner Corp.
by ADAM BRUNS
I 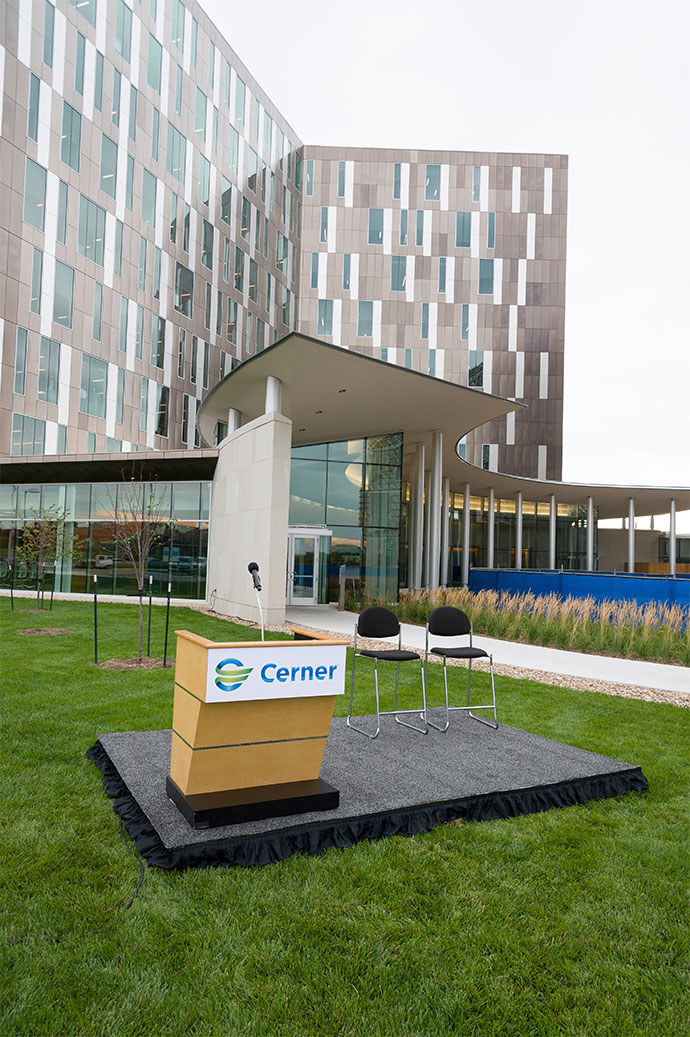 t was a few years ago that global healthcare information software and analytics firm Cerner Corp. was about to invest $1 billion at the blighted Bannister Mall site in southeast Kansas City, Mo., when it was suddenly pulled over to Kansas City, Kan., and Wyandotte County with its 4,000-job campus and expansion. The deal also included a soccer stadium and practice complex, conveniently placed nearby for two of the principals of the Kansas City Wizards Major League Soccer franchise ownership group: Cerner Vice Chairman Cliff Illig and Cerner CEO Neal Patterson. (The team rebranded to Sporting Kansas City in 2010, and its new stadium hosted the MLS All-Star Game last month.)

But KCMO and Cerner have continued their pas de deux ever since, and now things are looking up for the Missouri side. Cerner on August 1 officially entered into an agreement to purchase approximately 237 acres in the Three Trails Crossing region on the site of the former Bannister Mall, pending the completion of due diligence activities and the securing of appropriate financial incentives. The project is in a tax-increment financing district.

"The company plans to use the location as a site to accommodate expected growth," said the modestly worded statement. But the growth is anything but modest: The expanded campus, if constructed, would potentially house 12,000-15,000 additional associates upon full build-out.

The project would site next to Cerner's Innovation Campus, situated in its own TIF that was originally conceived in the early 1990s for growing Kansas City pharma giant Marion Merrell Dow. Cerner already employs 2,866 associates there, and a total of 8,794 in the Kansas City metropolitan area.

"Cerner's significant growth necessitates that we plan now to accommodate our future space needs," said Marc Naughton, CFO, on Aug. 1. Naughton added that if conditions to close are satisfied, it is anticipated the purchase would be completed by the end of 2013.

Cerner anticipates the extended campus would include on-site daycare, a clinic for associates, fitness facilities, food service and training spaces. It could also house future data centers as needed. A portion of the site may be made available to be developed as retail stores, restaurants, or a hotel. That's in keeping with developer Lane4's separately tracked mixed-use project that's been slowly chipping away at the Bannister Mall site for several years.

"This is a great step forward for the former Bannister Mall site," said Kansas City Mayor Sly James. "South Kansas City has been on an impressive forward trajectory in recent months but this site has remained an issue. Redeveloping the Three Trails Crossing region into a Cerner property will turn that area into a beacon of innovation."

Cerner systems are used by everyone from individual consumers, to single-doctor practices, hospitals, employers and entire countries. Its solutions are licensed by approximately 10,000 facilities around the world, including more than 2,700 hospitals. The company reported record second-quarter bookings of $935 million, and a backlog of some $8 billion in business.

"Our record bookings, strong overall results, and positive outlook reflect an ongoing favorable market environment for Cerner," said Neal Patterson, Cerner chairman, CEO, president and co-founder, in late July. "We believe our solutions and services are well aligned with the needs of health care providers as they face a growing list of measures and mandates that require effective use of information technology. Significant investments in research and development have positioned us well for the current market environment, and we continue to increase these investments as we believe ongoing industry shifts will create substantial opportunities for Cerner for many years to come."

And how. As reporters at The Kansas City Star describe it from unearthed TIF documents, the new Missouri campus at the former mall site, now christened Three Trails Crossings, would encompass 4.5 million sq. ft. across 14 buildings on 251 acres. Total investment by full build-out in 2024? $4.1 billion, with the company ponying up 70 percent of that total and the rest to come from TIF proceeds generated by the additional taxes the development would engender.

The TIF agreement would result in about $446 million of payments in lieu of taxes to local and state governments. The company is also reported to be pledging some $8 million toward a neighborhood improvement fund.

Next steps and further confirmation could come after a meeting with the city's TIF Commission that is scheduled to take place Sept. 11.

If Missouri-side officials needed any extra motivation to cement the Cerner commitment, they need only have glanced across the state line about 10 days ago at the company's ribbon-cutting for the first phase of the complex it's building in Kansas City, Kan.

"There are about 1,000 employees working at the first of the two buildings," says Cerner spokesman Matt Tidwell. "Ultimately that development is slated to add about 4,000 jobs to the Kansas City, Kansas, economy." The second building is slated to be complete by early 2014.

Some 70 percent of Cerner's 13,000 employees around the globe are employed in the Greater Kansas City area.

The two states have been engaged in a Kansas City-area economic development border war for a number of years, though public officials including Kansas Gov. Sam Brownback have made statements opening the door to a truce.

After Cerner's Aug. 1 Missouri investment announcement, Joe Reardon, the former mayor and CEO of the Unified Government of Wyandotte County and Kansas City, Kan., who negotiated the Cerner deal there, wrote in a Kansas City Star editorial, "Far too often in the context of this 'border war' we tend to frame a new development that's a gain for one local jurisdiction as a loss for another. Don't get me wrong, that can and does happen. This is not an example of such a deal.

"I can only imagine Cerner is told frequently that recruitment and hiring would be easier if it moved to 'greener' pastures," Reardon continued, calling for the region to align its economic development resources. "But this Fortune 500 company is committed to Kansas City - all of Kansas City. As such, its growth in jobs will provide the fuel that every region wants and needs to grow."

If the Three Trails Crossings plan moves forward, that percentage should skyrocket, and continue lifting the economies of two states along the way. 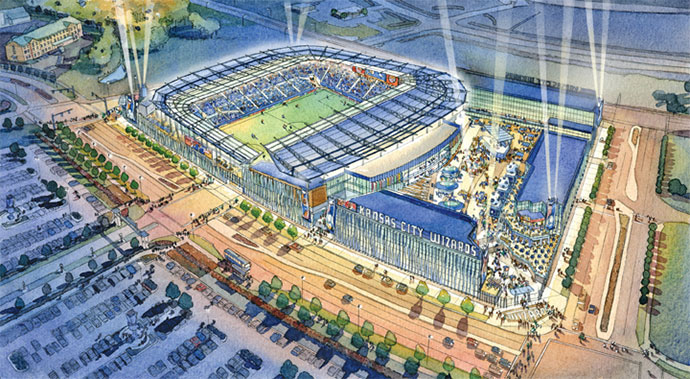 The first phase of Cerner's 4,000 job expansion in Kansas City, Kan., is now complete, including a soccer complex a few blocks away. A company expansion involving up to 15,000 jobs may soon be rising on the Missouri side of the state line.