The two halves of the nation's most famous mental health
complex move in tandem toward successful redevelopment. 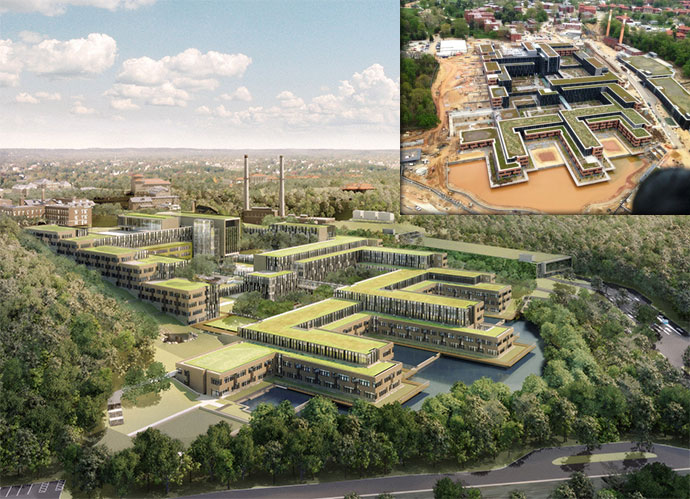 The U.S. Coast Guard Headquarters project was one of the largest construction efforts in recent Washington, D.C. history, including 160,000 truckloads of excavation and more than 1,500 caissons. The completed project features 500,000 bricks, more than eight million pounds of stone, 300 miles of electrical wire, and 55 miles of piping.
Photos courtesy of USCG and DHS
by ADAM BRUNS
W 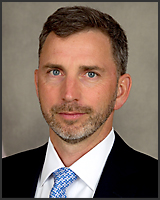 Dan Tangherlini, sworn in as GSA Administrator in July, served from 2006 to 2009 as Washington, DC’s City Administrator and Deputy Mayor.
Photo courtesy of GSA

At one time each of them was treated or held at St. Elizabeths, the asylum and mental health care complex first established in Washington, D.C., in 1855 as the Government Hospital for the Insane.

In that era, the use of the apostrophe to indicate possession was spotty at best - the lack of punctuation in the institution's name has simply stuck ever since. But Frank Zappa said it best when it came to this punctuation mark: "The crux of the biscuit … is the apostrophe."

An apostrophe, in one sense, is the addressing of an abstract symbol or idea, usually of undefined potential, says one dictionary (not Oxford's). But an apostrophe also signals who owns what. In St Elizabeths' case, that means who possesses which portions of the sprawling red-brick campus.

According to a recently completed history, the original acreage for St. Elizabeths was purchased by the federal government in 1852 from lumberyard owner Thomas Blagden and his wife, Emely Silliman, for $25,000. Blagden was the son of George Blagden, superintendent of masons at the US Capitol.

Today the west side is owned by the United States government, and is being redeveloped under the watchful eye of federal landlord the General Services Administration (GSA).

In late July at the site, Secretary of Homeland Security Janet Napolitano and GSA Administrator Dan Tangherlini officially opened the U.S. Department of Homeland Security (DHS) Consolidated Headquarters campus with a ceremonial ribbon cutting at the newly built U.S. Coast Guard Headquarters building. The opening of the new facility marks the completion of the first phase of the consolidation project on St. Elizabeths west campus.

"Today, we take a major step forward in making our ‘One DHS' vision a reality," said Napolitano. "Consolidating our facilities will increase efficiency and communication, while enhancing the Department's prevention, response and recovery capabilities."

"We are proud to provide the U.S. Coast Guard with a facility that will support the important work they do for the American people," said Tangherlini. "We are now one step closer to achieving a central campus for the Department of Homeland Security's headquarters at St. Elizabeths. The project also represents a significant investment in the District's Ward 8 community."

The ceremony marked the completion of the first phase, which consists of a 1.2-million-sq.-ft. Coast Guard headquarters, a 2,000-car parking garage, perimeter security, the renovation of several historic buildings, and infrastructure improvements throughout the campus.

DHS is planning to consolidate more than 35 office locations in the Washington area, further enhancing operational effectiveness, and leveraging the infrastructure investments GSA has already made in the St. Elizabeths campus to more efficiently manage DHS daily operations. GSA developed a master plan for the DHS Headquarters based on a determination that the St. Elizabeths west campus was the only site with the potential to meet the department's space and timeline requirements. GSA hired the architectural firm Perkins and Will to complete the site's preliminary design. In August 2009, the government let a $435-million contract to Clark Design Build Ltd. for the final design and construction of the project's first phase.

The Coast Guard is now moving some 3,700 military members and civilian employees currently housed in facilities along the Anacostia River in nearby Buzzard Point. The move is expected to take four months to complete. 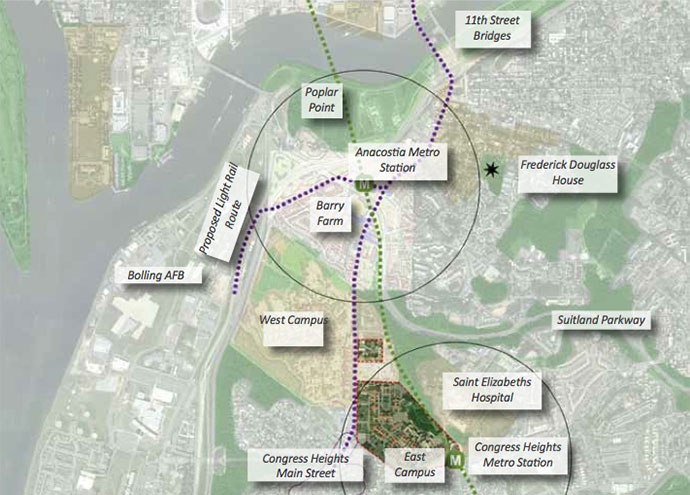 This map shows how the St. Elizabeths campus fits into a larger economic development context for the city.
Image courtesy of the City of Washington, DC

DHS component agencies currently occupy more than 7 million sq. ft. of office space at 50 locations throughout the Washington metro area. By consolidating DHS Headquarters at St. Elizabeths, the government will reduce the department's footprint to about seven or eight locations and eliminate a significant number of leases. When completed, the campus will host 14,000 employees, with a projected of 4.5 million gross sq. ft. of office and related space plus 1.5 million gross sq. ft. of parking space

The FY 2014 budget request includes $92.7 million in the DHS request and $261.5 million in the GSA request to continue the St. Elizabeths development with the renovation of the Center Building complex. The overall DHS consolidation and redevelopment project has a completion target of FY2026. According to press reports, its overall cost is now projected to surpass $4 billion.

The U.S. Department of Health and Human Services (HHS) and its predecessors controlled and operated the hospital from its founding in 1855 until 1987 when the East Campus and hospital operations were transferred to the District of Columbia (per the Saint Elizabeths Hospital and District of Columbia Mental Health Services Act of 1984). St. Elizabeths continues to operate as an inpatient mental hospital on the southern portion of the East Campus.

But the District's plan is for the property under its control to become a hub of innovation.

"Rich in economic promise, historic resources, and federal access, St Elizabeths East is one of the few remaining large redevelopment opportunities in the nation's capital - an opportunity to transform a 183-acre lot into a marketplace of ideas, innovation, and commercialization," says DC's master plan for the property. "Less than three miles and just a few Metro stops from the U.S. Capitol, St Elizabeths East invites a mixed-use development that simultaneously serves nearby communities, nearby federal office tenants, and the pent-up local demand for retail, residential, and office/educational uses - all enhanced by substantial District of Columbia investment and planning to support the surrounding neighborhoods and infrastructure of this incomparable campus.

In an interview earlier this month, Washington, DC Mayor Vincent Gray called the St. Elizabeths redevelopment a key project, along with redevelopment of the former site of Walter Reed Hospital. The projects are part of a larger vision seeking to turn the Anacostia waterfront from its past to a brighter future. Working in tandem with federal agencies such as the GSA helps. And it doesn't hurt that the current administrator of GSA, Tangherlini, used to be the city administrator for DC.

Though the two redevelopment sites are associated with healthcare, it certainly doesn't mean new healthcare development is not front and center in the city's economic development picture. The American Hospital Association is building a new corporate headquarters at the mixed-use CityCenter site. Gray says ongoing projects with a healthcare component include the redevelopment of the McMillan Reservoir and the highly ranked MedStar National Rehabilitation Hospital, which plans a new national center for brain injury and stroke rehabilitation and research. Institutions such as MedStar NRH, along with large employers such as the VA and the expanding Children's National Medical Center, are why "healthcare is one of our principal areas for redevelopment."

In May, Mayor Gray, Deputy Mayor for Planning and Economic Development Victor L. Hoskins and other officials broke ground for the new St. Elizabeths East Gateway Pavilion – a structure designed to serve a wide range of interim uses to the neighborhood as the historic St. Elizabeths East Campus enters the initial stages of redevelopment and workers begin arriving at new federal facilities on the St. Elizabeths West Campus.

"Today is a day I have long anticipated, along with many other District government officials, business leaders and everyday residents," said Gray. "This groundbreaking ceremony marks the start of implementation of a vision we've shared for St. Elizabeths East, Ward 8 and the entire East End of our city, and I'm thrilled that we are on track to have this facility completed by the fall."

Meanwhile, with regard to the innovation future, three respondents to a District-issued Request for expressions of interest will move to the next round of inquiry: Citelum USA (a US branch of the French lighting company), Microsoft and SmartBIM/Treasury Advisory Services. "In addition to demonstrating superior qualifications and financial feasibility, each of the selected respondents suggested programs with a potential for growth in educational and employment opportunities," says a recent press release.

Up to a dozen higher education institutions in the area have expressed interest in having a presence at St Elizabeths, says the mayor. Meanwhile, he says, the city is inching toward completing negotiations with Microsoft toward what he says would be the company's first innovation center not located in its hometown in Redmond, Wash.

"That is an eyebrow raiser and an eye opener," Gray says in an interview for the forthcoming September issue of Site Selection magazine. "For them to come here, especially in an era that has been economically and socially challenging, transcends any statement I can make." 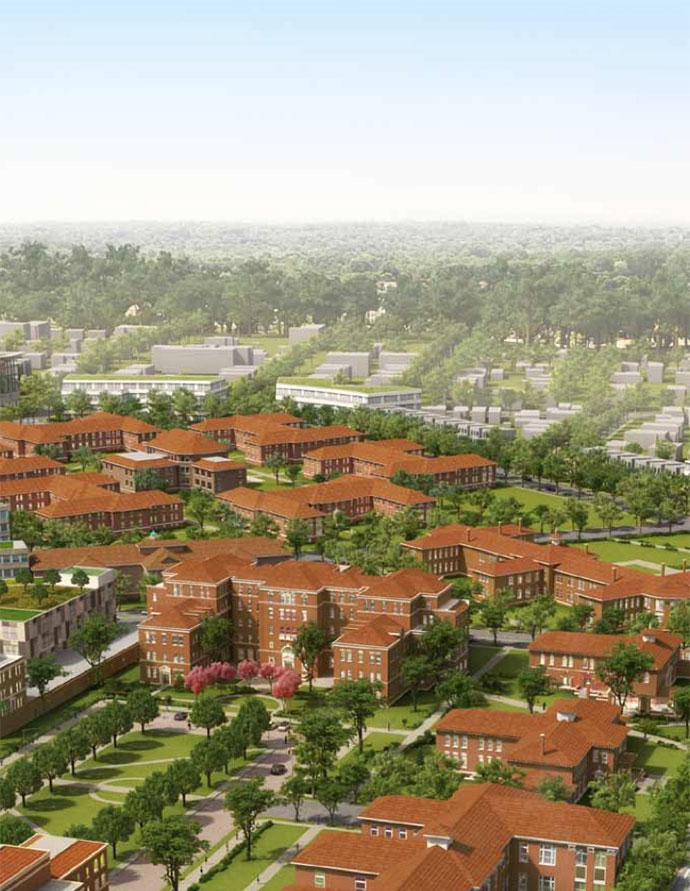 Around 250,000 sq. ft. in repurposed facilities will be utilized in the historic Maple Quad and CT Village parcels of St. Elizabeths for an academic anchor presence at the Innovation Hub envisioned for the site by DC officials and planners.
Image courtesy of City of Washington, DC