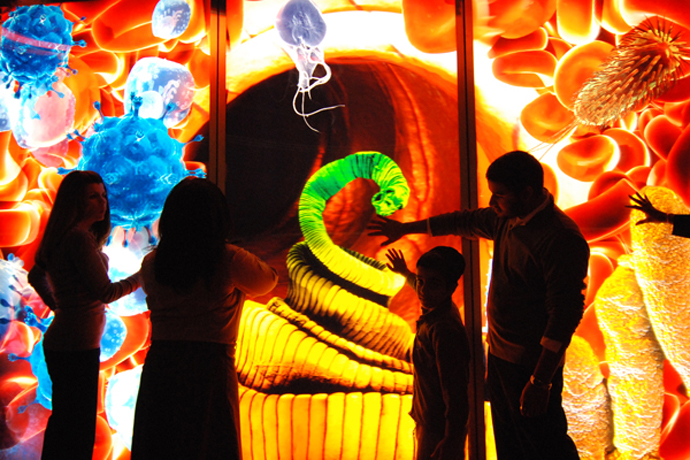 New Jersey’s life sciences leadership includes education at universities and at public institutions such as the Liberty Science Center, a 300,000-sq.-ft. learning center located in Liberty State Park on the Jersey City bank of the Hudson near the Statue of Liberty. Here, thanks to sponsorship from such companies as Pfizer, BD and Lysol, visitors to the “Infection Connection” exhibition explore the connections between humans and microbes and emerging diseases, and discover how science develops tools and technologies to prevent and treat infections.
Photo courtesy of Liberty Science Center
by ADAM BRUNS
W 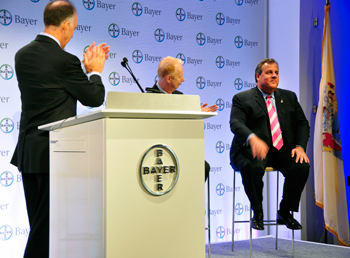 hen New Jersey Gov. Chris Christie in September signed into law the New Jersey Economic Opportunity Act, streamlining the state’s incentive programs to two, he did so on the heels of two ribbon-cuttings. One was for Panasonic at its Newark facility, and the other was celebrating the less ballyhooed first anniversary of Zoetis (formerly Pfizer Animal Health), which in 2012 chose Florham Park for its headquarters.

“We are committed to growing our business in New Jersey where we have access to a highly educated and diverse work force, which is essential to managing a global animal health company,” said Sandra J. Beaty, executive vice president, corporate affairs at Zoetis. “We want to thank Governor Chris Christie, Lieutenant Governor Kim Guadagno, and their administration for all their efforts to help create a favorable business climate in the state. We are proud to call New Jersey our home.”

“The decision by Zoetis to locate its global headquarters in New Jersey is further confirmation of New Jersey being not only an international center of excellence for the life science industries but also a growing hub for the animal health sector,” said Gov. Christie, noting that three of the leading global animal health companies call the Garden State home.

The New Jersey Economic Development Authority awarded Zoetis a Business Employment Incentive Program Grant of $19 million on Aug. 14, 2012. Under the terms of the grant, Zoetis has located approximately 400 employees at its 100 Campus Drive headquarters in Florham Park. The property is owned by KBS Real Estate Investment Trust II and managed by CBRE. Employees there support the company’s global business functions and its marketing and veterinary technical services operations in the United States and the Canada-Latin America region.

Zoetis, a $4.3-billion company with 9,300 employees worldwide, derives its name from the word “zoetic,” meaning “pertaining to life.” And the signs since the fall continue to indicate that New Jersey’s reputation as the “world’s medicine chest” is well earned.

On Dec. 11, the Board of the New Jersey Economic Development Authority (EDA) approved a significant Grow NJ award for Valeant Pharmaceuticals International, Inc. to incent the company to remain and grow in New Jersey. Valeant, which recently acquired Bausch & Lomb, whose core businesses include ophthalmic pharmaceuticals, was approved for a Grow NJ award of up to $39,502,500 over ten years to locate its combined US headquarters in New Jersey. The Bridgewater site is currently undergoing renovations and would ultimately house a combined work force of over 800 employees, with 274 retained positions and 550 new full-time jobs. Headquartered in Laval, Quebec, Valeant has approximately 15,000 employees worldwide

“The Grow New Jersey program is designed to make New Jersey an even more attractive prospect for corporations making major decisions about remaining or relocating here,” said EDA CEO Michele Brown. “The prospect of Valeant locating its combined U.S. headquarters here is exciting and important for our state. With the Board’s approval, New Jersey can help the company remain, thrive and grow in New Jersey.”

Both Valeant and Bausch & Lomb have existing Business Employment Incentive Program (BEIP) agreements provided by the EDA in 2003 and 2008, respectively. The company has reached an agreement with the EDA to end the existing grant agreements and use a sliding-scale recapture for a portion of the payments that are due. The modification was approved at a December EDA board meeting.

“We are committed to growing our business in New Jersey where we have access to a highly educated and diverse work force, which is essential to managing a global animal health company.”

Grow New Jersey is now the state’s main job incentive program. The enhanced program will support businesses looking to grow throughout the state and provide New Jersey with a more effective tool to spur job growth in targeted areas. As the EDA explains, to enable smaller businesses to qualify for incentives, the revised Grow NJ program expands geographic boundaries within which businesses can qualify for assistance and lowers capital investment and employment eligibility requirements. By lowering eligibility thresholds, more small and mid size businesses can now be assisted.

Four additional projects were also approved under the revised Grow NJ Assistance program. With Valeant’s Grow NJ award, these projects, located in Camden, Neptune, Newark and Jersey City, are slated to receive a total of approximately $92.9 million tied to the creation of 900 new, full-time jobs and the retention of more than 925 existing full-time New Jersey jobs at risk of being located outside the state.

Also this month, the EDA announced that 54 companies have been approved to share the $60 million allocation available through the State’s Technology Business Tax Certificate Transfer (NOL) Program in Fiscal Year 2014.

The program enables technology and biotechnology companies to sell New Jersey tax losses and/or R&D tax credits to raise cash to finance their growth and operations. Since the program was established in 1999, more than 490 different businesses have been approved for awards totaling $770 million. Each of the 54 applicants approved this year will receive an estimated $1.1 million, which is a 21-percent increase from last year.

"The NOL Program continues to be the most popular and the most effective support for these early-stage companies,” said EDA’s Michele A. Brown. “These companies have been able to raise capital and build their businesses in New Jersey as a result of this innovative program. This is exactly the kind of vital support this sector needs.”

Under the program, administered by the EDA and the Department of Treasury's Division of Taxation, New Jersey-based technology or biotechnology companies with fewer than 225 US employees may be eligible to sell net operating losses and research and development tax credits to unrelated profitable corporations for at least 80 percent of their value, up to a maximum lifetime benefit of $15 million per business.

Companies that benefited this year include:

The state’s role as part of the Greater Philadelphia economy even helps researchers in the field garner funds from entities outside state lines: Also early this month, Philadelphia’s University City Science Center’s QED Proof-of-Concept program awarded a total of $600,000 to life science and health IT researchers from Drexel University, Temple University and Rutgers, The State University of New Jersey, where Dr. Samuel Gunderson is validating a new therapeutic compound for pancreatic cancer. The QED Program was launched in April 2009. Twenty-two colleges, universities and research institutions in Pennsylvania, New Jersey, and Delaware participate under a common agreement that defines matching funds and intellectual property management.

The number of biotechnology companies operating in New Jersey increased from more than 300 in 2010 to more than 340 companies in 2012, an increase of more than 13 percent, and the number of employees increased from approximately 15,000 in 2010 to an estimated 16,400 in 2012, an increase of 9.3 percent, according to the results of an industry survey conducted by BioNJ, the trade association for the biotechnology industry in New Jersey, and Ernst &Young.

As the list below of NOL beneficiaries illustrates, the biotech pipeline in New Jersey continues to flow.