A French CRO hits the ground sprinting in North America. 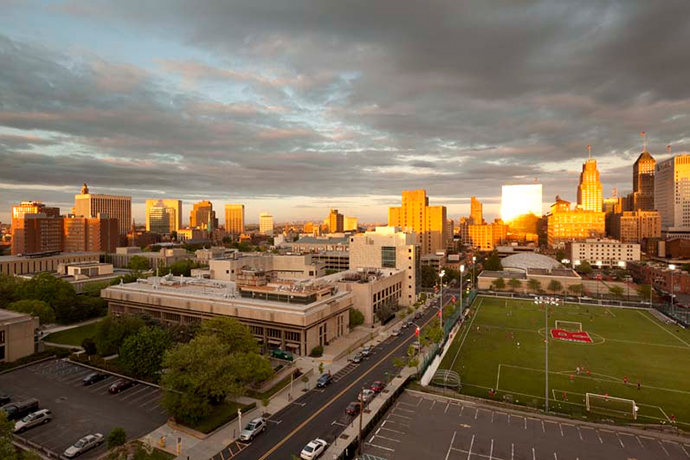 A rooftop view of the campus at Rutgers-Newark in University Heights. The school is one of four area higher education institutions partnering on University Heights Science Park.
Photo by Theo Anderson courtesy of Rutgers University, Newark.
By ADAM BRUNS
I 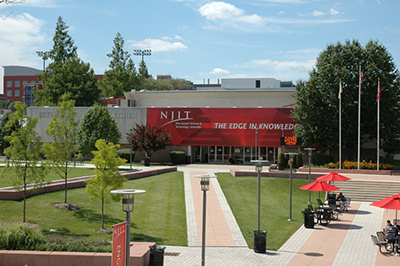 New Jersey Institute of Technology is one of several partners in University Heights Science Park in Newark. The school, which is making moves to house hundreds more students on campus, saw more than $100 million in research expenditures in FY2011.
Photo courtesy of NJIT

f you're a French contract research organization looking to grow in North America, then Montreal and Newark appear to be prime places to splash down.

Last week Biotrial S.A., founded in 1989 in Rennes, France, and with other locations in Paris and London, announced the conclusion of its recent acquisition of Warnex Bioanalytical Services in Laval, Quebec, bringing into its fold more than 70 staff, more than 250 validated assays and 25,000 sq. ft. (2,323 sq. m.) of labs and work stations in the Montreal suburb.

"We have been looking for many years to find the right partner to complement our offer with sample analysis so that our customers could benefit from a full package in their process of developing new drugs or generics," said Jean-Marc Gandon, Pharm.D., founder, president and CEO of Biotrial. "Because of its ability to meet the growing needs of the pharmaceutical industry and to use the latest technology Warnex became an obvious choice. Biotrial is committed to continue providing the excellent service and quality of science for which the Montreal site is known, by continuing its investment in the latest state-of-the-art equipment."

"To expand in North America, we needed proximity to superior research and medical facilities and to a major transportation center," said Gandon. "We looked at many locations around the world before deciding that Newark and University Heights Science Park best meet the many key requirements and standards we have for conducting our research."

Architecture firm Francis Cauffman has completed the master design plan for the facility and expects to break ground in the spring of 2013. Biotrial is anticipating occupying the building early in 2014.

According to a release from the New Jersey Institute of Technology, Biotrial's arrival in Newark "marks another significant step in the continuing evolution of a mixed-use technology park in the Science Park section of Newark's Central Ward, a strategy to drive economic development for the continued revitalization of the area."

UHSP is a collaborative venture supported by the adjacent education institutions — the University of Medicine and Dentistry of New Jersey (UMDNJ), Rutgers-Newark, NJIT and Essex County College — city, state and federal government, private industry and community groups. Thus far, a total of 351,000 sq. ft. (32,608 sq. m.) of office, research and technology space; a daycare center; and 21 units of owner-occupied housing have been developed within Science Park, and more than 90 incubating companies are located there. The UHSP initiative also developed nearby Science Park High School in partnership with the Newark Public Schools district.

Biotrial manages more than 80 drug trials and studies annually, many within its own facilities that employ more than 250 people across the Atlantic. Its 5,000-sq.-m. (53,821-sq.-ft.) corporate headquarters at Rennes Atalante Science Park employs 200 at a site near the university hospital affiliated with Université Rennes, including a Phase I unit with intensive care monitoring equipment and laboratories for non-clinical in vivo studies. The company's Stell Clinic in Paris comprises 1,000 sq. m. (10,764 sq. ft.) including a Phase I unit on hospital property, and its Biotrial International Ltd. Outpost in London manages international contracts and multinational Phase II-IV studies.

It is anticipated that the Biotrial project in Newark will create 150-200 construction jobs initially and eventually more than 100 permanent healthcare jobs to support the permanent operation. The Science Park leadership praised New Jersey Lt. Governor Kim Guadagno for her assistance in attracting Biotrial to the Park.

"We anticipate Biotrial's new headquarters here will spark a series of collaborations with the pharmaceutical and biotech industries to advance learning, discovery and innovation," said Denise V. Rodgers, MD, interim president of the University of Medicine and Dentistry of New Jersey and vice chair of the Science Park Board of Trustees. "Further, this will focus more attention on Newark, the State and the region as a research center, attracting the best in the biomedical and health sciences and advancing leading edge interventions to improve health outcomes locally and around the world."

"This is a significant milestone for Science Park," said Joel Bloom, president of NJIT and chairman of the Science Park Board of Trustees. "Achieving this commitment from Biotrial continues the momentum for developing a world-class science and technology center in Newark."

NJIT's research expenditures totaled more than $100 million in FY2011. As of August 20, 2012, NJIT had 114 non-provisional patent applications pending, of which 56 are funded by third parties, and 25 provisional patent applications pending. In addition, NJIT has 154 unexpired U.S. patents of which 53 are unlicensed. The remaining 101 are either licensed (84, optioned six) or jointly owned (11 with third parties).

NJIT, which is also making a move to house hundreds more students on campus, is home to the Enterprise Development Centers (EDC), New Jersey's largest high-technology business incubator, and one of the largest in the nation. Ninety companies housed at the EDC employ 800 people. It has attracted more than $67 million in third-party funding and has revenues of $82 million.

Recent New Jersey life sciences news was not limited to Newark. Earlier this month, the New Jersey Economic Development Authority (EDA) announced that it will launch a Life Sciences/Healthcare IT Accelerator at its North Brunswick-based Commercialization Center for Innovative Technologies (CCIT), and secure a private partner to manage the effort. The state's first technology accelerator, TechLaunch, was created by EDA in 2012 with industry pioneer Mario Casabona.

The EDA expected to issue a Request for Proposals in late February via a competitive solicitation that will score and rank the respondents who would like to manage the Accelerator. (Following its issuance, the solicitation will be available at www.njeda.com.) The ranking criteria will include: a demonstration of matching funds and readiness to proceed; strength of historical investment track record; strength of historical role in mentoring entrepreneurial companies; and, experience in the New Jersey life sciences market. Respondents will be required to detail their specific model and approach, along with the justification of why the proposed model will be successful in New Jersey.

Consistent with TechLaunch, the new Accelerator would have the EDA's contribution of equity as "matching dollars," with a ratio of 2:1, thus leveraging private capital and commitment. Under this initiative, EDA would contribute $500,000 of capital, plus an estimated $35,000 of in-kind real estate contribution per year over three years. The cash contribution will require the formal 2:1 private sector match, for an annual public private investment of $1.5 million. The EDA's funding will be in exchange for a $535,000 annual prorata Limited Partnership investment, with a subordinate equity return position.

"Governor Christie recognizes how important it is to nurture the growth of New Jersey's early-stage life sciences and technology companies, and this is another opportunity for the state to partner with the private sector to fill a market need," said EDA Chief Executive Officer Michele Brown. "The Life Sciences/Healthcare IT Accelerator will allow us to capitalize on the talent in our region and provide an environment that catalyzes innovation, entrepreneurship and job creation." 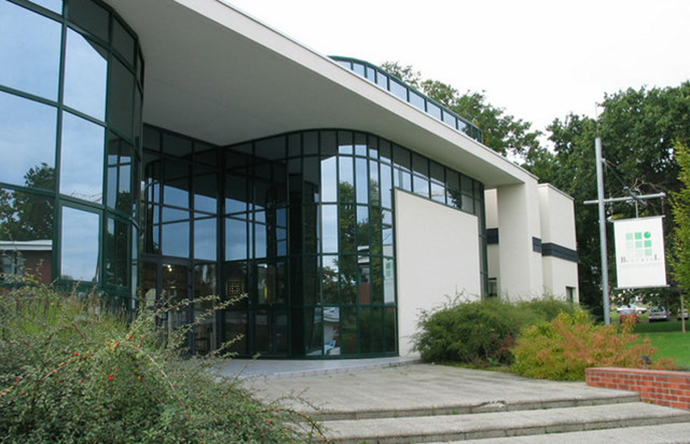 Biotrial maintains its corporate headquarters and central operation at this site in Rennes Atalante Science Park in Brittany, France. The park is growing fast, including a new chemical engineering center scheduled for completion by early 2014 that will accommodate more than 500 people; a new nanotechnology center; and, in November, the opening of a new 550-person technology campus by Technicolor Corp. The 307 companies affiliated with the science park created a net 735 new jobs in 2012 and 761 jobs in 2011.
Photo courtesy of Rennes Atalante