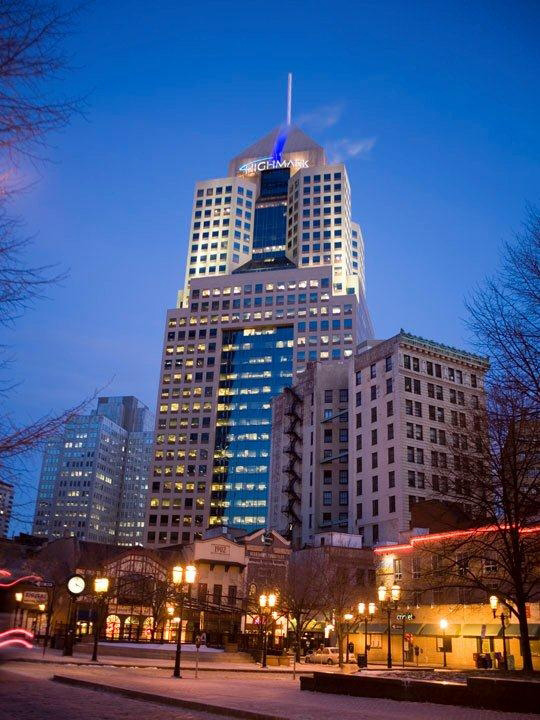 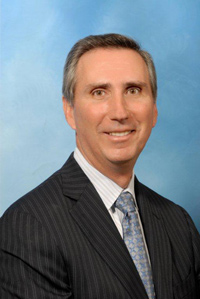 Alex Sciulli, Highmark’s chief real estate officer and a civil engineer-turned real estate executive, has been named the 2013 William Metcalf Award winner by the Engineers’ Society of Western Pennsylvania. Since 1963, the prestigious Metcalf award has been presented annually to an outstanding engineer whose accomplishments relate strongly to engineering fields important in Western Pennsylvania, including construction.

A civil engineer-turned real estate executive, Sciulli has influenced the design and construction of many important Pittsburgh landmarks during his 35-year career.

“Alex has worked in government and in the private sector to help transform Pittsburgh into the world-class city it is today,” said ESWP President Tom Donatelli. “He has served the Engineers’ Society as president and has tirelessly emphasized to young people the importance of engineers to keeping our community and our country strong and competitive in the global marketplace.”

Among the most recent projects in which Sciulli is involved is Highmark’s medical mall in Wexford, Pa. Other projects to which he has contributed during his career include the light rail transit line connecting the southern suburbs to downtown Pittsburgh, the expansion and naturalization of the Pittsburgh Zoo in Pittsburgh’s Highland Park, the renovation of Grant Street and the reconstruction of the Bloomfield Bridge, which serves as a gateway to West Penn Allegheny Hospital and the Children’s Hospital of Pittsburgh.

“We appreciate the Engineers’ Society for recognizing Alex, who is serving Highmark in a key role,” said Dr. William Winkenwerder, Highmark’s CEO. “Alex is helping Highmark forge the way to a new integrated delivery system that will bring many benefits to community members, including delivering health care more efficiently and cost effectively in our communities, close to home.”

Past recipients of the Metcalf Award include former CEOs of Westinghouse, US Steel and American Bridge Corporation.

“I am extremely honored and humbled by this selection and thrilled to join such an elite group of past recipients,” said Sciulli.

In his current position at Highmark, Alex is responsible for overseeing the development, design and construction of the company’s owned and leased facilities, including corporate real estate, affiliated hospitals and medical malls. He is also responsible for site location, building and land acquisition, disposition of properties and leasing commercial and retail space. In addition, Sciulli’s responsibilities include the management of Highmark’s facilities, engineering, consulting and strategic planning activities for the corporate real estate portfolio and its business operations, budgeting and program management. He manages and executes an overall real estate strategy for business and corporate stakeholders, aligning the needs of the divisions and subsidiary companies with each other and with the company’s overall asset management.

Sciulli joined Highmark in February 2012 after three years as president and COO of RJ Lee Group of Monroeville, Pa., a scientific consulting company with four locations and 300 employees. Prior to that, he was an executive vice president and director of corporate real estate services for National City Corporation in Cleveland. He also served as senior vice president and director of corporate operations and real estate at Mellon Financial Corp. in Pittsburgh for six years, where he managed $850 million in assets and was a member of the senior management committee. He served as director of the department of engineering and construction for the City of Pittsburgh, where he was responsible for the city’s infrastructure, real estate and recreational facilities. And he was the city’s water director when two major oil spills occurred in the Mon and Allegheny rivers, leading teams of city workers and contractors to find solutions.

In other words, it’s safe to say he knows all sides of a project. It’s also safe to say he doesn’t have many peers in corporate real estate when it comes to his resume.

“Most of my peers are not engineers,” he confirms in an interview, noting that others in similar positions often come from facilities management, or the transaction or lease management sides of the business. He says he’s been able to blend his background and an MBA to facilitate the design and construction of facilities, all the while understanding what the balance sheet and budget process was all about. “You put this all together,” he says, “and you understand what constitutes a successful project.”

Not that he ever saw himself with a future in corporate real estate.

“When you’re a kid you want to be a doctor or fireman, but nobody really thinks about getting into corporate real estate,” he says. “My change into corporate real estate was serendipitous, frankly. I was on my way to being probably the chief executive of a large architecture, engineering and environmental company. And this opportunity came along to manage corporate real estate for the Bank of New York Mellon. What they were trying to do at the time was build a regional headquarters in New York and in San Francisco, and four buildings in the Pittsburgh campus, but also trying to build a regional headquarters in London, and a facility in Pune, India. Those projects really got me excited. It was something I enjoy, and I’d be helping Mellon forge ahead and grow.”

In the Middle of a Transformation

He’s helping Highmark do the same today, from an already substantial starting point.

Highmark Inc. is a national diversified health and wellness company based in Pittsburgh that serves 34.4 million people across the United States through its businesses in health insurance, dental insurance, vision care, information technology and integrated health care delivery. The company, which has more than 20,000 employees, is the ninth-largest overall U.S. health insurer and the fourth-largest Blue Cross and Blue Shield-affiliated company. Highmark operates health insurance plans in Pennsylvania, Delaware and West Virginia that serve 4.9 million members. The company also offers health and wellness products to clients with employees throughout the country and is a recognized leader in reinsurance. In addition, the company operates more than 600 optical retail stores and four U.S.-based eyewear manufacturing facilities.

Over the past 18 months, the company has been transforming itself from a healthcare insurance company to one that will comprise healthcare delivery. A 3.5-million-sq.-ft. (325,150-sq.-m.) portfolio of mostly office space will suddenly venture into hospital systems, IT facilities, ambulatory service centers, pharmacies and physician offices, among other categories. Highmark is pursuing a hospital affiliation with the West Penn Allegheny Health System in Pittsburgh, awaiting regulatory approval of affiliation with St. Vincent Health System in Erie, and is in the final stage of affiliating with Jefferson Regional Medical Center in Pittsburgh.

“It will grow dramatically in the coming months,” says Sciulli of the Highmark portfolio. “The team I have was built around the health insurance industry, not the provider strategy. We’re embarking with HR and others on a whole organizational design and development [plan]. What does this organization need to be to stay in step with Highmark? This is a new endeavor not only in corporate real estate — everyone at Highmark has to change the way they perform their work.”

Sciulli says he’s frequently on the phone with peers at such companies as Kaiser Permanente, Sutter Health and Cleveland Clinic, benchmarking that they’ve done.

“Kaiser, for example, did the same thing Highmark is doing,” he says. “They moved into the provider strategy. Now they manage some 47 hospitals.”

Sciulli says the medical mall in Wexford, due to be finished in summer 2014, will truly pave the way to “a new integrated delivery system that will transform delivery of healthcare in Western Pennsylvania.” The area north of Pittsburgh is one of the fastest-growing in the country, and recently saw the location of the Westinghouse corporate headquarters in Cranberry Township, just a few miles from where the Highmark facility will go.

“We wanted to have one of our flagship stations in the north where there is a lot of growth and opportunity, to demonstrate this new delivery of healthcare we want to put in place,” says Sciulli. “We looked all around the Western Pennsylvania region, but clearly there was interest in the north because of the huge population growth.”

The company’s proposal to acquire West Penn Allegheny Health System is undergoing review by the Pennsylvania Insurance Dept., which asked for more information from Highmark last week, just nine weeks before Highmark’s affiliation with WPAHS expire, and on the very same day that the University of Pittsburgh Medical Center issued an analysis critical of the risks and the projected costs of the Highmark-WPAHS deal.

“The reason for UPMC’s actions is clear,” said Highmark in a statement this week. “UPMC views a Highmark-WPAHS affiliation as a threat to its monopolistic power in the western Pennsylvania health care market and to its ability to maintain pricing at levels that are detrimental to affordable health care for people in the region.”

A model for some resolution of that rivalry could be found at the Engineers’ Society’s gathering last week, where UPMC was a table sponsor and where UPMC staff from the facilities, engineering, design and construction professions were among the 850 attendees.

“My counterparts at UPMC are personal friends,” says Sciulli. “We live in a community — in Pittsburgh, there’s only one degree of separation. I helped one of my counterparts get established as a board member at the Engineers’ Society. We all want the best for our region, and the best possible healthcare scenario for Western Pennsylvanians.”

After all, their Society forebears wanted the same thing.

“The Society was formed of leading thinkers, economic drivers and entrepreneurs,” says Sciulli. “The Society and its founders have a huge place in the formation of Pittsburgh. Fast forward 133 years, and most people say the big drivers in Pittsburgh are eds and meds” — educational institutions such as Carnegie Mellon and the University of Pittsburgh, and the healthcare, life sciences and medical device community. Highmark’s billion-dollar-plus plan to transform healthcare delivery is just the 21st century’s answer to the advent of electrical transformers and other engineering innovations in the area in the 19th century.

“It’s come full circle,” says Sciulli. “It’s coincidental that I get to step into the same footsteps of William Metcalf, but also get to be involved in driving economic development in Western Pennsylvania.”

Highmark in December announced the construction of a 174,000-sq.-ft. (16,165-sq.-m.) medical mall in Wexford, Pa., north of Pittsburgh. “Today's announcement is an important milestone in our efforts to transform the delivery of health care in Western Pennsylvania,” said William Winkenwerder, M.D., Highmark's president and CEO. “With a focus on a better patient experience, the medical mall will merge traditional medical services with prevention.”