Window on the Waves

City Dock No. 1 at the Port of Los Angeles could become a global center for marine research. 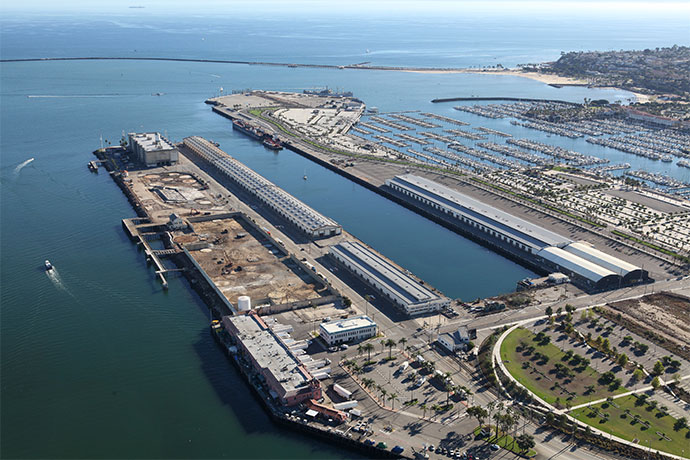 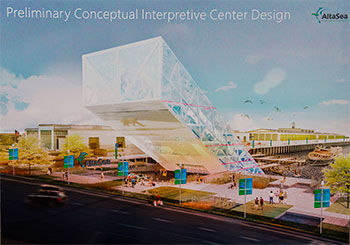 This early conceptual rendering depicts one possible vision of AltaSea's interpretive center, which the organization hopes to site at the end of the nearest inlet pictured above, cater-cornered from the massive warehouses.
Image courtesy of AltaSea

or a surfer, the green room is the best place to be. It's when you're inside the barrel of a wave, and the water gives the light a greenish, otherworldly glow. "A great place to be," says one surfing glossary.

A new venture on historic property at the Port of Los Angeles aspires to be a great place for studying waves and other marine phenomena.

Actually, it's still working out the final lease terms for a visionary project called AltaSea announced by Los Angeles Mayor Antonio Villaraigosa, port officials, philanthropic leaders, marine scientists, students and community members in mid-June. Designed to transform City Dock No. 1 into an urban marine research and innovation center, AltaSea will be developed through a public-private partnership between the Port, a non-profit organization, and a host of regional public and private universities.

Funding commitments for Phase 1 of the project already tally $57 million, including $32 million in site-related capital investments by the Port of Los Angeles and a $25 million gift by the Annenberg Foundation to get the project underway. Phase 1 is currently estimated to cost $155 million with a 2018 completion goal.

The facility will feature circulating sea-water labs, offices, classrooms, lecture halls, support facilities, an interpretive center, and an opportunity to develop the world's largest seawater wave tank for studying tsunamis and rogue waves. The anchor tenant of Phase 1 will be the Southern California Marine Institute (SCMI), a strategic alliance of 11 major universities in southern California that have marine science academic and research programs. The entire project cost is estimated at more than $500 million with completion over a 15- to 20-year timeframe.

"AltaSea will position the City of Los Angeles as the premier location for addressing ocean-related environmental issues that are not only important to Southern California, but to the world," said Mayor Villaraigosa. "This public-private partnership will create jobs, draw new industries to the City, provide tremendous educational opportunities, and enhance the overall quality of life in Los Angeles."

"Our oceans and waterways are among our most precious natural resources," said Wallis Annenberg. "The Annenberg Foundation is pleased to provide initial funding for the innovative AltaSea marine research campus which will develop global solutions that will benefit generations to come. We champion collaborative projects such as AltaSea and eagerly anticipate the impact this private-public partnership will have."

"At the edge of the largest urban area in the western U.S., the AltaSea research campus is part of a grander vision for the Port of Los Angeles," said Port Executive Director Geraldine Knatz, Ph.D. "We will continue our growth and expansion as America's leading trade gateway and at the same time facilitate some of the most innovative and collaborative marine research and solutions possible."

"From its Latin root, Alta means high, deep, noble and profound," said Dr. Daniel Pondella, director of the Southern California Marine Institute and chair of biology at Occidental College. "Our goal is to forge deep and profound partnerships on every level and engage the entire Los Angeles community — from government agencies to university researchers, to science educators and industry leaders — in marine research that will transform the future."

AltaSea says research will focus on studying the most critical problems facing urban oceans today, such as climate change due to rising sea levels, food supply and freak weather patterns. SCMI expects to study other pressing local problems at the center as well, such as harmful algal blooms, restoration of the damaged reefs of the Palos Verdes Peninsula and San Pedro Bay, and the restoration of San Pedro Bay fisheries.

Planning and design for wharf improvements has already begun. Permitting and design will take two years, with construction scheduled to begin on the wharf in summer 2015. AltaSea aims to complete phase one within five years. The entire campus is projected to be completed in 15-20 years.

Of course, the port itself already does a pretty nifty job of generating economic development and jobs. Still the leading seaport in North America in terms of shipping container volume and cargo value, the port generates more than 830,000 regional jobs and $35 billion in annual wages and tax revenues.

Phillip Sanfield, spokesman for the Port of Los Angeles, says the port's participation in AltaSea is part of a bigger vision to rebuild the community bonds where people work and live, not just through blue-collar jobs but through tourism, travel and other job centers that help the area diversify its employment base.

"At one point back n our history the port had a lot more people coming down here to work every day," he explains, engaged in fishing, canning and shipbuilding, among other industries. Even though the port is still the busiest US seaport, and there are 15,000 people working at the port every day, things have changed since 50 years ago, "when there were 80,000 or 100,000 people down here," says Sanfield.

The long warehouses scheduled for makeovers were originally used for cotton storage, and contain what Sanfield can only describe as "an amazing amount of space." He says it's a great example of productive reuse of buildings that haven't seen use in several decades.

Adjacent to those warehouses is space where there used to be oil storage tanks, as well as a parcel nearby that will host the planned interpretive center. Sanfield says the hope is to place the wave tank on the site where the oil tanks once were, once environmental mitigation is completed. But for now, the port's portion of AltaSea's first-phase budget is devoted to structural safety of the buildings on site.

Kellie Stockdale Webb, spokesperson for AltaSea, says the organization is seeing enthusiastic early interest from both the philanthropic sector and the business sector. She says the vision is to have AltaSea consist of one-third research, one-third education and one-third business incubation, with all parties required to abide by the tidelands trust principles established by state law. She says AltaSea has so far fielded interest from companies in such sectors as energy and robotics — enough interest, in fact, to already stoke some revision.

"Because the business incubation initially was slated for phase two," she says, "we're working with the port on a way to use the facility as is until we start the renovation for phase two. There are a number of companies interested in historic warehouse space that has dockside deepwater access." A number of government agencies are interested too.

She says AltaSea will likely issue an RFP for running the incubator very soon. In the meantime, AltaSea is working with business incubator organizations such as PortTechLA to identify potentially interested companies.

An advisory cabinet created earlier this year is providing guidance as lease terms are being negotiated, a president/CEO recruitment is under way, and the creation of the AltaSea non-profit 501(c)(3) and its board of directors are formalized in the coming months. AltaSea is currently a project of the Rockefeller Philanthropy Advisors. 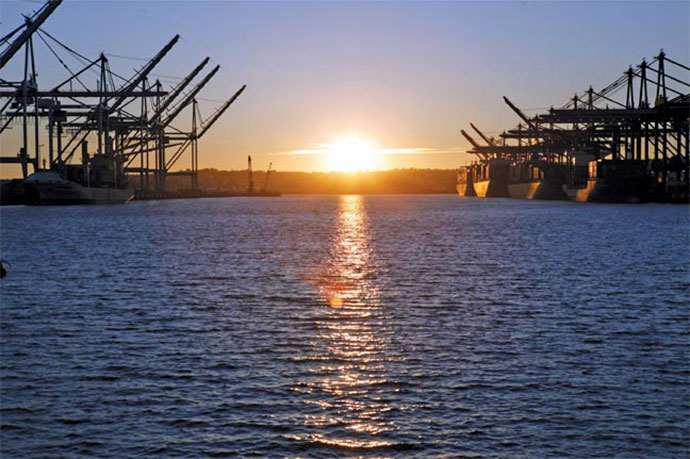 AltaSea could add diversity to the port area's employment base, which as the leading US seaport in cargo value and container volume welcomes 15,000 people a day on site.
Photo courtesy of Port of Los Angeles