A public-private partnership moves forward in southeast Minnesota, thanks to a team effort that emulates the approach of the region's most prized institution. 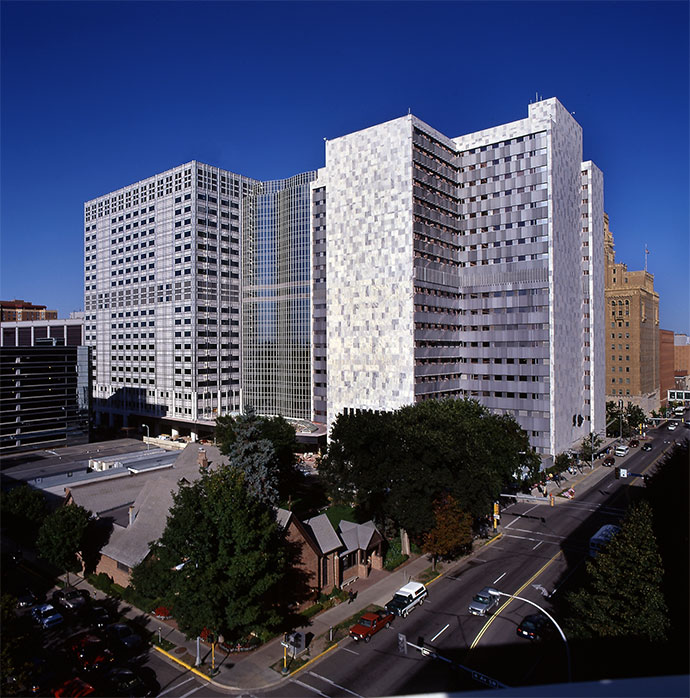 The Mayo and Gonda buildings dominate downtown Rochester in more ways than one.
Photos courtesy of Mayo Clinic
by ADAM BRUNS 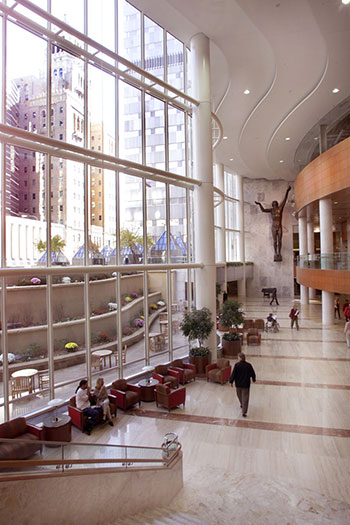 The Landow atrium in the Gonda building. The 20-story building, opened in 2001, is linked with the Mayo Building and the Charlton Building of Rochester Methodist Hospital, forming the largest interconnected medical facility of its kind in the world, with more than 3.5 million sq. ft. (325,150 sq. m.).
"Right now there is an eight-year waiting list for parking spots at Mayo Clinic."

Talk to enough corporate real estate and facility executives around the world and you'll be astonished at how often big projects and decisions hinge on the unglamorous subject of parking.

Communities are no different. And the above sentence from the documentation behind the Destination Medical Center (DMC) measure in Minnesota sums up the primary impetus behind its passage in late May by the state's legislature.

Part of the state budget, it will help fund the public infrastructure required to keep pace with an estimated $5 billion in private investment by Mayo Clinic and other private entities over the next 20 years aimed at securing Rochester's and Minnesota's position as a global medical destination. In other words, Rochester, now is the time for a reimagining, and a reawakening to your potential.

"This is an historic moment for Mayo Clinic, the city, county and for the entire state of Minnesota," said John Noseworthy, M.D., Mayo Clinic president and CEO. "We offer our sincere thanks and gratitude to the leaders at the local, regional and state level who came together to help make this bold, once-in-a-generation economic development opportunity a reality for our state. In particular, I would like to thank the legislative chief authors, Rep. Kim Norton and Sen. David Senjem, for their leadership role in this successful effort. We look forward to working with the community to secure Mayo Clinic's global position here in Minnesota for decades to come."

Once a stagecoach stop and long a center of agriculture, Rochester's medical care reputation has been climbing skyward ever since Dr. William W. Mayo arrived in 1863 to serve as an examining surgeon for Civil War draftees.

Today Mayo Clinic, the world's first and largest integrated medical practice, is visited by some 2 million people from around the world annually, and half of its 33,000 employees work in various facilities downtown, where more than one-third of Rochester area total employment is located. Statewide Mayo employs more than 40,000 people.

Mayo isn't the only major Rochester employer. IBM employs approximately 4,000 people at one of its largest development centers just north of downtown. Since 1956 it's grown from 156 people occupying 50,000 sq. ft. (4,645 sq. m.) Today, IBM occupies about 3.6 million sq. ft. (334,440 sq. m.) of owned and leased space in Rochester (equivalent to about 78 football fields). It remains the largest IBM facility in the world under one contiguous roof.

Back downtown, the recently established University of Minnesota Rochester has its fledgling campus, where on May 18 the school graduated its first class of undergraduate students in the B.S. in Health Sciences and B.S. in Health Professions programs.

Yes, healthcare is on the minds of state leaders everywhere. But in certain medical-care capitals it's envisioned as more of a boon than a burden, especially as globally recognized centers such as Mayo and Cleveland Clinic stretch their institutional wings nationally and abroad. Mayo continues to stand out among them because of its team approach to medical care, a pooling of resources practiced by all 55,000 of its doctors, nurses and allied health professionals at sites in Minnesota, Florida and Arizona.

"Throughout this process, we have had the chance to meet with and talk to leaders from across the state and help them understand more fully the critical role southeast Minnesota plays in our state's economy," said Jim Bier, Olmsted County commissioner, upon passage of the DMC measure. "It is gratifying to see state leaders recognize southeast Minnesota for the economic engine that it is, and I thank them for their role in advancing this initiative that will provide significant job growth and tax revenue at both the local and state level. We are proud of our state's position as a global leader in health, healing and biosciences and excited about the opportunities DMC offers to further elevate that position in years to come."

The state's $455 million investment in the project over the next two decades is projected to leverage an estimated $5.6 billion in local and private investment.

"This initiative will secure Minnesota's position as one of the world's premiere destinations to receive medical treatment; it will create tens of thousands of good-paying jobs for Minnesotans and make Rochester an even better place to live, work, and raise a family," said Governor Mark Dayton. "Those who said that state government should play no role in a project like this are just flat out wrong. This project demonstrates the value state government can bring to the table. By partnering with the private sector, we can accomplish great things together for the people of Minnesota." 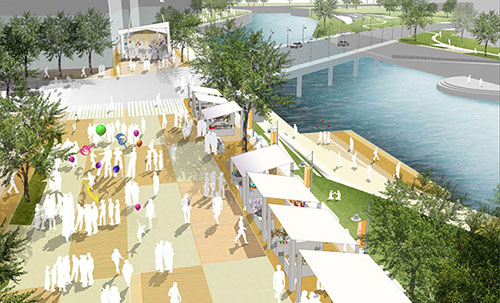 The Rochester master plan aims for the pedestrian-friendly, creative-class liveability vibe that so many downtowns seek today.

Mayo has a $9.6-billion annual economic impact to the State of Minnesota – roughly 4 percent of the state's total GDP. Each year, Mayo Clinic contributes approximately $1.5 billion in tax revenue to state and local governments.

State funding for DMC will be supplemented by an additional $3.5 billion from Mayo Clinic, $128 million from the City of Rochester and Olmsted County, and an estimated $2 billion from private investors. The initiative will also generate an estimated $3.2 billion in state tax revenue over the next 20 years. In total, the project will leverage an estimated 22-to-1 return on the state's investment.

"The need for world class medical care and treatment will only grow in the next 20 years," said state Rep. Kim Norton, author of the bill in the House. "Mayo Clinic's expansion will attract other private investors and bring growing numbers of patients and employees to Rochester. This DMC investment will assure the city has the infrastructure and capacity to grow in exciting new ways."

"We can now say that Rochester will be the home of the greatest medical center on the face of the earth for years to come," said state Sen. David Senjem, who authored the bill in the Senate.

State funding for the DMC initiative will be used to fund projects for public infrastructure, including the acquisition of property, demolition or repair of buildings, land remediation and site improvement. State funds will also be used for the construction of buildings, parks, roads, transit facilities, parking facilities, and other cultural and recreational amenities. That's crucial, because the city has not been able to keep up with the demand. In addition to the parking statistic cited above, current projections show hospitality businesses in Rochester will need 1,100 more hotel rooms in the coming years just to serve the families, friends, and guests of Mayo Clinic patients.

The Builders Association of the Twin Cities estimates the DMC plan will create 2,000 construction jobs a year over the next two decades.

The DMC initiative will be subject to a high standard of transparency and oversight. Use of state, local, and private funds contributed to the initiative will be overseen by an eight-member board. The board will be responsible for the operation of the Destination Medical Center Corporation (DMCC), which will abide by open meeting laws and be governed according to the state's data practices laws. Each year, the City of Rochester and the DMCC will submit a report to the legislature detailing their finances and activities.

Much of the activity will adhere to the vision established by the Rochester Downtown Master Plan put forward by city, county, Mayo and university leaders with the help of Progressive Urban Management Associates AECOM and others in 2010. According to a 2010 market profile prepared by the master plan team:

No state funding will be invested in the project until $200 million has been secured by Mayo Clinic and private investors. Some of the expected private investment is already materializing.

On May 31, Titan Development and Investments announced plans to develop a 25-story downtown facility that will include high-end grocery retail, a well-known Minnesota steak house, a four-star hotel, Class A office space, an upscale urban apartment community, and other upscale retail shops. Titan is "committed to implementing projects that support and enhance the vision and direction of the community as part of the DMC 20 year plan," said John Beltz, vice president of brand management and revenue development for the company.

Mayo itself wasn't waiting around for permission. It's already building a new hospital in Cannon Falls, Minn., and on May 28 it announced an expansion to its sports medicine practice to meet the growing regional, national and international demand for its expertise. The expansion is part of the 100,000-sq.-ft. (9,290-sq.-m.) Mayo Clinic Dan Abraham Healthy Living Center building project, and is scheduled to open in spring of 2014.

Further private investment in Rochester and elsewhere will undoubtedly be helped along by other legislation passed this year, including the exemption of capital equipment purchases from sales tax. Under the previous law, when businesses invested in new capital equipment, they paid the sales tax and then filled out paperwork to receive a refund later. Starting in 2016, businesses will receive an upfront sales tax exemption on these purchases. 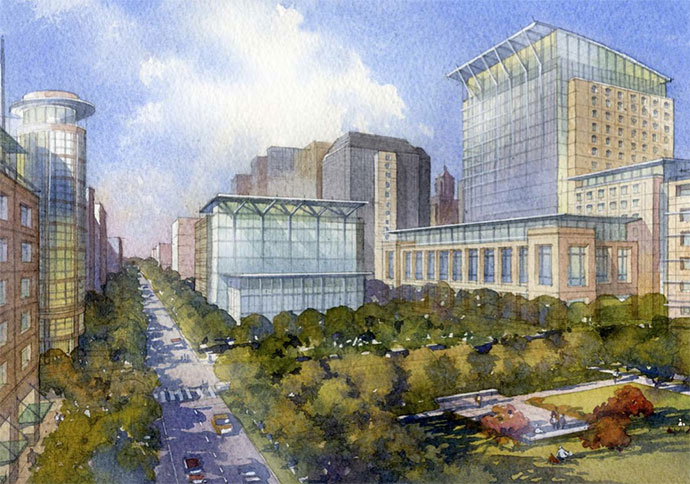 Part of the plan for downtown Rochester calls for a green boulevard through a research and educational district.
Renderings courtesy of City of Rochester