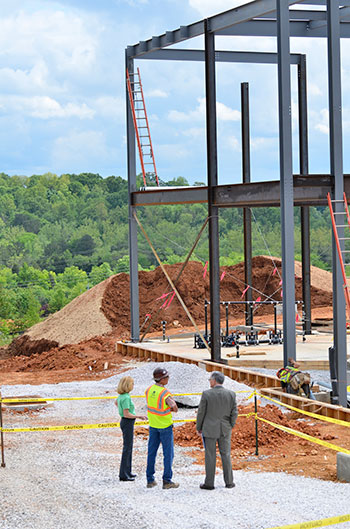 Steel rose last year for the Provision Center for Proton Therapy in Knoxville, which when complete in 2014 will be one of just a handful of such centers in the United States.
Photos courtesy of Blount Partnership

Led by science, East Tennessee finds more than one nucleus can power a region’s economy. 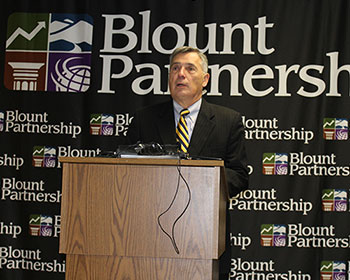 ne year after Alcoa announced the permanent closure of a smelter in the ultimate company town, Alcoa, Tenn., is on the rise, thanks to a slew of companies finding what they need in the region that now likes to call itself "Innovation Valley."

On Feb. 21, proton therapy firm ProNova Solutions announced a $52-million investment in a two-building complex that will house its corporate headquarters along with a research and commercialization laboratory. The project will be situated on 26 acres and make ProNova the anchor tenant at Pellissippi Place technology research and development park on the Oak Ridge Corridor, located at the end of Pellissippi Parkway in Alcoa. The complex will be home to as many as 525 new jobs. A University of Tennessee study projects that, should the project achieve the scale envisioned, it could lead to as many as 5,000 jobs in the region.

ProNova's is one of two proton therapy projects landing at the same time in the region known for Oak Ridge National Laboratory (ORNL), famous for its nuclear energy work. The Provision Center for Proton Therapy is developing a $119-million, 90,000-sq.-ft. (8,361-sq.-m.) proton therapy cancer center that is taking shape at Dowell Springs Business Park off Middlebrook Pike in Knoxville. When complete in early 2014, it will bring to the region an advanced cancer treatment capability currently available in just a baker's dozen of U.S. cities (see map), where they're operated by a who's who of medical institutions, including M.D. Anderson, Loma Linda Medical Center, Massachusetts General Hospital, and soon, the Mayo Clinic.

"Today is the celebration of a vision becoming real," said Dr. Terry Douglass, chairman and president of Provision Trust and founder of the Provision Health Alliance, last April when the foundation for the Provision center was completed. "When we started on this journey more than two years ago, some thought that bringing the most advanced cancer treatment in the world to Knoxville was an unrealistic goal. I'm glad we didn't listen to them, because now we're on schedule to open in early 2014 and begin changing the lives of cancer patients and their families." 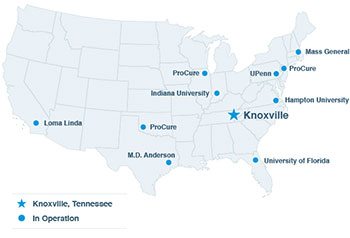 "This is an important milestone for ProNova Solutions that signifies not only the next step in the advancement of proton technology, but it's also an important investment in the Blount County community," said Douglass last month. "With the Provision Center for Proton Therapy located in Knoxville and now the ProNova site in Alcoa, this is truly a regional effort and one we hope will benefit not only the citizens of East Tennessee, but that it will bring the next innovation in cancer treatment to patients and physicians across the globe."

Proton therapy has significant benefits for patients when compared to traditional radiation therapy. It significantly reduces side effects, and patients are generally able to continue their daily activities during their course of treatment. Proton therapy is particularly suited for the treatment of brain, prostate, head and neck, lung and breast cancers. It is also vital for treating pediatric cancers because it significantly reduces damage to healthy, growing organs surrounding many cancers in young children.

Up in a Down Economy

The project is receiving support and assistance from The Blount Partnership, Knox County, Innovation Valley, Tennessee Governor Bill Haslam and the Tennessee Dept of Economic and Community Development (ECD). It's one of nine corporate facility investments to come to the area in the past 18 months, says Bryan Daniels, president of the Blount Partnership.

"We've been very fortunate," he says. "With this down economy, our region has fared fairly well." Neighboring Knox County has seen its share of successes too, he says.

The project momentum coincides with infrastructure momentum, as the Tennessee Dept. of Transportation finishes the final four miles of Pellissippi Parkway that connects that end of the valley to Oak Ridge, and allows ample room for construction of both corporate and residential property. "Pellissippi Place will capitalize on that road being finished," says Daniels.

Daniels says ProNova had evaluated possible locations for approximately one year prior to the announcement.

"With that project, they could go anywhere in the world," he says. "That technology is now being constructed overseas." But this company, like others, is viewing its home country with fresh eyes when it comes to manufacturing potential.

"After their year of due diligence, they kept coming back to the technology park because they liked the proximity to Oak Ridge National Laboratory, where research in this field is being conducted, and where the work force is used to technology like cyclotrons and linear accelerators." Meanwhile, thanks to millions of dollars invested at Pellissippi Place by Knox County, Blount County, Alcoa and Maryville, the tech park infrastructure was ready, and the Provision center is just 20 minutes away for clinical application of the technology.

Daniels says the commercialization lab will be in the park in perpetuity, and the project agreement stipulates that any spin-out technologies or other collaborative facility projects will be developed at the park as well.

"We're willing to partner in a way that helps their business, and in return, we're wanting the region to try to be the center of the universe for proton technology in the medical field," says Daniels. "As this company grows and collaborates, those bricks-and-mortar locations that work with them will all have to have locations within Pellissippi Place."

Such dealmaking crystallizes the research being conducted at ORNL, as well as what Daniels calls the "woven strategic approach" of the Innovation Valley partners, including the University of Tennessee.

"We're making large strides with cooperating with ORNL and the University," says Daniels. "In the past we've seen technologies being licensed and shipped out of our region. Now we're collectively trying to keep the technology local. We want them to stay in our region, because we have the labor force to support those endeavors. 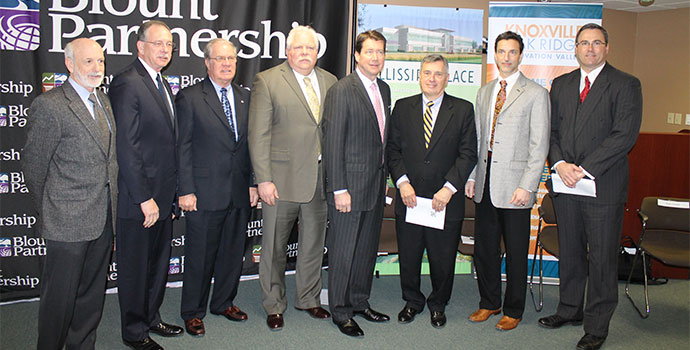 "This collective effort from many different entities really shows how far we've come to realize that an investment like this benefits the area as whole and not just one town, community or county," said Chuck Alexander, chair of Blount Partnership Economic Development Board, at the ProNova announcement. "ProNova's project is more than double the capital investment that Blount County, Knox County, Alcoa [the town], Maryville and the Blount Partnership have made in the park. Thank you to Pronova for sharing in our vision of building a technology community. This now pushes our total to 2,325 jobs that have been created and $167 million in capital investment over the past two and a half years."

One of the recent investors is DENSO, which is making investments across North America, including a 200-job expansion in Maryville. Daniels says negotiations are under way for a separate DENSO expansion in the area.

Ceramaspeed
Announcement: Aug. 22, 2012
Jobs: 40
Investment: $3.5 million
Site: Blount County industrial building in Maryville, Tenn.
Operations: Manufacture of electric radiant heating solutions for glass ceramic appliance market in 55,000-sq.-ft. (5,110-sq.-m.) facility. The investment is a return to the area for the company after it decamped to Mexico during the economic downturn, costing the region 400 jobs.

Daniels thinks the regional government collaboration that's resulted in Pellissippi Place will soon become the norm for the United States.

"We've come a long way, and you're going to see more regions do that," he says. "Companies need a regional labor force. Any company of any size does."

But amazement at their own ability to partner pales in comparison to the astonishment at seeing the technology itself evolve.

"It is truly amazing when you see the technology they're deploying to combat cancer," says Daniels of what he calls the "moving" experience of seeing some of the activity "behind the fence" at ORNL.

As for Alcoa the company, the North Plant continues to recycle aluminum cans into sheet, and received a $24-million investment in 2010. Kinsey Probasco Hayes, the firm behind much of the planning for Chattanooga's successful downtown redevelopment, continues to inch forward with its plans for redeveloping Alcoa's long-closed 300-acre West Plant site.

"They've worked with us hand in hand in looking to redevelop the South Plant site," Daniels says of the smelter location, where the first smelting took place 99 years ago. Some positive news in that regard may be coming soon. But the positive news for redeveloping that plant's work force has already arrived, creating a different sort of recruitment campaign.

"With the downsizing of the aluminum company, you've actually seen many companies rally to our community to hire labor, and we're now having a labor shortage. Many of these companies are regional employers, and they've absorbed much of the labor force. We're now trying to promote outside our region, looking for people to come to our area and work, because we need them." 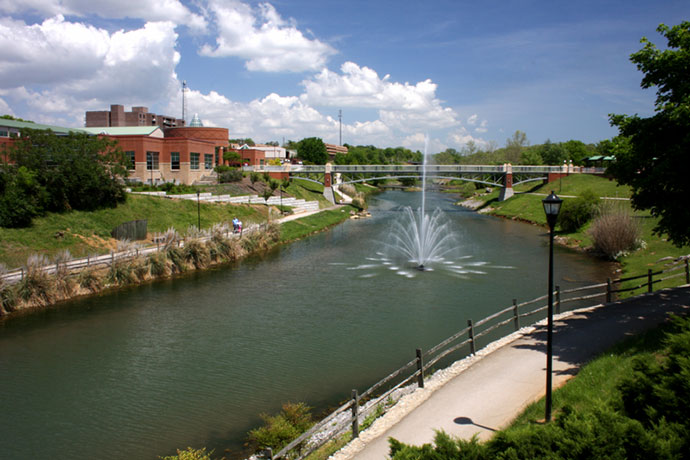 The Maryville-Alcoa Greenway is a nine-mile trail connecting Springbrook Park in Alcoa with several parks in Maryville.