A Life-Changing
Place in the Sun

A new medical science cluster is emerging in Pensacola
as entrepreneurs set up shop in an historic city. 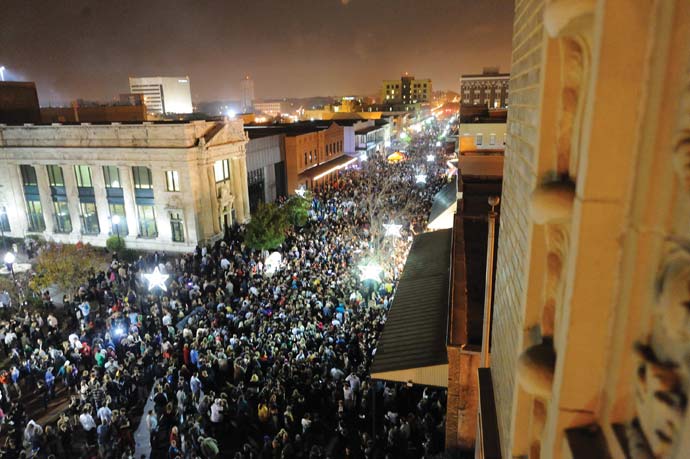 Known for its sunny beaches, Pensacola also features a downtown that lights up at night.
by RON STARNER
I 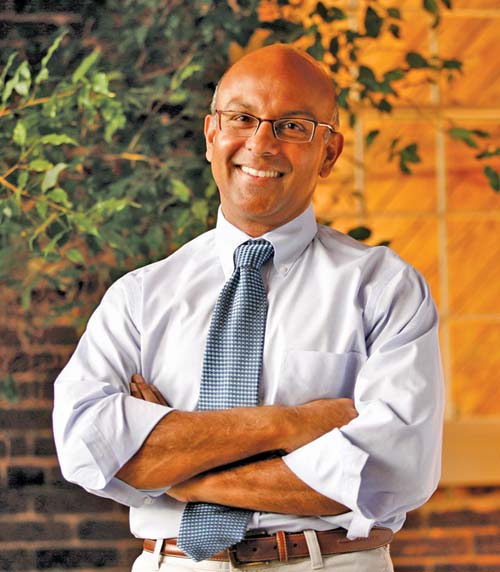 "It is amazing how much young energy you see downtown now," says Dr. Sunil Gupta (below), founder of the Retina Specialty Institute in Pensacola.

n Pensacola, Fla., a research institute that has been nationally recognized for its groundbreaking work is teaching the lame to walk and the blind to see.

It is called the Institute for Human and Machine Cognition (IHMC), and it is part of a rapidly growing medical science cluster in the Greater Pensacola Area of Northwest Florida.

Long known for its Naval Air Station-based Blue Angels, its picturesque white sandy beaches and its 500 years of Spanish-American history, Pensacola today is undergoing an economic shift as old-world industries like logging and paper mills give way to a new wave of entrepreneurs conducting breakthrough R&D in a variety of life-science sectors.

Nowhere is this research more change-focused than inside the halls of the IHMC in downtown Pensacola, where more than 100 scientists and engineers are altering the way the world looks at people with physical and mental disabilities.

"Our product is intellectual property," says Ken Ford, founder and CEO of the IHMC. "We develop technology aimed at enhancing and extending human performance — computational systems and mechanical systems. We are a leader in robotics and exo-skeletons. We either license the I.P. to production-oriented companies or we give the use to the customer.

"The Department of Defense accounts for about half of our business. NASA is a big customer too," he adds. "The other clients are the usual federal R&D entities and large corporations like Lockheed Martin, Boeing, Northrop Grumman and others."

By definition, the employees at IHMC "investigate a broad range of topics related to building technological systems aimed at amplifying and extending human cognitive and perceptual capacities." In layman's terms, IHMC gives new abilities to the disabled through special processes known as "sensory substitution."

"IEDs have blown out the eyes of wounded vets in Iraq and Afghanistan," says Ford. "This has happened to about 2,000 people, but they have intact brains."

IHMC outfits them with a special video camera mounted to their head. It captures video images and then translates those images into a series of impulses that are captured and recorded on the patient's tongue. The patient's brain then converts the pattern on the tongue into a picture in the mind's eye, and just like that, the patient "sees again."

IHMC is also developing an exo-skeleton, sort of like an Iron Man suit, that affixes to a crippled soldier's legs and uses brain waves to enable the patient to walk again. The institute is also working on projects like the next-generation lunar rover for NASA and the Companions Project for Alzheimer's patients.

"As these patients get older, what they need most is a companion that they can relate to," says Ford. "This is an artificial intelligence system that will keep them company, answer their many questions, and constantly engage them in dialogue."

The not-for-profit research institute was spun out of the University of West Florida in 2004 and hired its first employees in 2005. In 2007, IHMC won the U.S. Department of Commerce's Economic Development Award for the whole country in the technology corporation category.

It has since become a leading component of the downtown revitalization effort taking place in the Pensacola CBD. IHMC employees today work in an historic building that was once used as the city's jail and police facility.

"New ideas happen in old buildings," says Ford. "We rent buildings that would otherwise be vacant. We are spread out in three buildings in this neighborhood, but we want to expand more in Pensacola and consolidate onto this campus." 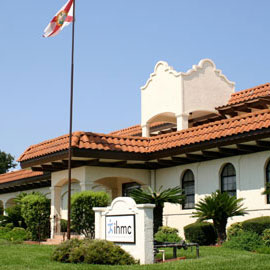 The Institute for Human and Machine Cognition (IHMC) is one of several organizations making Pensacola a "diamond in the rough" in the life sciences industry.

IHMC is already expanding its work force by attracting the brightest minds out of Harvard, MIT and Stanford. "We compete mostly with the big universities for talent," Ford says. "We are looking for the best people out of Austin, Boston and Palo Alto. These are folks who are not looking to leave where they are. Pensacola has to do its part to attract them."

Ford notes that he sells recruits "on how cool IHMC is and the merits of the community." He says that "they are not looking for a perfect place, but a place that is on the right trajectory and where the arrow is pointing up and where their contribution will help that."

IHMC tried renting an office in Seaside, "but it didn't have enough authenticity," says Ford. "It was hard to recruit young people to that place. They did not want to live in a vacation retreat for billionaires. It feels like the Stepford Wives to young people. They want a place that is more like Boston."

Enter Pensacola. "What I like about Pensacola is the authenticity," Ford says. "The people here are looking for a high-quality, human-scale, walkable experience and access to nearby, world-class recreation. For us, this location works."

It also works for Dr. Sunil Gupta, founder of the Retina Specialty Institute in Pensacola. The firm specializes in retina surgery and post-operative care and currently has six doctors. By the summer, it plans to have eight or nine physicians who focus purely on retina care. The last three drugs approved by the FDA for retina care all went through clinical trials at Gupta's center.

"Pensacola is really the regional referral center for specialty health care for the entire region," says Gupta. "We get patients from two to three hours away."

Gupta also chairs the Andrews Institute, run by the world-famous arthroscopic surgeon Dr. James Andrews. "We attracted Dr. Andrews to move his practice from Birmingham, Alabama, to Gulf Breeze, Florida, and to open the Andrews Institute here six years ago," Gupta says. "He has transferred his practice full-time from Birmingham to Pensacola. This is a great place for top-end surgical services. We also attracted the top ocular plastic surgeon in the world about 10 years ago for the same reasons."

Gupta notes that "if you have a great place to live, the patients will come to you. Pensacola has really started to turn the corner. It is amazing how much young energy you see downtown now. Ten years ago, you didn't see that. Now, we have great restaurants, and you don't see that in surrounding mid-sized cities."

'A Diamond in the Rough'

Pensacola is a city of 52,000 people anchoring an MSA of 450,000, and its rapidly growing Pensacola International Airport is a boon for business, adds Gupta.

"We have direct flights to many key markets in Florida and the Southeast and Washington, D.C.," he says. "Patients will fly out at three or four in the afternoon and get here for an evening meeting. We have created an airport that is very good."

Niels Anderson, president and CEO of KAMedData, KontactIntelligence and KiJobGrowth in Pensacola, knows what it takes to attract talent in the medical industry. His company provides strategic consulting in medical staff development, physician practice recruitment and retention, training and industry research.

"I was recruited here by Sacred Heart Health in 1995," he says. "Pensacola was like a diamond in the rough then, and in some ways it is still like that. But you can find people here who have an entrepreneurial spirit. The community leaders share an absolute passion to make this community a very big pin on the world map."

Anderson says that he sees Pensacola "as a very small version of Research Triangle Park. There is a lot of intellectual property here. IHMC is a great example."

Anderson's organization employs 30 people now, but he notes that "we would love to add another 100 or so employees over the next two years locally. We hire most of our employees from Pensacola."

The bottom line, says Anderson, is this: "If you have a business you can do virtually anywhere, why wouldn't you come here?" 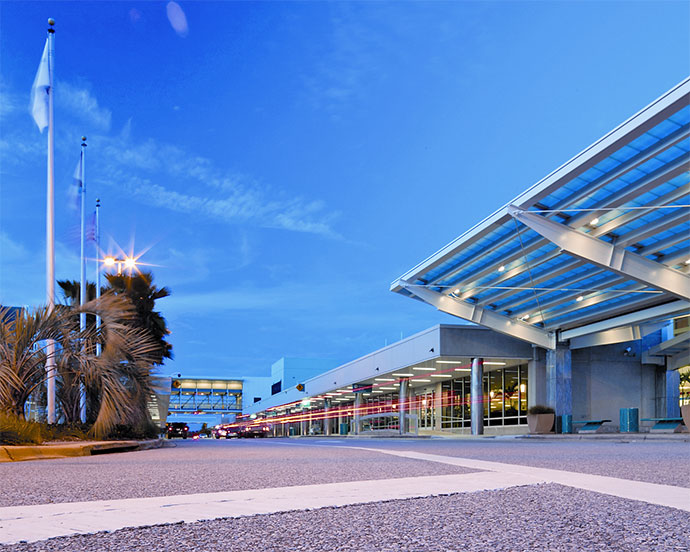 The growing reach of direct flights in and out of Pensacola International Airport is a boon for businesses of all kinds.