Short on Skills or
Short on Focus?

Bayer and Brookings offer perspectives on the STEM work force. 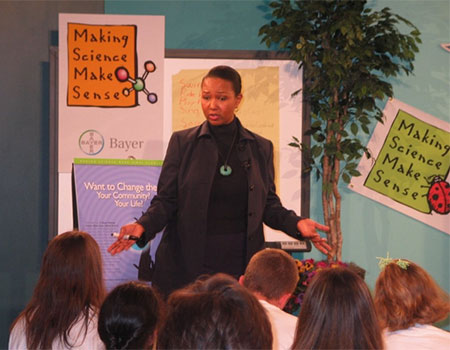 here’s a shortage of degree holders in science, technology, engineering and math (STEM) fields, says one survey. Another says wait a minute, maybe you don’t need that degree.

“More new STEM jobs are being created than new non-STEM jobs today at U.S. Fortune 1000 companies, according to 67 percent of the 150 respondents to the latest Bayer Corp. Facts of Science Education survey, said a company release earlier this month. But only half can find qualified four-year degree holders in a timely manner.

“Companies struggling to fill STEM positions overwhelmingly (at least 90 percent) believe it is due to a shortage of qualified STEM degree candidates with two-year or four-year degrees,” said Bayer. “In addition, unfilled positions are bad for business — talent recruiters from STEM and non-STEM companies alike believe that the unfilled positions cause lower productivity, set limits to business growth, and result in lower revenue.”

“These Fortune 1000 companies represent combined revenues of more than $13 trillion and employ some 31 million people. So their talent recruiters provide a critical perspective for understanding the STEM work force landscape,” said Dr. Mae C. Jemison, astronaut, medical doctor, chemical engineer and Bayer’s longtime “Making Science Make Sense” spokesperson. ”They clearly indicate that STEM competencies are important drivers to business performance and success. And, that STEM literacy will continue to be highly prized by employers, regardless of industry — or job, for that matter — well into the future.”

According to Fortune 1000 talent recruiters surveyed by Bayer:

“Even in the height of the recession, STEM jobs were going unfilled,” said Linda Rosen, CEO of Change the Equation. “The results of this survey emphasize the voice of Corporate America — there is a STEM skills shortage and we need to address it now. We very much believe in using data to inform our efforts around STEM learning, and this important survey gives us one more tool to employ.”

Charts and map below courtesy of Brookings

A new report from Brookings shines the spotlight on STEM careers where a heavy student-loan debt is not a requirement.

Analysis of the occupational requirements for STEM knowledge finds that:

As Brookings explains it, “The second STEM economy draws from high schools, workshops, vocational schools, and community colleges. These workers today are less likely to be directly involved in invention, but they are critical to the implementation of new ideas, and advise researchers on feasibility of design options, cost estimates, and other practical aspects of technological development. Skilled technicians produce, install, and repair the products and production machines patented by professional researchers, allowing firms to reach their markets, reduce product defects, create process innovations, and enhance productivity. These technicians also develop and maintain the nation’s energy supply, electrical grid, and infrastructure. Conventional wisdom holds that high-skilled, blue-collar jobs are rapidly disappearing from the American economy as a result of either displacement by machines or foreign competition. But the reality is more complex. High-skilled jobs in manufacturing and construction make up an increasingly large share of total employment, as middle-skilled jobs in those fields wane. Moreover, workers at existing STEM jobs tend to be older and will need to be replaced.”

The think tank’s thinking is bolstered by its use of a data collection project sponsored by the US Dept. of Labor called O*NET (Occupational Information Network Data Collection Program), which uses detailed surveys of workers in every occupation to thoroughly document their job characteristics and knowledge requirements.

Jobs requiring high-level STEM knowledge can be found in every sector of the economy, although there are large differences in the demand for STEM knowledge across sectors. Utilities, professional services, construction, mining, and manufacturing are the five most STEM-intensive sectors.

Across broad regions of the country, the West stands out as the most STEM oriented and the Northeast the least, says Brookings. Among Western states, only Nevada and Hawaii score low on STEM knowledge. Meanwhile, some of the most STEM-based metropolitan economies are familiar tech hubs like San Jose, Washington, D.C., Seattle, Boston, and San Diego says Brookings.

“Houston makes the list because of its strong energy sector. Baltimore is home to the Johns Hopkins University and other hospital systems and a strong defense industry cluster in the suburbs. The others — Bakersfield, CA, Palm Bay, FL, and Madison, WI — may be more surprising. Palm Bay has a large IT industry presence surrounding the Kennedy Space Center and Cape Canaveral Air Force Station. It is also home to 11 percent of the nation’s aerospace engineering and operations technicians. Bakersfield has a large energy sector and, hence, employs a high percentage of its workers in technical jobs related to industrial construction, geology, and engineering. Madison is home to one of the country’s leading research universities at the University of Wisconsin, which, for example, employs many scientists it its College of Agriculture and Life Sciences. The metro area also employs a large number of actuaries in its significant accounting industry.”

Moreover, says Brookings, STEM-intensive metro areas include several others “outside the typical high-science, high-tech orbit. Dayton, Ohio; Detroit, Mich.; Hartford, Conn; Minneapolis-St. Paul, Minn.; and St. Louis, Mo., all rank within the top 20 on the STEM share of total employment thanks in part to their strong specializations in high-skilled manufacturing.”

As of 2011, according to Brookings’ analysis, 26 million US jobs — 20 percent of all jobs — require a high level of knowledge in any one STEM field.

If STEM’s so important even without a four-year degree, then it figures to be important enough to make a mark in primary and secondary education. And indeed it has. Brookings points to the National Consortium for Specialized Secondary Schools in Mathematics, Science, and Technology (NCSSSMT), which began in 1988. It now includes about 100 secondary schools as members.

Texas spends roughly $39 million annually, in partnership with addition charitable dollars, to fund 51 T-STEM schools for 15,000 students in Grade 6 and up. Virginia has established 17 STEM academies. Metropolitan Nashville Public Schools offers at least nine high school STEM academies and engages the Chamber of Commerce and other organizations to keep the curricula relevant. 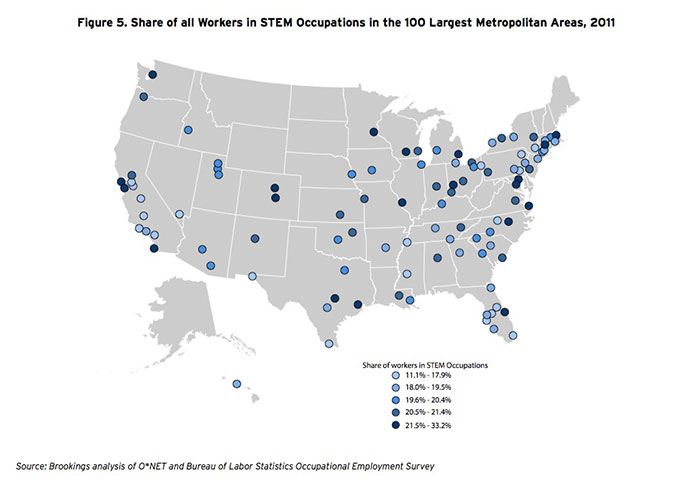