The latest report shows where university research parks are headed, and why.

A new Bayer Bee Care Center will be nestled into the Bayer CropScience Research Triangle Park campus. Bayer expects the building to be complete near the end of 2013. The company earlier this month announced an overall $33-million investment in renovating its North American headquarters at RTP.
Photo courtesy of Bayer CropScience US
by ADAM BRUNS
T

he typical university research park is 119 acres (just over 48 hectares), has seven buildings open and is located in a suburban jurisdiction with a population of 500,000 or less. 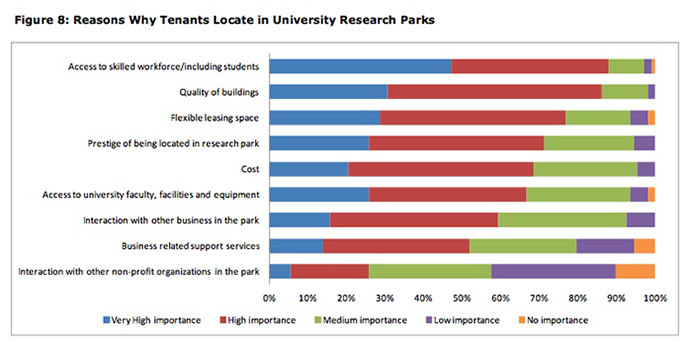 The 108 university research parks responding to the survey report that 963 new businesses have graduated from their incubators or related startup space in the last five years. The footprint of the parks leans heavily toward the East Coast. Two that stand out for their longevity continue to stand out because of new growth.

University City Science Center in Philadelphia, founded in 1963, is home to such innovative concepts as the Port business incubator for emerging international technology companies; the Bullpen, which is focused on small startups; and its Quorum series of programs and networking activities. 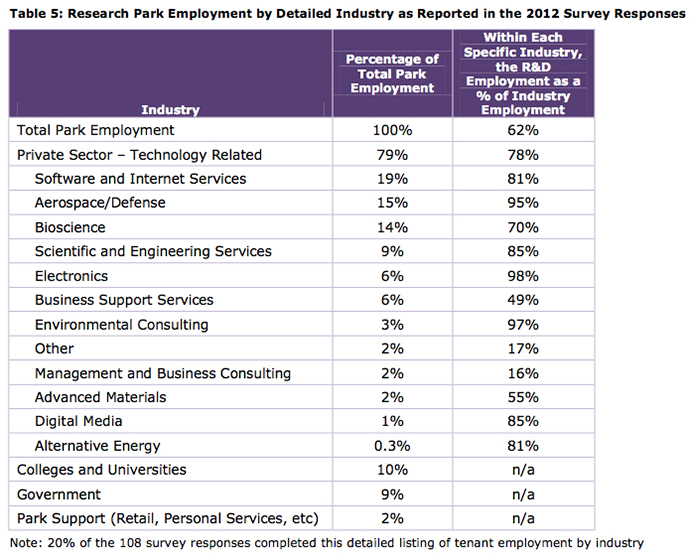 The AURP/Battelle study found which industries are represented most frequently on research park property, with life sciences a leading sector.
Source: AURP/Battelle report

“We’re excited to be celebrating the commercialization of our Veriflow product suite for food pathogen detection and the expansion of our company here at the Science Center,” says Pascal. “The Science Center has been an invaluable partner and has actively contributed to our extraordinary growth throughout the years. We look forward to building-out a first class facility here and creating jobs in a community that has helped us flourish.”

Invisible Sentinel is the fifth company since 2009 to move out of the Port and remain on the Science Center’s campus. Other Port companies that have remained on campus include Avid Radiopharmaceuticals, Integral Molecular, Pulsar Informatics and OptoFluidics. Together, the five graduate companies account for 195 jobs in Philadelphia.

More than 350 companies — including SEI Investments, Centocor and Bentley Systems — have graduated from the Science Center. The 93 that remain in the Greater Philadelphia region account for more than 15,000 direct jobs and contribute more than $9 billion to the annual regional economy.

Down the coast, the granddaddy of them all, Research Triangle Park in North Carolina, boasts 7,000 acres (2,833 hectares), more than 170 companies, more than 39,000 workers and 22.5 million sq. ft. (2.1 million sq. m.) of built space. But it too is adapting for the future, as its 2012 Master Plan includes a “Triangle Commons” mixed-use center with transit-oriented development and up to 1,400 residential units in addition to a wide range of research-oriented office and incubator space. 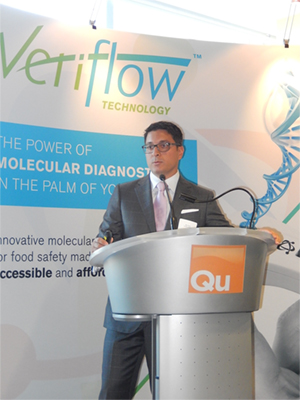 Invisible Sentinel Co-founder and Chief Business Officer Ben Pascal speaks at the company’s expansion announcement at University City Science Center in Philadelphia earlier this month. The 18 jobs being created will all stay in Philadelphia, joining the more than 15,000 direct jobs in the area created by companies which have graduated from the Center since its founding in 1963.

Last week Bayer CropScience signaled its long-term commitment by announcing the beginning of renovations to its North American headquarters at RTP. The $33-million project, scheduled for completion in 2015, will allow the company to accommodate substantial growth and bring more of its employees together over the next decade. Completed facilities will eventually house more than 700 employees working to cultivate the latest developments in sustainable agricultural solutions.

“Bayer CropScience is dedicated to being a pivotal organization in the socio-economic life of RTP,” said Jim Blome, president and CEO of Bayer CropScience LP. “Revitalizing our current office space to accommodate growth marks a significant investment for Bayer CropScience in the area. By using our facilities to attract and retain the region’s top talent, we are ensuring that Bayer CropScience will continue to contribute to RTP’s viability and reputation as a top location for business and scientific development.”