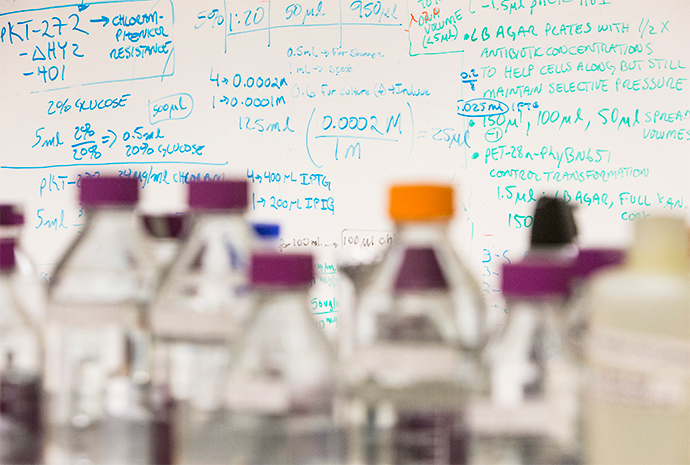 A whiteboard in a bio-engineering lab shows the formulas and equipment used in the East Carolina University classroom.
ECU photo by Jay Clark
by Steven Pearce, NCEast Alliance

A US manufacturer of televisions used to promote its product with the saying, "The quality goes in before the name goes on." Quality is paramount today in discussions of manufacturing. In particular, Quality by Design (QbD) is one of the front-burner concepts discussed in pharmaceutical circles today, relating to the notion of understanding and planning for all the variables in drug development through commercialization.

But the concept can and should be applied to other aspects of the life sciences industry as well. It’s even an apt description for the state of the industry in eastern North Carolina. In a region beset by problems resulting from the disintegration of textiles, apparel and tobacco, there are a growing number of examples of a new life built upon science and technology sectors and the genuine commitment of its people to infuse quality in their work and the products they make.

Situated just east of the world famous Research Triangle, the area served by the BioEast Alliance has emerged as a major life sciences region in its own right — primarily biopharmaceutical development and manufacturing. Private-sector firms employ more than 8,000 workers at world-class facilities of leading companies. GSK, DSM Pharmaceuticals (now merging with Patheon), Hospira, and Merck are global companies that have had pharmaceutical production facilities in the region for decades. The continued development of this industry cluster has resulted in a dynamic support network, a steady stream of innovation, better wages and a higher quality of life for area residents.

The small city of Wilson, in particular, has been a big winner over the last several years, attracting Purdue Pharma, Sandoz (a Novartis company) and Becton Dickinson (BD). In 2008, BD announced plans to construct a $100-million-plus, 80-employee sterile single-dose injectables facility in the Wilson Corporate Park, where it now manufacturers all its drug products. As a result, Wilson now boasts 1,200 employees, 1 million sq. ft., and over $500 million invested in the biopharma sector.

Wilson sits on I-95 halfway between Boston and Miami and halfway between Raleigh (NC State University with colleges of engineering, ag/life science and management) and Greenville (East Carolina University with schools/colleges of medicine, nursing, allied health, dental medicine, business and engineering/technology). Wilson also has a key attraction — sizeable surplus water and wastewater treatment capacities, which are essentials for the biopharma industry. 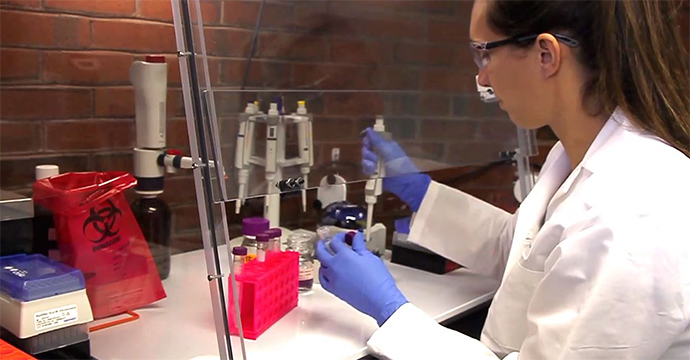 Genome ID Group’s new Center for Advanced Forensic DNA Analysis in Greenville, N.C., is supported by a new science degree program with a focus on forensic science that launched this semester at Greenville’s East Carolina University. The center plans to eventually employ 130. Genome ID Group CEO Michael Heffernan has said Greenville was chosen because of proximity to ECU and its associated medical complex, as well as to the life sciences hub in Raleigh and at Research Triangle Park.
Photos courtesy of NCEast

At the eastern edge of the BioEast Alliance is Greenville, NC, home to East Carolina University (ECU) with nearly 28,000 students (3) and its Brody School of Medicine (SOM). Both serve as critical support elements in development of the life science cluster. RTI Surgical (biomedical devices), MxBiodevices, and CTMG (cGMP-like clinical trials management services) all have ties to ECU (4). RTI Surgical (whose Greenville origins trace back to Encelle) and CTMG were founded by a research physician at the medical school.

This month the UNC Board of Governors approved ECU's College of Technology and Computer Science to the College of Engineering and Technology. It also approved a new master’s degree in biomedical engineering within the college.

Started in 2010, biomedical engineering is the second largest concentration in the engineering department. Jobs in the sector are expected to grow by 27 percent in the next 10 years. ECU officials plan to offer an integrated bachelor and master’s of science in biomedical engineering beginning in 2015 so students can start on graduate work their senior year.

In in an op-ed article published recently by the Greenville Daily Reflector, ECU Chancellor Steve Ballard said about 95 percent of ECU’s engineering graduates are offered jobs within 90 days of graduation, and about 65 percent of graduates stay in North Carolina — with about half of those working in eastern North Carolina. 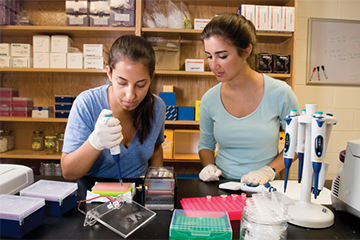 While ECU has been recognized for its efficiency in commercializing research (consistently ranked in the top 50 among all research institutions), Vidant Health, the regional hospital system serving 1.4 million people in all 29 counties of eastern North Carolina, is being recognized for its own achievements. The regional healthcare system recently became one of only four in the nation to receive the 2013 John M. Eisenberg Patient Safety and Quality Award (6).

Companies Invest in Themselves to Improve Quality

Yet another sign of the importance of investing to assure quality is Hospira, Inc. (formerly known as Abbott Labs, the first pharmaceutical manufacturing facility established in the region). The world's leading provider of injectable drugs and infusion technologies recently unveiled a new quality and analytical testing laboratory where employees will be responsible for evaluating and testing more than 450 different products. The laboratory features the latest technology and advancements in quality and analytical testing and inspection. It is part of a $270-million investment that will create 200 additional jobs at the Rocky Mount, NC facility.

"Rocky Mount's new laboratory, coupled with our investments throughout the plant, will help ensure that we continue to supply high-quality, more affordable medicines to customers and patients who need them," said Marty Nealey, vice president of Hospira’s Rocky Mount Operations, which employs more than 2,600 people.

DSM Pharmaceuticals Products just announced a merger with Durham-based Patheon Pharma. Its Greenville facility (originally built by Burroughs Wellcome) is a leading provider of high-quality custom contract manufacturing and development services to the pharmaceutical and biopharmaceutical industries. With a deal valued at $2.6 billion the new organization is positioning itself to be an even larger player in the global pharmaceutical industry with estimated sales approaching $2 billion. 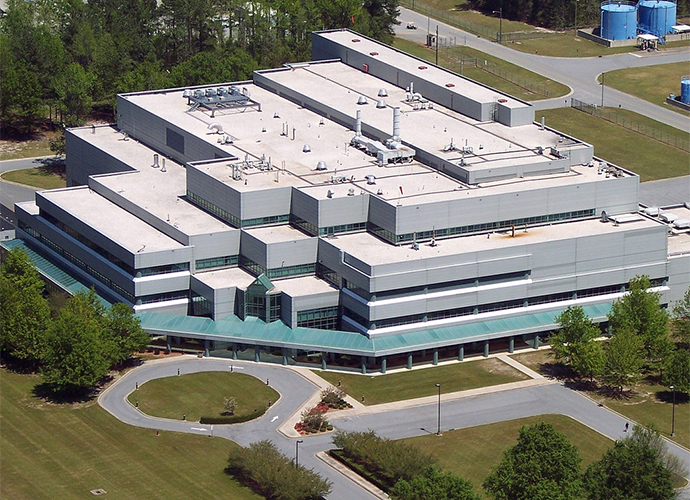 DSM has invested more than $160 million since 2001 to expand and modernize its 1.8-million-sq.-ft. Greenville operation, and was named Pitt County Industry of the Year in 2007 and 2013. In 2012 alone, DSM created 139 jobs in Greenville.
Photo courtesy of DSM

DSM has invested more than $160 million since 2001 to expand and modernize its 1.8-million-sq.-ft. Greenville operation, and was named Pitt County Industry of the Year in 2007 and 2013 for its commitment to the community, the environment, and its employees — yet another sign of quality. In 2012 alone, DSM added 139 jobs at its Greenville site. DSM was also recently awarded a contract to join the Biomedical Advanced Research and Development Authority’s (BARDA) Fill/Finish Network as part of the pandemic response system established by the US Government - a designation only awarded to companies exhibiting the highest standards of quality control. With the merger, there may be more good things on the horizon for the largest campus in the Patheon global network.

Smaller companies are also contributing to sector growth in the BioEast Alliance region. Metrics, a local start-up with 300 employees founded by a Burroughs Wellcome chemist and a faculty member from ECU's Brody School of Medicine, became a subsidiary of Australia’s Mayne Pharma in 2013, and recently announced the addition of a $1.6-million Gerteis Mini-Pactor fast-track development lab that will provide its formulation scientist greater flexibility in serving clients. MxBiodevices just received a second round of funding ($237,878) from the NC Biotechnology Center to prepare for manufacturing of clinical trial quantities of its lead product, Dermagrid, being developed to treat diabetic foot ulcers. Other members of the BioEast Alliance cluster, like Aylward (packaging equipment, New Bern), West Pharma Services (closures, Kinston), and Flanders Filters (HEPA filters/systems, Washington), continue to provide quality products and services for the big players in the biopharmaceutical industry. 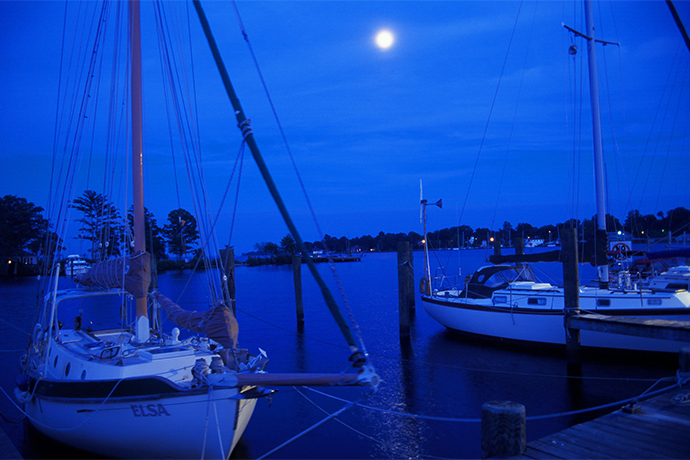 Among the quality assets in Eastern North Carolina are its serene coastal locations, such as the harbor in Elizabeth City.

Among other initiatives, the NCEast Alliance, an economic development corporation serving the region's more than 1 million residents, was instrumental in helping start the Marine Biotechnologies Center of Innovation in Morehead City, which is focused on research and commercialization (mbcoi.net). The MBCOI works closely with the four marine labs in coastal North Carolina, local and regional economic development organizations and the North Carolina biotechnology center.

The NC Community College BioNetwork is the nation’s largest network of education and training services for the bioscience cluster and excels in developing industry-specific curricula. The BioNetwork can also provide worker training in the Capstone Center hands-on aseptic suite. Several community colleges in the BioEast Alliance region offer two-year degrees as well as specialized training to support the biopharmaceutical industry.

Additionally, the Biomanufacturing Research Institute and Technology Enterprise (BRITE) research facility supporting education and training for analytical technology and drug development, QA, and QC. BRITE complements the cGMP training lab in the ECU Department of Chemistry — students taking the cGMP course dramatically improve their employability at biopharma companies; companies believe the course accelerates the efficiency of a new employee by at least 6 months.

A recent labor analysis conducted by a leading bio-science site location consultant concluded that Eastern North Carolina has sufficient talent available to staff a 400-employee biomanufacturing operation without any significant difficulties. “We believe our communities are well-prepared to accommodate continued growth of the life science sector,” stated John D. Chaffee, president/CEO of the NCEast Alliance. “They have invested to insure adequate infrastructure and attended to the science and technology workforce needs critical to the growth of this particular industrial sector,” he continued, “the future seems promising.”

The NCEast Alliance is a regional economic development corporation serving more than 1 million residents within several small metropolitan and micropolitan areas from the fringe of the Research Triangle to the Atlantic Coast. The Alliance provides community capacity building and assists companies with site location and expansion assistance. For more information on the NCEast Alliance, visit us at www.nceast.org or call 1-800-474-8499. 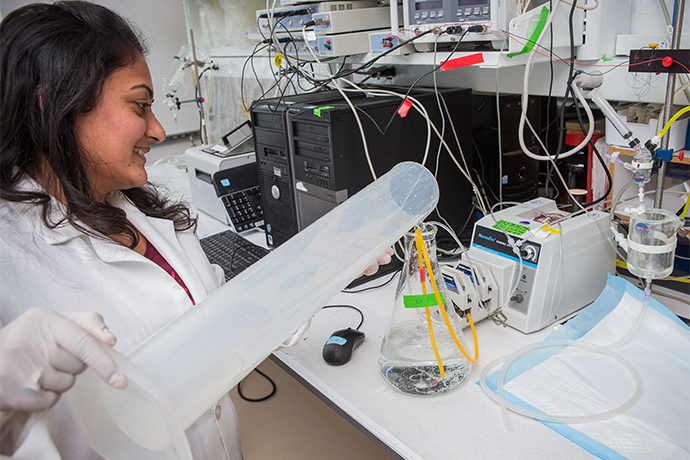 Spaces for collaborative research are abundant on the fourth floor of the East Carolina Heart Institute. The 37,000-sq.-ft.  space officially opened with a tour for Board of Trustees members Feb. 13. Pictured is research tech Hetal Patel.
ECU photo by Cliff Hollis