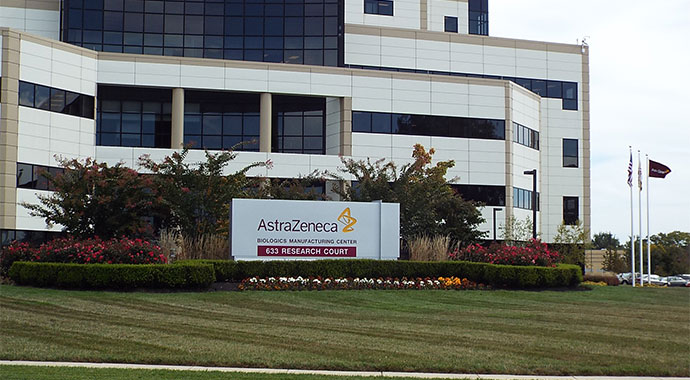 AstraZeneca’s new expansion in Frederick will add 300 new jobs. Its last major investment there was in 2005, when the company invested $250 million and created 475 jobs.s
Photo courtesy of AstraZeneca
by ADAM BRUNS

AstraZeneca on Nov. 21 announced plans to expand its biologics manufacturing center in Frederick, Md. $200-million-plus project will increase production capacity and will help position the company to keep pace with a growing demand for the development and use of biologics, which currently represent nearly 50 percent of AstraZeneca’s overall pipeline.

The expansion project, expected to be complete in mid-2017, will add approximately 40,000 sq. ft. of manufacturing, laboratory and administrative space. The expansion is also expected to bring a total of 300 new jobs to the site.

“Biologics are an important part of AstraZeneca’s overall capabilities, in addition to our strengths in small molecules and protein engineering,” said Andrew D. Skibo, regional vice president of biologics supply for AstraZeneca. “Our global biologics research and development arm, MedImmune, has a robust pipeline of more than 120 biologics, including more than 30 in clinical development. The expansion of our Frederick facility will support the progression of drug candidates across our core therapeutic areas, ultimately aiding us in our efforts to make a meaningful difference in the lives of patients through scientific leadership and innovative new treatments.”

AstraZeneca’s Frederick biologics manufacturing center, established in the 1990s, is an FDA-licensed, large-scale cell culture production facility, with hundreds of thousands of square feet of administrative, production, warehouse, laboratory and utility space. It’s the largest biologics manufacturing facility within the company’s global network and portfolio of assets. The site currently produces a pediatric medication, as well as other investigational biologic products.

AstraZeneca spokesperson Alisha Martin says the 300 new positions “will include manufacturing, laboratory and administrative roles. We expect the vast majority of these roles to be filled by 2017.” She says incentives discussions are currently underway with the city, county and state.

Last year the company added 300 other positions in Maryland when it announced its R&D operations consolidation to three global centers: Maryland (Gaithersburg), the UK and Sweden.

The savings from such consolidation go beyond simple headcount efficiencies. The company’s MedImmune arm in November became the first biotechnology company in the United States — and the first company in the state of Maryland — to earn certification under the U.S. Department of Energy’s (DOE’s) Superior Energy Performanc (SEP) program as a result of significant improvements the company has made to its overall energy performance at the Gaithersburg headquarters facility. The division has improved energy performance by 8.54 percent in three years — cost savings from reduced energy use and more efficient maintenance/operations at the Gaithersburg headquarters exceed $1 million per year.

In addition to its biologics production growth in Frederick, Md., AstraZeneca’s MedImmune biologics R&D division has continued to grow at its HQ in Gaithersburg, Md.
Photo courtesy of MedImmune