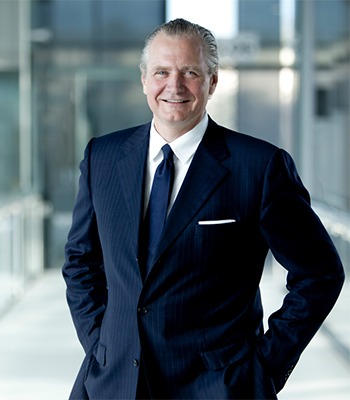 In late November, Merck KGaA, the Darmstadt, Germany–based pharma, chemical and life science company, made the latest in an ongoing series of investments in one of the most R&D-intensive economies in the world: Israel.

Merck raised its stake in Jerusalem-based company Qlight Nanotech and is currently considering whether to apply with selected Israeli partners for research grants in the Nofar program of Israel’s Ministry of Industry and Trade. This program, which was used as a basis to start Qlight Nanotech, has been designed by the Israeli government to support the industrial application of academic research. The projects Merck KGaA is considering applying for are in the field of high-tech materials.

Qlight Nanotech develops products for use in display technologies and energy- efficient lighting systems. In September it opened new laboratories to conduct further product-related R&D. The company is a spin-off subsidiary of Yissum, the technology transfer company of the Hebrew University of Jerusalem.

Not long after its re-upped investment in Qlight, Merck welcomed to its Israel Bioincubator two new companies: Metabomed and ChanBio. And the company is continuing longstanding cooperation with research institutes such as the Weizmann Institute of Science as it seeks innovations that could become the basis for future products.

This graph from the OECD shows Israel at the top of the world in 2009 in terms of gross domestic expenditure on R&D as a percentage of GDP.

“The innovative landscape of Israel fits in perfectly with our ‘Living Innovation’ claim,” said Stefan Oschmann, Merck KGaA’s Executive Board member responsible for the Pharmaceuticals businesses, at the company’s site in Yavne, Israel. “In Israel we not only have a past which has led to some of our most important products like Rebif and Erbitux, but also a promising future because we continue to find very interesting and cutting-edge science and the support here in Israel to translate that science into products.”

Innovations that have emerged from the Weizmann Institute and its scientists include amniocentesis; a method for growing hybrid seeds that prevents the transmission of disease from one generation to the next and helps protect edible plants from pests; affinity chromatography, a key tool for purifying biological materials in the biotech business; and living polymerization, a fundamental technique of the modern polymer industry. For solving the structure of the ribosome, the cell’s protein factory, and revealing its means of action, the Institute’s Prof. Ada Yonath was awarded a Nobel Prize in Chemistry. Her research should speed the development of antibiotic drugs that are more efficient, especially against antibiotic-resistant strains.

The Institute is currently leading the establishment of the National Center for personalized medicine, which will bring together under one roof skilled researchers and advanced experimental systems to perform large-scale studies of the genome and the population of cellular proteins. The center plans to provide its tools to all users — researchers from academia, hospitals and industrial biotechnology and pharmaceutical firms. Heading the Center is Dr. Berta Strulovici, a Weizmann alumna who was previously vice president of basic research in charge of building a center of excellence for early drug discovery for Merck Worldwide.

The €10-million Merck Serono Ventures Israel Bioincubator Fund is focused on pre-seed and seed opportunities originating in Israel. The incubator, which became fully operative in April 2012 so far has housed only Neviah Genomicsn (since August 2012), but Merck expects several more companies to enter. Metabomed focuses on research in the field of cancer metabolism and computational biology. Its founders besides others are from the Tel Aviv University and the Technion Israel Institute of Technology, both in Israel. ChanBio will concentrate on the discovery of antibodies selective for ion channels considered to be significant therapeutic targets for the treatment of multiple sclerosis.

"Strategic investments in external innovation are a key component of our strategy,” Oschmann said. “Our MS Ventures fund demonstrates our commitment to creating long-term relationships with and tapping into the innovative entrepreneurial spirit of biotech companies.”

Merck recently announced it would increase the 2013 and 2014 R&D budgets for its two performance materials and life science tools divisions, while global R&D spending for its pharmaceuticals businesses would be close to the year-earlier level. In 2012, Merck KGaA spent a total of €1.5 billion on R&D, equivalent to 14.1% of Merck Group sales. A presentation by Oschmann showed how Israel fits into the US$15-billion, 38,000-employee company's global expansion of its R&D footprint (see map).

“Israel has a quality education system and above-average intellectual capital," said Oschmann. "Compared with other countries, Israel has the highest concentration of scientists and engineers in the world. In addition, cooperation partners appreciate that Israeli scientists often work in a less conventional manner and are faster at implementing their results.” 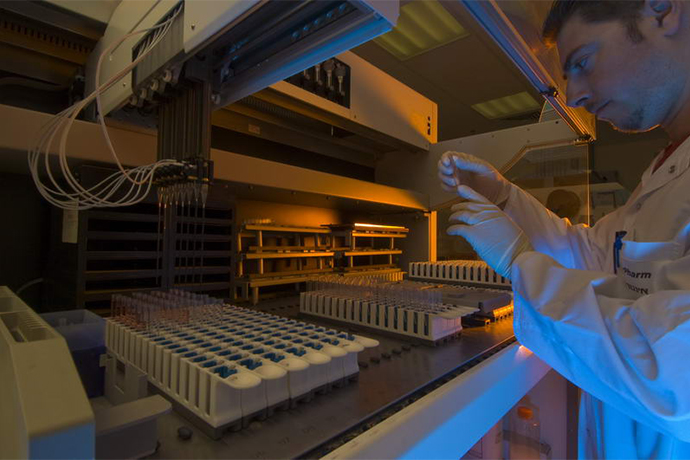 R&D takes place at Merck KGaA’s biopharmaceuticals division in Yavne, Israel, where the company moved into more spacious workspace in 2007.

Israel took third place in the “Innovation” category in the latest Global Competitiveness Ranking published by the World Economic Forum. Globally, the country ranks fourth in scientific activity. Six Israelis have won the Nobel Prize in Chemistry in the past decade. Its spending on R&D as a percentage of GDP is consistently and substantially higher than that of such advanced research nations as Japan, the US and the UK.

Earlier in November, the biopharmaceutical division of Merck KGaA signed a memorandum of understanding with Israel biotech company Kadimastem, which develops human pluripotent stem cell-related products. It follows the signature of a previous agreement with Kadimastem in 2012.

Also in 2007, Merck KGaA, Darmstadt, Germany, was the first German and the first pharmaceutical and chemical company to sign the Global Enterprise Framework Collaboration Program of Israel’s Ministry of Industry and Trade. “This program gives us continuous support in identifying and creating new partnerships. In that framework we surely expect more in the upcoming future,” Oschmann said.

Merck's Millipore business is based in Rosh Haayin. Merck Serono, which has been in Israel for three decades, performs R&D in Yavne, where it employs 37 people. Another 25 work at the company's commercial activities location in Herzliya-Pituach.

"Israel is one of the leading hot spots in science and technology for life science and high tech materials," said Karl-Ludwig Kley, chairman of the Executive Board of Merck. 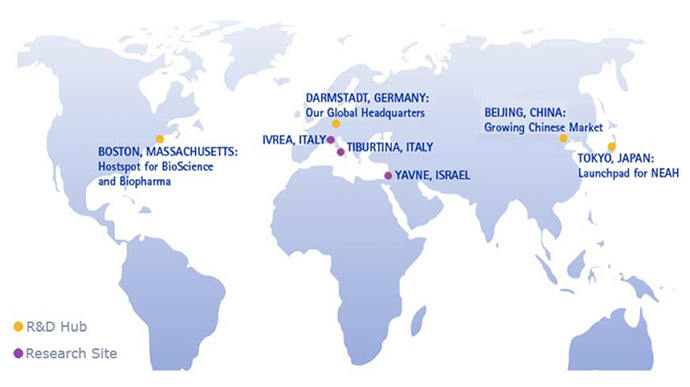 This map from a November presentation by Stefan Oschmann in
Yavne shows how the company is growing its R&D footprint globally.