What distinguishes the 100 healthiest workplaces in the
United States? The company ranked first shares some insights. 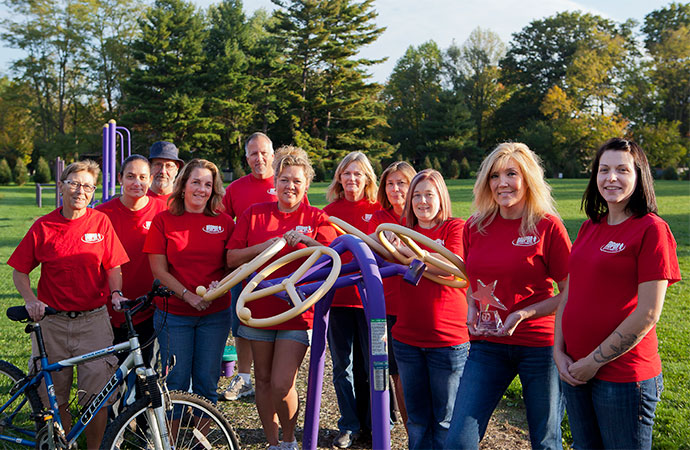 Linda Brinson (second from right) and members of the wellness team at Draper, Inc., celebrate the company's No. 1 ranking among the 2014 Healthiest Workplaces in America.
Photos courtesy of Draper
by ADAM BRUNS 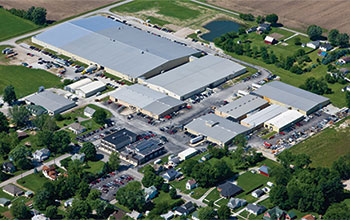 Draper's headquarters and manufacturing complex in Spiceland, Ind., employs just over 500 people in a town with a population of just over 800.

Does workplace wellness correspond to the economic vitality of a company or an area? If so, then the new 2014 Healthiest Workplaces in America rankings tell us the Midwest is fit as a fiddle.

Announced by Indianapolis-based health analytics firm Healthiest Employers on Jan. 15, the rankings spring from regional competitions involving roughly 4,000 employers across all sectors from 44 large markets across the United States, says Andrew Lockerbie, strategic initiatives director for Healthiest Employers. The rankings touch around 60 percent of the Fortune 100, assigning each company a Healthy Employer Index (HEI) number through regional events. In the next stage, companies can participate in the Healthiest 100 Strategic Wellness Assessment, which involves a deeper dive into some of the criteria.

"This highly selective award recognizes employers who demonstrate exceptional leadership in using wellness as a strategy to drive workplace productivity, employee health, and community well-being,” said Rod Reasen II, president of Healthiest Employers. “As these employers demonstrate, every organization has a path to the Healthiest 100, regardless of size, industry or geography."

While a few large corporations such as Cerner Corp. and Northrop Grumman show up in the Top 100, others with strong scores, such as Intel and Nike, don't make the list simply because they didn't choose to participate in the next-stage assessment, says Lockerbie.

Facilities don't directly factor into the rankings, as the evaluation looks instead at the following: culture and leadership; foundational components; strategic planning; communication and marketing; programming and interventions; and reporting and analysis. The awards recognize employers who have comprehensively incorporated the most effective employee wellness programs and practices.

It's no surprise that health-associated organizations (including non-profits) show up well in the Healthiest 100, as do organizations from the Midwest, where the rankings first got under way just six years ago.

"The folks in the Midwest have had a couple extra years of digging in, understanding their index and working to improve their scores," says Lockerbie, "so they have an edge." Nevertheless, he says, "We were shocked, when results were tallied and posted, that a number of Indiana companies scored very well, including numbers one, two and seven."

The Top 25 Healthiest Workplaces in America

The shock was due to the fact that Indiana has one of the highest smoking rates of any state in the country, and has some challenges with body mass index (BMI) as well. In America’s Health Rankings released in late 2013, Indiana ranked a lowly 41st. The rankings noted high rates of obesity and diabetes, though the prevalence of physical inactivity decreased from 29.2 percent to 25.9 percent of adults over the previous year.

But apparently, observes Lockerbie, what Indiana residents do is "eat too much, smoke too much and work pretty hard at wellness."

“We are honored to receive this recognition,” said John Pidgeon, president of Draper, in a news release. “We want to commend Draper’s Safety and Wellness Director, Linda Brinson, and the members of our Wellness Committee for their hard work, and all Draper employees and their family members who have supported this effort. We also want to recognize the Henry County Hospital, who staff the Draper employee health clinic and share the cost of an employee health coach with us.”

Brinson joined the company seven years ago. In an interview, she says what began in 2007 as a medical clinic for employees and their dependents has evolved into much more.

"They see around 300 patients a month," she says of the clinic, which not only treats patients but helps educate them about healthy habits and practices. Attending seminars at Ball State University, among other resources, Brinson crafted a program by focusing on "the five biggest hitters on our medical insurance," which she says are probably the five biggest hitters for most workplace populations: BMI; high cholesterol; high blood pressure; tobacco use; and glucose count.

Five years ago the company turned a field on its property into an outdoor fitness park, complete with fitness equipment, a walking track, volleyball, tetherball, ping pong and even the ubiquitous Midwestern game of cornhole or bean bag toss (minus the usual pitchers of beer).

Brinson says the park was popular right away, even at unpopular times of day.

"The second shift gets off at four in the morning," she reports, "and they would go over and shine their headlights on the volleyball court so they could play volleyball before they went home."

While some lighting has since been introduced, Brinson says it's kept low, as Draper's footprint is surrounded by homes. Some of the surrounding farmland property owned by Draper is rented out to local farmers. And some has been churned up for yet another wellness-oriented endeavor.

"Next to the park we have another field that was empty," says Brinson. "We plowed that up and allow employees to put in a garden. They enjoy that, and they compete to see who’s growing the best veggies."

In addition to access to gyms and fitness rooms in town, Draper employees also participate in company-sponsored challenges, the most recent of which was the Walk to Hawaii. Those who walked the distance equivalent to the miles from Indiana to Hawaii were entered into a drawing, and the winner received an all-expenses-paid trip to the nation's 50th state.

Though it doesn't factor into the company's healthy-work force status, Draper's product line is notable for its leadership in environmentally aware products and practices, including membership in the U.S. Green Building Council and more than 12 LEED-accredited professionals on staff. And its very products may contribute to workplace health in more ways going forward.

As it happens, Draper's ranking coincided with the launch of the Natural Interior Daylight (NID) initiative by Eneref Institute, a research and advocacy organization focused on environmental and social responsibility opportunities as a catalyst for change. "The campaign is tailored to advance the specification of daylighting as a significant light source in commercial and residential facilities," said Eneref. "Multiple lighting studies have demonstrated increased health and human productivity benefits for students and employees in spaces with properly designed natural interior daylight. And daylight harvesting, including windows, skylights and tubular daylighting devices, in place of or in conjunction with traditional electric lighting, can significantly reduce a building’s energy load."

“You don't need a degree in illuminating engineering to know that a room with a view — one with windows that lets in natural light — is what we desire. Inherently we just know,” said Seth Warren Rose, founding director of Eneref Institute. “Yet, while few technologies combine as many health and environmental benefits, the daylighting market remains only a sliver of what it could be.” 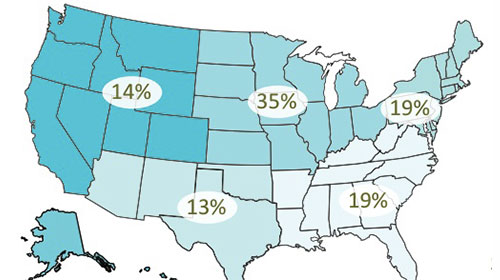 This map shows the geographic distribution of the 2014 Healthiest 100 Workplaces in America.
Map courtesy of Healthiest Employers

From Knowing to Doing

Healthiest Employers notes that most successful programs "are typically supportive, not directive." They also note that each employer will have its own unique blend of solutions, whether it's a bike-to-work program in California, sunrise fitness classes or a Type 2 diabetes education program. What's next for the Healthiest 100? The answers fall into the following categories, says the report:

Athleticism vs. Health & Wellbeing: "Good health takes more than gym visits. Everyone has employees who follow workouts with junk food and stress out at work and at home. How can this cycle be changed?"

Health Promotion vs. Consumerization: "Most Healthiest 100 employers mainly focus on fitness, nutrition and disease management. How will they transform employees into savvy health decision makers?"

Executive Champion vs. Executive Ego: "What does it mean to be an effective champion? Are superathletic CEOs more or less motivating than CEOs who share personal healthy lifestyle challenges?"

Left Brain vs. Right Brain: "For the Healthiest 100, analytical and financial skills are quickly becoming as important as health promotion expertise and a passion for wellness. How will they address gaps in these skills?"

Asked how wellness works its way into everyday work, Draper's Linda Brinson notes that the company just received Indiana Safety and Health Achievement Recognition Program (INSHARP) certification, becoming just the 43rd company in Indiana to achieve that OSHA-recognized status. She says her ergonomics team is ramping up activity with some specific training next month, in part to deal with a challenge many firms face today: an aging work force. In addition to a constant stream of walkers at lunchtime or break time, she says, stretching programs help workers prepare for their shifts and prevent injury.

Over the years, she's seen the results, and eagerly awaits the latest update.

"We are down to less than 50 smokers, out of a little over 500 employees," she says. With just the Walk to Hawaii alone, total work force body weight was down by a collective 3,000 pounds. People also are going off their cholesterol medicine and sleep machines. Brinson says what began as awareness has evolved into action, and behavior changes, helped by a health coach from the hospital, have spread from employees to their entire families. The key, she says, is to set goals and then help and encourage people along the way.

"Not everything is going to work, but you just keep going after it," she says. "We also try to make it well rounded. It’s not just these top five things. We try to dig a little deeper. We know stress is a huge driver of health issues, and financial issues are a huge driver of stress. So we offer financial classes."

In those classes' first year, employees paid off $26,000 in debt. Stress levels are also helped by the fact that the company in all its 112 years in business has never laid off an employee. "Once people get here, they don't want to leave," says Brinson, though that phenomenon simultaneously offers her the challenge of an aging work force averaging mid-40s. "You can see that's something I have to focus on," she says. 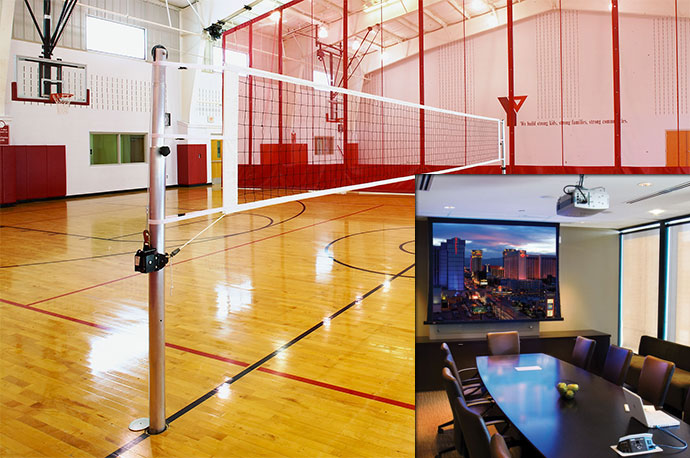 Draper sees most of its revenue from its line of projection screens and equipment for everything from conference rooms and churches to home cinema, but it also makes more fitness-oriented products such as gymnasium dividers, wall pads, wrestling mats and basketball goals ... appropriate for an operation just a stone's throw from the Indiana Basketball Hall of Fame in New Castle.