More Than a Snapshot

Jones Lang LaSalle's latest cluster analysis shows why digging deep is worth it. 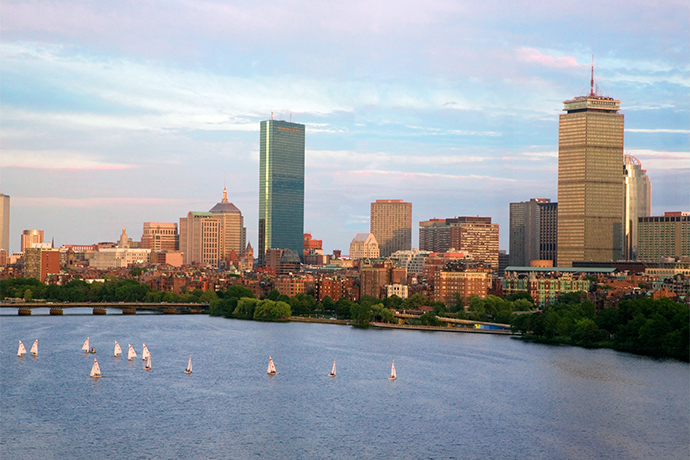 Greater Boston continues its reign as the leading US life sciences cluster, according to the latest analysis released by JLL.
Photo by David Fox courtesy of Greater Boston Convention and Visitors Bureau
by ADAM BRUNS
Responsive Table 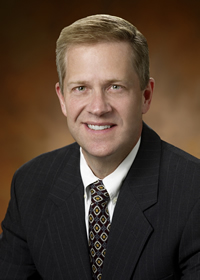 For better or worse, industry clusters always evolve. Thankfully, as researchers learn to mine the right subsets from big data, reports about clusters are evolving mostly for the better.

Such is the case with the third annual JLL Global Life Sciences Cluster Report released by Jones Lang LaSalle during the BIO International Convention in San Diego in late June. Drawing on sources and databases including the World Intellectual Property Organization (WIPO), NIH, Battelle, OECD, UNESCO, NSF and Burrill, the 134-pp. report shows how far it's come from its first iteration two years ago, going deep and long with statistical insights related to patents, education levels and JLL's own "facilities scorecard" analyses of the top players.

"The biopharmaceutical industry is undergoing a significant transition as start-ups, specialty firms and mid-tier companies become the leading source of new product innovation," said Roger Humphrey, Executive Managing Director of JLL's Life Sciences group in the Americas. "This shift is reflected in the changing physical landscape of biopharmaceutical operations, including real estate."

In a letter kicking off the report, Humphrey cites one of the leading indicators for this assertion: In 2013 in the US alone, life sciences companies completed 52 initial public offerings worth $7 billion, up from just 16 IPOs worth $1.1 billion in 2012. And 32 more IPOs sprung to life during the first quarter of 2014. The reasons offered by Humphrey essentially boil down to this: While Big Pharma keeps looking in the organizational mirror, SMEs keep looking through the scientific microscope, driving innovations that in turn drive growth in business, jobs and workspace.

In parallel, the "SME"s among nations are doing the same.

"The United States and Europe have enjoyed deep-seated roots as the leaders of high-value aspects of the development cycle, like new product research & development (R&D)," writes Humphrey. In recent years, however, innovative leadership is recalibrating, with many developing nations making moves to grow their domestic capabilities for innovation. Asian countries, led by Japan, Korea and China, have dramatically increased their share of patent applications and the number of doctorate and other higher education degrees awarded in science and engineering fields. The United States remains the dominant contributor of life sciences patent applications by a significant margin, but its year-on-year growth rates have fallen behind." 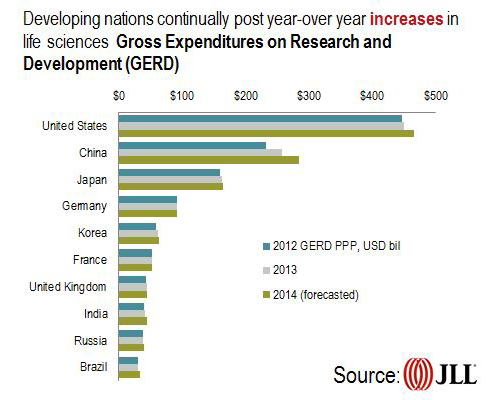 JLL's main portal for tracking innovation is analysis of Patent Cooperation Treaty (PCT) applications filed through the World Intellectual Property Organization (WIPO), which JLL says "offer an accurate way to measure innovation concurrently across multiple countries and regions." With the notable caveat that PCT applications' countries of origin are based upon the location of the first-named applicant, the report notes dramatic shifts in regional share of PCT applications.

"WIPO has reported a remarkable 670.0 percent growth in worldwide PCT applications over the past two decades, with just shy of 200,000 PCT applications in 2012 and a year-on-year growth rate of 7.1 percent," says the report. "In recent years, Asia surpassed both North America and Europe in the number of overall patent applications, posting 12.2 percent, 4.5 percent and 3.4 percent year-over-year growth, respectively." The growth rate in Latin America and the Caribbean also has jumped, "most recently coming in at 7.0 percent year-over-year, above that of North America and Europe and right on par with the global average," reports JLL.

The numbers from individual nations are more striking when viewed over time. The US, Japan, Germany, China and Korea, in order, lead the way, but their respective shares are shifting:

"After peaking two decades ago, the United States has been progressively losing share of overall PCT applications, dropping from 44.7 percent in 1992 to a new low of 26.4 percent in 2012," says the report. "Conversely, China, Japan and Korea have been assuming that difference, and then some, now enjoying a combined 38.0 percent share of all PCT applications, a remarkable increase from a combined low of 7.2 percent in 1992."

As it happens, those three countries are also the top three when PCT applications are analyzed for their degree of collaboration with scientists from other countries than country of origin. As Erin Bovee, lead researcher for the report, notes, "These countries appear to be seeking self-sufficiency in innovation." 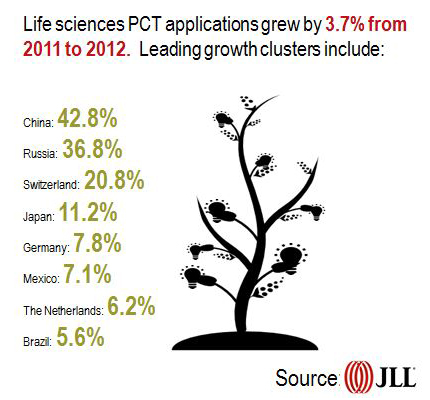 "When increases to developing Asian countries' higher education and R&D workforces are also considered," the PCT analysis concludes, "one can assume these countries are appropriating resources and funds to create highly functional innovative communities."

JLL found that "more than a third of life sciences companies anticipate reducing or consolidating their real estate portfolios in European markets, while 63 percent and 48 percent plan to increase their portfolios in China and Brazil, respectively, and 35 percent in Russia." Meanwhile, as another recent JLL report noted, 22 percent of companies in the sector are fully outsourcing portfolio and facilities management functions, compared to 13 percent in other industries.

"Life sciences companies around the world are using qualified service providers to manage not only building systems, but also laboratory and production equipment, hazardous waste, supply chain and other critical areas like facilities regulatory compliance," said Dr. Lee Elliott, head of EMEA Research for JLL. "We expect facilities outsourcing to continue to extend into highly-regulated spaces that, in the past, were off-limits."

Below is JLL's 2014 ranking of the top 10 US life sciences clusters. The report includes full sub-sections exploring the range of reasons why these 10 and the next 10 (including locations such as Denver, central and southern Florida and Indianapolis) lead the way.

The most intriguing aspect of the JLL report may be Roger Humphrey's "Global Watch List" of 10 cities to keep an eye on for future growth. Some are familiar and some are not - which may drive company researchers to start doing their own data dives:

"Home of the Tsukuba Science City, which [comprises] dozens of national research institutes and hundreds of private research facilities. The city is applying for 'Strategic Global Innovation Center' status to secure tax benefits for small and medium sized businesses, infrastructure development and training for overseas personnel."

"Among the major Canadian cities with active life sciences industries, Vancouver has the greatest share of R&D jobs and tends to feature more start-ups and small to medium-sized companies, as opposed to large pharmaceutical campuses."