Meet Me in St. Louis

A German agricultural science leader plants its flag in the US Midwest. 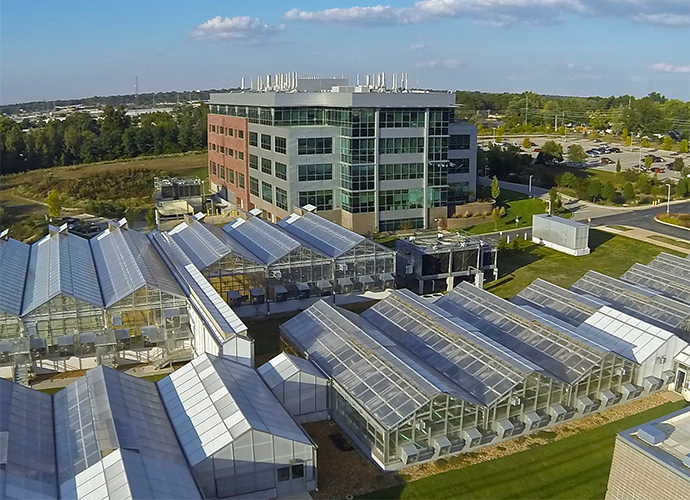 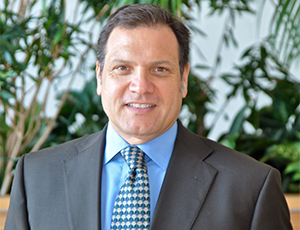 Sam Fiorello, president of BRDG Park and COO of the Danforth Center

It’s no joke: As the 150-year-old Germany company looks to improve its worldwide plant research portfolio, one of the qualities it favors among its employees is "creative lateral thinking.”

The company has found a good match for that type of thinking in St. Louis, Mo., where Léon Broers, KWS Member of the Executive Board responsible for research and breeding, announced on Monday the company will locate its North American research facility, the Gateway Research Center, at BioResearch and Development Growth (BRDG) Park, on the campus of the Donald Danforth Plant Science Center.

Where else did the company consider? About 15 or so places, whittled down to three finalists that included California’s Bay Area and North Carolina’s Research Triangle Park (RTP).

"It’s a third-party, smart money validation of our value proposition,” says Sam Fiorello, president of BRDG Park and COO of the Danforth Center. "We can go on and on about why it’s a smart move, but when a company with over 4,000 employees that’s been around over 100 years does it, it’s not just to be nice guys or because they like toasted ravioli.”

(Toasted ravioli — more honestly described as breaded, deep-fried ravioli — is a hybrid appetizer of sorts with historical links to restaurants in the city’s Italian neighborhood known as The Hill.)

Founded in Klein Wanzleben, Germany, and now headquartered in Einbeck, KWS now boasts more than 4,400 employees in 70 countries, who helped generate net sales of over €1.1 billion (nearly US$1.5 billion) in fiscal 2012/13.. Main areas of its work are the breeding of varieties and the production and sale of seed for corn, sugar beet, cereals, potatoes, oil-seed rape and sunflower. Thirteen percent of its annual sales are invested in R&D ($180 million in FY 2012/2013), and the new employees in St. Louis will add to an R&D payroll of more than 1,800 worldwide, who help provide farmers with almost 300 new, higher-yielding market approvals every year.

In an interview, Robert Heidhues, head of R&D Controlling for KWS, says his seven-person site selection team was advised by Cresa during a process that began with a long list, put five locations under the microscope, then eliminated two before on-site evaluations in St. Louis, the Bay Area and RTP.

"Scientific expertise available was the top criterion," he says. BRDG Park also scored points over RTP in providing a facility and amenities conducive to immediate move-in. "Danforth Center has an excellent package," he says. 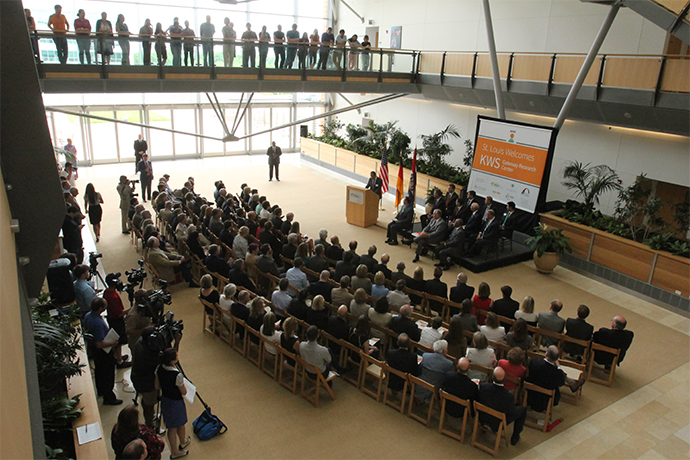 A central location was also advantageous for fostering connections with other locations around the country (including a KWS office in Minneapolis), not to mention two hours closer in time zones than California to the company's German headquarters. "It’s a little bit harder with nine hours difference than with six or seven," says Heidhues.

It's also more affordable in St. Louis, as the company now begins its nationwide and worldwide search for talent.

"For someone just finishing a Ph.D out of university, San Francisco is probably the place to go," Heidhues says, "but if you look at cost of living and look at people further along in their careers — with a house, a family and commuting — cost of living then adds to the attractiveness."

St. Louis is known for its concentration of plant scientists. It's also home to the headquarters of Monsanto, which happens to be leasing a floor at BRDG Park too. Heidhues says attitude toward genetically modified organisms (GMO) was a site selection criterion. KWS has co-developed a Roundup-ready sugarbeet with Monsanto as well as licensed some corn varieties with the company. But Heidhues is quick to point out that his company's "decision has been made independent of Monsanto being here or not being here."

Room to accommodate further growth and proximity to agricultural production were also on KWS's criteria matrix.

"With the establishment of the KWS Gateway Research Center we are now present in two of the world’s prime locations for plant research — USA and Germany."
— Léon Broers, KWS Member of the Executive Board, in announcing the company's new St. Louis investment on June 16

A variety of state and local incentives were offered to assist KWS in establishing its North American facility, including Missouri Works and Missouri Works Training for creating new jobs and for eligible training costs, tenant improvement funds that can be applied to the build-out of their space at BRDG Park, and tax abatement.

KWS is working through the design process to customize a significant portion of the BRDG Park’s Building One, which held its grand opening five years ago to the day when KWS made its announcement this week. The company will build a team of at least 75 research and administrative personnel over the next five years, through a combination of relocation from its headquarters in Germany and hiring of new employees. Heidhues says one KWS researcher already has been happily reconnected with former research colleagues in St. Louis, and meetings with area universities are taking place this week.

"There will be a few people coming from Germany, but it will be very limited, just to get the interaction started," he says. "Our main goal is to recruit here in the US."

Long-term additional growth opportunities for further expansion are planned. In addition to the lab and office space that KWS will lease at BRDG Park, plans call for a significant investment in a dedicated greenhouse complex adjacent to Building One, In the interim, the company will take advantage of the ability to lease research-grade plant growth space at the Danforth Plant Science Center. In addition to providing world-class wet laboratories, office space and a prominent incubator, BRDG Park’s location on the Danforth Center’s campus facilitates access to the intellectual capital of top scientists, as well as to greenhouse, growth chambers, microscopy and proteomics facilities and other vital resources. 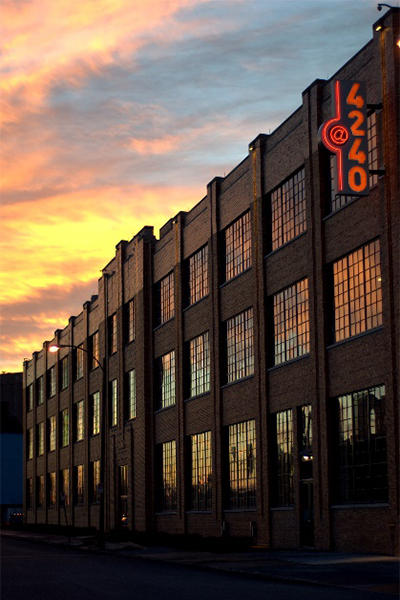 In addition to its work at the Danforth Plant Science Center, Wexford Science & Technology also has worked with the Cortex Innovation Community in St. Louis. Wexford and the design-construction team of HOK and Tarlton Corp. announced last week that the $73-million @4240 lab and research facility at Cortex was just certified as LEED-Platinum by the US Green Building Council.
Photo courtesy of Wexford.

Fostering that infrastructure and science has been a years-long exercise in lateral collaboration involving such organizations as BRDG Park developer Wexford Science + Technology, a BioMed Realty company; the St. Louis Regional Chamber; BioSTL; and the Missouri Partnership.

"The region’s reputation for having a critical mass of plant scientists, a trained workforce to provide skilled ‘hands at the bench,' and convenient access to vital core facilities at the Danforth Plant Science Center made St. Louis an attractive place for KWS to establish its North American facility,” said Fiorello. "However, the thing that helped us rise to the top in this very competitive selection process, in my opinion, was our ability to show that St. Louis’ many outstanding civic, corporate and academic institutions know how to work together to create a region in which the collection of these assets is greater than the sum of its parts. The KWS folks told us that this ability to come together to highlight our community as a great place to live, work and play, really did set us apart.”

Heidhues of KWS confirms Fiorello's opinion, noting in particular a visit to Einbeck by the St. Louis team, and the comprehensiveness of that team's composition: "You could address the question anywhere, and it got taken care of," he says. "RTP also has an excellent track record, but St. Louis is special in what they have built up here. The support of the people at the end made the difference. The feel of commitment, and going the extra mile, was part of the decision at the end."

Fiorello says when the park laid out its aspirations five years ago, the plan was based on research, resources and relationships, with that final "R" being the most difficult to measure but potentially packing the most punch.

"We aspire to be in the hub of a global network of people who care about plant science," he says. Helping to achieve that goal is another venture launched five years ago: an agricultural innovation showcase that last year attracted 150 business plans from around the world, as the park brings together innovators and venture capitalists for an invitation-only gathering that Fiorello says "has become a premier event in the ag innovation space."

"St. Louis is special in what they have built up here ... The feel of commitment, and going the extra mile, was part of the decision at the end."
— Robert Heidhues, head of R&D Controlling, KWS

On the very same day as the KWS announcement in St. Louis, Wexford officially opened its $75-milliion 525@vine building, a former tobacco factory that is already 74 percent leased, at the Winston-Salem site, where Wexford has invested $250 million overall.

Fiorello in St. Louis says unlike many biomedical parks, his park's focus on agricultural technology is relatively rare, which helps it stand out for the right sort of project. "I'm not trying to out-Boston Boston," he says.

BRDG Park is now home to 17 enterprises, with a 50/50 mix between homegrown firms and those from other parts of the world, including India, China, Israel, Boston and even Keokuk, Iowa, just up the Mississippi River.

Like the plants those researchers study, that sort of mix offers a powerful likelihood for robust growth.

"That’s what we had hoped for," says Fiorello. "Helping advance technologies, and be a beacon for technologies in the space from around the world." 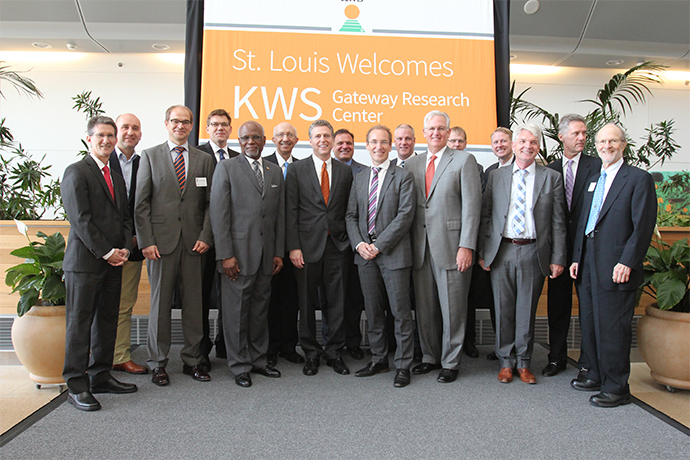