A tripling of headcount in the Southeast Asian city-state
will help AbbVie keep up with its tripled pipeline.

How could a biopharma company that's only one year old employ 21,000 worldwide and have $18.8 billion in revenues?

When it's the one-year-old spinoff of 126-year-old Abbott, that's how.

AbbVie is celebrating its youth with a growth spurt: The company will invest US$320 million to establish operations in Singapore for small molecule and biologics active drug substance manufacturing. The completed facility will provide manufacturing capacity for emerging compounds within AbbVie's oncology and immunology pipeline to serve markets globally.

The investment will establish the first manufacturing presence in Asia by AbbVie, the company announced in a Feb. 5 press release. Other AbbVie operations in Asia include R&D functions in Tokyo and Shanghai, as well as commercial operations throughout the region. AbbVie's existing presence in Singapore includes 120 personnel, supporting commercial operations, global R&D and general operations. The investment is expected to result in additional headcount of more than 250 new employees. AbbVie anticipates the new facility will be fully operational by 2019.

"As Asia's fastest-growing bio-cluster, Singapore is an ideal location to expand our manufacturing network while maintaining rigorous standards of quality and delivery for the patients we serve around the world," said Azita Saleki-Gerhardt, Ph.D., senior vice president, operations, AbbVie. Prior to AbbVie's separation from Abbott, Dr. Saleki-Gerhardt was vice president, pharmaceuticals, manufacturing and supply. "Our presence in Singapore will help assure geographic balance and continuity of product supply as well as increased capacity to deliver on our growing biologics and small molecule product pipeline."

"We are very pleased that Singapore will host AbbVie's first manufacturing facility in Asia," said Kevin Lai, director, biomedical sciences of the Singapore Economic Development Board, noting that the EDB had courted AbbVie and its predecessor for many years. "This investment is a testament of Singapore's strong biologics manufacturing capabilities. To support the continued growth of this sector, Singapore will be investing heavily in human capital development, and new programs will be put in place to train biologics manufacturing talent ahead of demand." 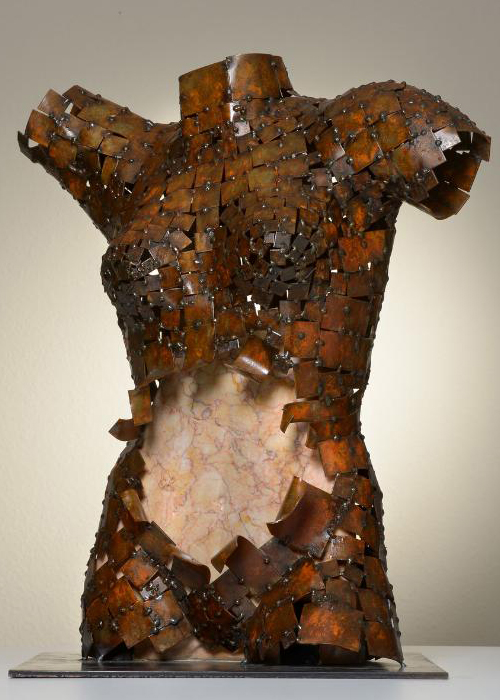 "Coexistentia," a sculpture from Spain that portrays the story of a patient with Crohn's disease, is part of a new traveling art exhibition sponsored by AbbVie that had its debut at the 9th Congress of the European Crohn's and Colitis Organisation (ECCO) in Copenhagen, Denmark. The exhibit is designed to increase understanding of immune-mediated inflammatory diseases (IMIDs), an area of focus for AbbVie.
Photo courtesy of AbbVie

Lai said employment in the biomedical manufacturing sector has grown over the last 13 years from 6,000 to 16,700.

"Singapore is today the home to nine biologics manufacturing facilities, including Abbvie’s investment today," he said. "Over the next three to four years, the burgeoning biologics industry is expected to create an additional 700 to 1,000 jobs in Singapore."

AbbVie is focused on delivering its small molecule and biologics pipeline to address significant unmet medical needs and advance the wellbeing of patients across the following therapeutic areas: immunology, liver disease, oncology, neuroscience and kidney disease.

AbbVie is committed to an agile and collaborative approach to innovation, across its global R&D and manufacturing sites. The company’s scientists rely on proprietary technologies and methods to help them more quickly advance the most promising compounds from laboratory to clinical trials. AbbVie’s research operates with a collaborative model that seeks to build the pipeline of discoveries from inside and outside the company’s own walls.

That sort of spirit may have been one reason why the company was ranked fourth last fall on the list of 2013 Top Employers in the journal "Science," according to a survey of more than 3,000 respondents.