WuXi PharmaTech (Cayman) Inc., a leading pharmaceutical, biotechnology, and medical device research and development (R&D) services company with operations in China and the United States, on May 8 announced that its manufacturing subsidiary, Syn-The-All (STA) Pharmaceuticals Co., Ltd., has begun construction of a new, fully integrated R&D and cGMP manufacturing site in Changzhou, about 110 miles west of Shanghai. WuXi's manufacturing services have quadrupled their revenue in the past four years. The new campus will be constructed in phases and include both research manufacturing and commercial manufacturing facilities. Facilities constructed in phase 1 will double the company's current manufacturing capacity and be operational by the fourth quarter of 2015. Upon completion of the entire phased project, the site will triple current capacity and could employ more than 1,500.

There's nothing like a good old “double Irish." Is it a drink? Is it a wrestling move? This March bulletin from Arnall Golden Gregory explains why Ireland might be the right move for your firm.

Helped in part by an economic assistance package through the Pennsylvania Department of Community and Economic Development, gene therapy firm Spark Therapeutics, a late-stage company spun out of Children's Hospital of Philadelphia last fall, announced last week that it has signed a real estate agreement to open its permanent headquarters in West Philadelphia. The company will invest $50 million and build out a 28,000-sq.-ft. facility on Market Street to house business operations, clinical research and development, and manufacturing. The company hopes to employ up to 50 by year's end. "Philadelphia proper offers everything a rising biotech like Spark could need or want, including access to world-class medical centers and nationally-ranked universities, proximity to biopharma hubs in New York and New Jersey, and a lower cost of living than competing ecosystems in San Francisco and Boston," said Jeffrey D. Marrazzo, co-founder, president and CEO of Spark.

Purdue University’s Board of Trustees on May 16 approved moving forward on several projects that will advance the university's Purdue Moves initiatives, including approval to plan, finance, construct and award construction contracts for three engineering research facilities; and approval to plan an agronomy center laboratory. The College of Engineering projects will invest up to a total of $76.2 million in the college's strategic growth plan. Approved proposals call for construction of a flexible research lab facility, an addition to biomedical engineering's Martin Jischke Hall and construction of a new building to add additional research capacity to the Zucrow High Pressure Lab. "These facilities will play a key role in helping us reach our strategic growth plan goals and realize the vision spelled out in Purdue Moves," said Leah Jamieson, John A. Edwardson Dean of Engineering. "Key components of that vision are the hiring of more than 100 new faculty and expansion of our research opportunities. State-of-the-art research facilities are critical to reaching those goals." 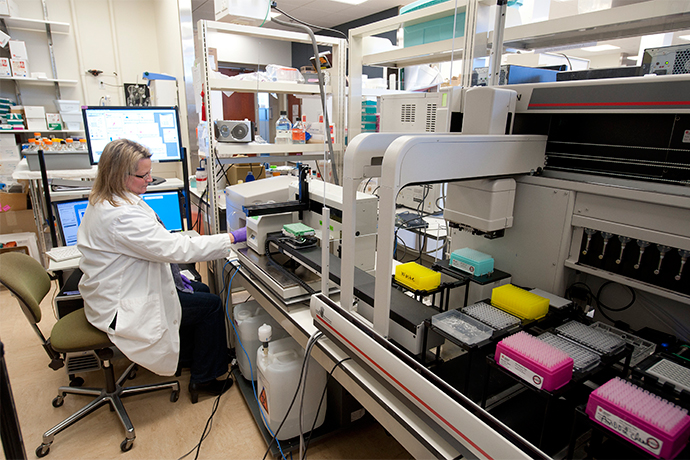 A bioscience lab at Purdue University.
Photo courtesy of Purdue

Biofuels Digest last week named Eastman Business Park in Rochester, N.Y., as the top industrial site in the US for biomaterials. “Eastman Business Park has a comprehensive suite of test, validation, prototyping and pilot manufacturing tools that are specifically designed to help accelerate innovation beyond the lab from prototyping and proof of concept into commercialization,” the publication said, noting the presence of the park’s forthcoming $25-million Bioscience Manufacturing Center (rendering below) as a factor. The park is home to 50 companies, including Cerion Energy and Naturally Scientific. Gov. Andrew Cuomo in February committed $3 million to the park’s development. 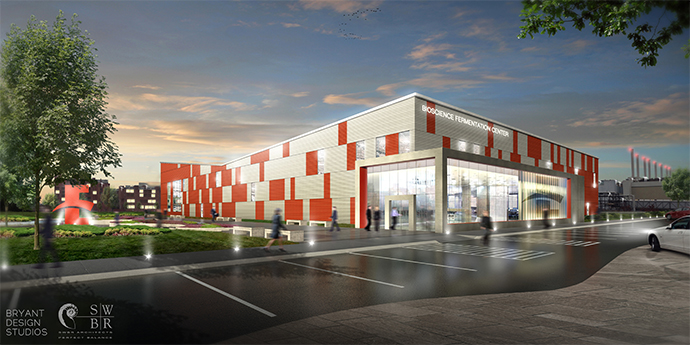 Stemtech International, The Stem Cell Nutrition Company®, announced in March it was relocating and expanding its global corporate headquarters and manufacturing/R&D laboratory from San Clemente, Calif., to Pembroke Pines, Fla. in Greater Fort Lauderdale. “Officials from the company and its location advisory consultants ADP worked closely with Enterprise Florida, the City of Pembroke Pines and the Greater Fort Lauderdale Alliance CEO Council to craft state and local incentives that will result in the addition of 90 new jobs at an average salary of approximately $66,849, along with providing $1.35 million in capital investment” for the project and a separate manufacturing/R&D space, said the Greater Fort Lauderdale Alliance. The announcement noted that the project’s confidential code name “Project 502” was chosen by Stemtech President and CEO Ray Carter, Jr. based on Chief Executive Magazine’s 2013 Annual Survey of CEOs for “Best/Worst State for Business” that ranked California No. 50 and Florida No. 2. Cresa announced this month it had advised the landlord on the move.

Clinical research organization Databean was among several life sciences firms receiving recognition at the Westchester County Association’s Health Tech ’14 conference early this month in Tarrytown, N.Y. Databean will receive a $10,000 cash grant and a spot in the WCA’s BLUEPRINT Accelerator Network, through which it will receive one year of rent-free private office space, complimentary professional services, advertising in local media, and access to financing and mentoring in Westchester County. As a first runner-up, Amrita Health Foods, a producer of plant-based nutrition bars, also will join the Accelerator Network.

CBRE Group, Inc. and its wholly-owned, commercial real estate development and investment subsidiary, Trammell Crow Co., in April were named the No. 1 development company in Modern Healthcare Magazine’s 2014 Design and Construction Survey. In 2013, CBRE and Trammell Crow were responsible for $1.5 billion in completed healthcare assignments. CBRE’s overall volume was enhanced by its acquisition of the KLMK Group, LLC (now CBRE Healthcare) last year, which also bolstered its facility activation services. Among its active projects is an expansion at Akron Children’s Hospital, which in early April celebrated the topping out (picture below) of a new 368,735-sq.-ft., seven-story medical tower two months ahead of schedule. The project is part of an overall $200-million campus expansion. 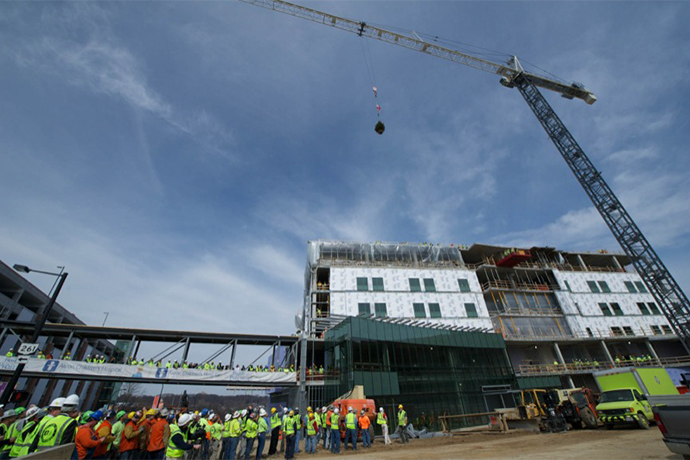 Executives from such companies as Sanofi-Aventis, Roche, Merck and AstraZeneca will be in attendance in July at the 11th Annual Anti-Infectives Partnering & Deal-Making Conference in Boston, Mass.