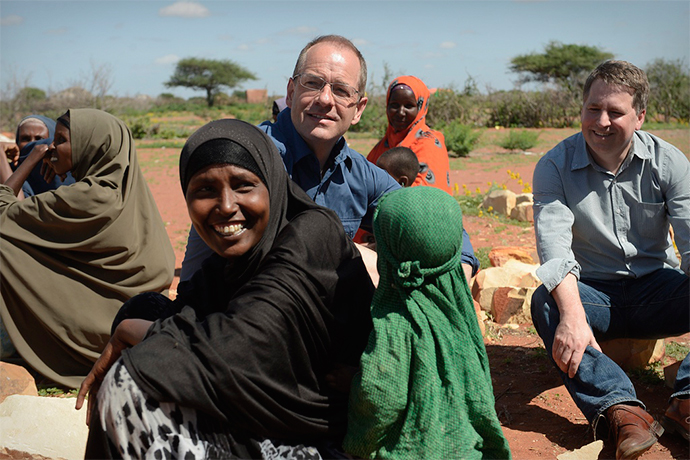 Save the Children CEO Justin Forsyth (glasses) and GSK CEO Andrew Witty (right) recently visited Wajir, in northeast Kenya, to launch a unique new partnership between the global children's charity and GSK to help save 1 million children's lives.  GSK’s new investment plan in sub-Saharan Africa, which aims to add 500 new jobs to the company’s current base of 1,500 employees in the region, will help put food in those children’s mouths.
Photo copyright Sven Torfinn/Save the Children courtesy of GSK
by ADAM BRUNS

A global pharma giant is looking to supplement its huge philanthropic and humanitarian efforts with some straightforward corporate facility and talent investment.

GSK will make targeted investments of up to £130 million (US$218 million) in Africa over the next five years, creating at least 500 jobs while also contributing to the development of home-grown capabilities and skills. GSK’s existing business base in sub-Saharan Africa currently employs around 1,500 people in over 40 countries, including at three existing local manufacturing sites in Kenya, Nigeria and South Africa.

“Today, we are setting out further steps to tackle Africa’s dual health burden of infectious and emerging non-communicable diseases and help build crucial capacity to underpin the development of the healthcare sector in the region,” said Witty. “With global attention focused on how we support development beyond 2015, now is the moment for business to play a more active role in contributing to a more prosperous future in Africa, investing in infrastructure, building skills and capability to unlock human potential and create jobs. Our long-term goal is to equip Africa to discover, develop and produce the medicines required for Africa.”

“There is a noticeable divide between FDI trends in North Africa versus Sub Saharan Africa (SSA),” says the report. “While FDI projects in North Africa declined by nearly 30 percent [from 2012 to 2013], projects in SSA increased by 4.7 percent, reversing the decline of 2012. This further widened the gap between the two sub regions, with SSA’s share of FDI projects exceeding 80 percent for the first time.”

At the city level, in SSA, half of the respondents to EY’s survey cite Johannesburg as the most attractive city in which to do business, ahead of Cape Town. Nairobi and Lagos are ranked as third and fourth most attractive cities, respectively.

EY said there was significant movement in the list of top 10 countries by FDI projects in 2013. Only South Africa and Nigeria retained their first and third positions from 2012 with 142 projects and 58 projects, respectively. However, FDI projects in both these countries witnessed a slight decline. “Countries such as Kenya with 68 projects, Ghana with 58 and Mozambique with 33 all moved up the ranks,” says the report. Zambia and Uganda were the new entrants in the top 10 list in 2013 with 25 and 21 projects respectively.”

Africa’s perceived attractiveness relative to other regions has improved dramatically over the past few years, said EY. The overall survey results show that Africa has moved from third last position in 2011, to become the second-most attractive investment destination in the world, behind North America.

The UK, whence GSK hails, was the leading country of origin for FDI projects into Africa in 2013 with 104 projects.

As part of its Africa strategy, GSK says it will invest £25 million (US$42 million) to create the world’s first R&D Open Lab for non-communicable diseases (NCDs) in Africa. But the company hasn’t yet mentioned a specific location.

The new lab will build “on the success of GSK’s Open Lab in Tres Cantos, Spain, which gives independent researchers access to GSK facilities, resources and knowledge to help them advance their own research projects into diseases of the developing world such as malaria, tuberculosis and leishmaniasis,” said the company.

The open lab will directly support the training and education of African scientific researchers who will participate in a portfolio of projects, building local expertise, creating a new generation of African NCD experts “while instilling a deep vein of ‘African thinking’ within GSK’s own R&D organization,” said the company.

Over the next five years, GSK will look to partner with a number of African countries to develop domestic manufacturing capacity and capability. This will see GSK invest up to £100 million (US$168 million) to expand its existing manufacturing capability in Nigeria and Kenya and build up to five new factories in Africa. GSK said it is “currently reviewing possible locations in countries including Rwanda, Ghana and Ethiopia, and the selected sites will be announced in due course and subject to government agreement.”

“Now is the moment for business to play a more active role in contributing to a more prosperous future in Africa, investing in infrastructure, building skills and capability to unlock human potential and create jobs.”
— GlaxoSmithKline CEO Andrew Witty, speaking March 31 at the fifth EU-Africa Business Forum in Brussels

The new GSK facilities will make locally relevant products such as antibiotics and respiratory and HIV medicines (on behalf of ViiV Healthcare), says GSK. The initial focus will be on secondary manufacture with the aim to transfer the technology, skills and knowledge needed to enable the local manufacture of more complex products over time.

To support the scale-up of domestic manufacturing and supply, GSK will establish up to 25 academic chairs at local African universities in related areas such as pharmaceutical sciences, public health, engineering and logistics. These roles will facilitate the development of new courses as well as internships and student exchanges, “and will be pivotal to ensuring manufacturing capability is locked into the continent to help attract further manufacturing investment,” said GSK.

GSK is also taking steps to improve and simplify its supply chain with the creation of regional supply hubs that will help to reduce stock shortages and local supply partnerships to enable more GSK products and medicines to reach under-served rural communities in Africa. These steps will help reduce Africa’s reliance on imported medicines, improving the security of supply and reducing production costs and transportation, which in time should help contribute to lower prices.

GSK will also increase its support for community health worker training, in recognition of the vital role they play in delivering basic healthcare to many communities. GSK is already supporting the training of 15,000 healthcare workers with its NGO partners by the end of 2014. GSK’s commitment to healthcare worker training will now be expanded to include low- and middle-income countries in sub-Saharan Africa. Over the next three years, GSK will partner with charities to help train and upskill 10,000 community healthcare workers across Kenya, Ghana and Nigeria under the umbrella of the One Million Community Health Worker campaign, a UN-led initiative directed by Professor Jeffrey Sachs.

The changes build on steps taken by GSK over the past six years to modernize its business model and help improve access to medicines in developing countries. This has seen the company cap the prices of its patented medicines at no more than 25 percent of developed world prices and reinvest 20 percent of any profit made back into training healthcare workers in the world’s poorest countries and pursue open innovation models for diseases of the developing world.

CARE USA, the World Affairs Council of Atlanta and the Washington- based Center for Strategic and International Studies (CSIS) today are hosting a daylong summit entitled "Health in Africa: The Unfinished Agenda," featuring the former prime minister of Kenya as well as executives from UPS and GE, among others. Click here for the program and live streaming. 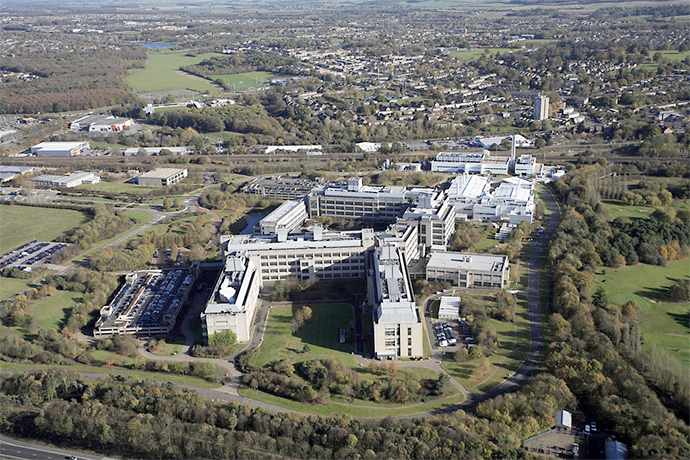 The new R&D Open Lab for non-communicable diseases in Africa will see GSK scientists collaborate with research and scientific centers across Africa from its hub at GSK’s Stevenage R&D facility in Hertfordshire, UK (pictured), to conduct high-quality epidemiological, genetic and interventional research.
Photo courtesy of GSK