Whether the territory is emerging or at the top of the heap, GE's recent investments have it covered. 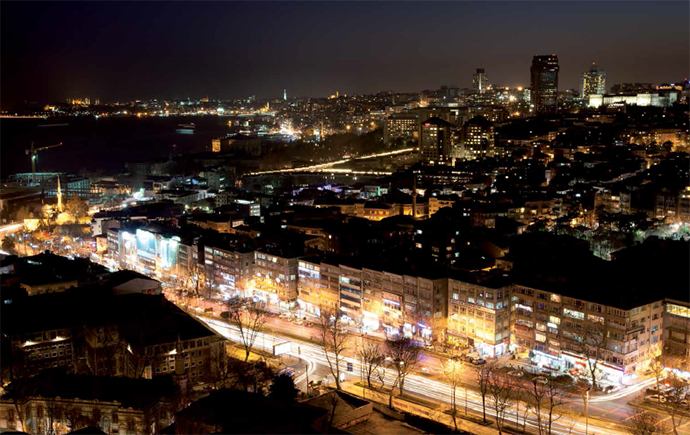 Istanbul is the latest location to join GE's network of biopharmaceutical customer training and technology facilities in the US, UK, China, India and Sweden.
Photo courtesy of GE
by ADAM BRUNS 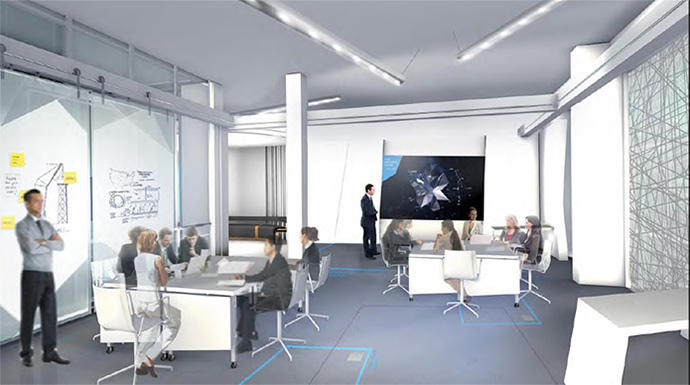 GE's technology and training lab in Istanbul will collaborate with Turkish biopharmaceutical companies and universities, as well as with GE customers from Russia and the Middle East.
Rendering courtesy of GE

Last week, on Nov. 14, GE Healthcare Life Sciences announced it would open a Technology and Training Laboratory to support Turkey's expanding biopharmaceutical and biotechnology industry. Located at GE's Turkey Innovation Center in Istanbul, the laboratory will open to customers, industry and academic partners from mid-2015, adding to GE's network of biopharmaceutical customer training and technology facilities in the US, UK, China, India and Sweden.

The Technology Laboratory will feature the company's latest tools and technologies for drug discovery, protein science, and bioprocessing research. It will offer advanced technical training and technology evaluation to the Turkish biopharmaceutical sector, as well as being open to universities as a location for elements of biotechnology degree courses. "Academics, pharmaceutical and biotechnology researchers will also have access to the laboratory for small-scale research studies using the latest GE equipment, as will GE customers from the Middle East and Russia," said the company.

The center will have a strong focus on the Future of Work, with an Advanced Manufacturing lab, an in-depth look at the Industrial Internet, a dedicated Life Sciences Technology and Training lab, and content and resources to connect people around the globe.

GE Healthcare Life Sciences' $4-billion business has more than 11,500 employees in over 100 countries. GE leaders in October pointed to their health and life sciences business as a key driver for the company, beginning with biopharmaceuticals, a $100-billion class of drugs that is the fastest growing in the world. The company, which already makes technologies that help companies "pull the right strands out of the protein soup" in bioreactors, in March completed the $1-billion acquisition of three businesses from Thermo Fisher Scientific that will aid GE in growing the upstream part of that business. Nigel Darby, vice president of biotechnologies and chief technology officer at GE Healthcare Life Sciences, said because of the chemical and structural complexity involved with making biopharmaceuticals, "you need to invest a lot of effort in manufacturing."

"Traditionally, we've been absent from that upstream part of the market," Darby said in the spring. "But over the last six years we've acquired a number of companies that work in bioreactor technology and cell culture. If you get everything right, offering the upstream and the downstream from a single technology portfolio will enable our customers to get their drugs to the patient in a quicker and more cost effective manner."

He also pointed to the global nature of biopharma: "If you look today, some of the biggest sources of growth we see both in use and manufacturing of pharmaceuticals and vaccines is in places like India, Korea, and China," Darby said. "There is a lot of vibrancy in terms of demand for these products from the growth markets. This correlates with the best growth opportunities."

It's not just about protein soup in those markets. Among GE's other life sciences investments tracked in 2014 by Site Selection's New Plant Database is a $100-million project in Tianjin, China, for the manufacture of magnetic resonance imaging (MRI) equipment. Located in Tianjin Airport Economic Zone, the 200,000-sq.-m. (2.1-million-sq.-ft.) project is the largest medical equipment production base of GE in the world, and will also produce CT scanning and X-ray equipment. It's GE Medical's fifth manufacturing complex in China.

Scheduled to open in spring 2015, the project will establish a new site for more than 500 GE Healthcare Life Sciences employees, including the creation of more than 220 new jobs in what is universally regarded as the leading life sciences and biotech cluster in the nation. "The facility will consolidate GE Healthcare Life Sciences' US East Coast presence, bringing together a critical mass of talent and expertise-dedicated collaboration, innovation and leadership in the industry," said GE.

"Our new facility in Massachusetts will position us for continued innovation and competition in such a fast-paced, innovative industry," said Kieran Murphy, president and CEO of GE Healthcare Life Sciences. "We will be close to industry-leading talent, customers, and world-class academic and medical institutions across all the industry sectors we serve, from biotech and pharma, to diagnostics and medical devices."

The investment will transform a currently unoccupied space into labs, customer application facilities, and office space to complement GE Healthcare Life Sciences' existing manufacturing capability in Westborough, Mass. The space in a former Hewlett-Packard building in Marlborough Hills is adjacent to space occupied by Quest Diagnostics, which opened its own new $80-million, 200,000-sq.-ft. (18,580-sq.-m.) "Lab of the Future" in Marlborough in early October. 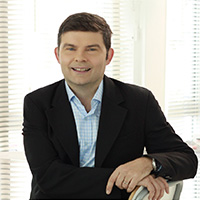 When fully operational, the facility is expected to employ 1,350 health care professionals - 100 more than originally projected by the company in 2013 when it announced plans to establish a major laboratory in Marlborough to serve New England.

The innovation at GE, meanwhile, is not limited to drugs and equipment. The company's bioprocess facility designs are also gaining global recognition.

In late October, at a ceremony in Boston, Gallus BioPharmaceuticals, a contract development and manufacturing organization (CDMO), and GE Healthcare Life Sciences were recognized for the successful design and construction of an advanced single-use biomanufacturing facility as winners of the BioProcess International (BPI) Award for Excellence in Facility Design and/or Retrofit. (Gallus was recently acquired by DPx Holdings B.V. and now operates under the Patheon business unit.)

"Utilizing GE Healthcare's FlexFactory™, a flexible single-use biomanufacturing platform, enabled Gallus to expand its offering to include a 'virtual ownership' model in addition to the traditional pay-per-run approach," said a release from St. Louis-based Gallus, which also operates a facility in Princeton, N.J. "Virtual ownership gives clients control of dedicated capacity without the outlay of traditional capital investment, as well as the ability to access capacity as needed. During the build, existing office space was stripped back to a shell then converted into a cleanroom environment, including airflow and drainage, into which elements of the FlexFactory platform were installed. Following validation, a total of 23 successful early-phase product bioreactor runs have now been completed for multiple clients over the last 18 months."

"The FlexFactory is an important part of our growing business, providing customers with rapid supply of their GMP biotherapeutics," said Mark W. Bell, chief manufacturing officer of the legacy Gallus business. "Fast turn-around with a scalable technology from 50L to 2000L built on an integrated platform that includes an all-in-one suite approach to media, buffer, bioreactor and purification technologies is a first for our industry. The customer demand has been so strong that we are already expanding our original FlexFactory capacity."

GE Healthcare was also a finalist in three other categories at the BioProcess International award ceremony, including "Excellence in Leadership" recognition for Olivier Loeillot, general manager, Enterprise Solutions and Commercial BioProcess, Asia, for GE Healthcare, who has led the introduction of modular and flexible manufacturing facilities to the industry, including the KUBio concept, an off-the-shelf, modular factory that made its debut in 2012 with a total planning, delivery and construction time of 14-18 months.

"With KUBio our customers will be able to cut months off the typical construction time, and greatly streamline the whole construction process," said Loeillot then. "We're already seeing interest from a wide range of customers, from governments wanting to develop in-country manufacturing capability right through to pharmaceutical companies wanting to expand production capacity in new locations. KUBio is an industry game-changer that will help them do just that."

GE Healthcare spokesperson Val Jones says the number of KUBio units sold is not available. In terms of publicly available information, JHL Biotech purchased one in Sept. 2013 for its site at Biolake Science Park in Wuhan, China.

"Our aim is to support the biopharmaceutical industry in its efforts to tackle some of the world's most challenging diseases, helping reduce costs and improve efficiency from early-stage research through to full-scale manufacturing," said Darby of the BPI nominations in early October. "Receiving four nominations is testament to the breadth and significance of our contribution. Not only do we have outstanding leadership and innovative technologies in the space, but we also have collaborations with our customers that are pushing the boundaries of what the industry can achieve." 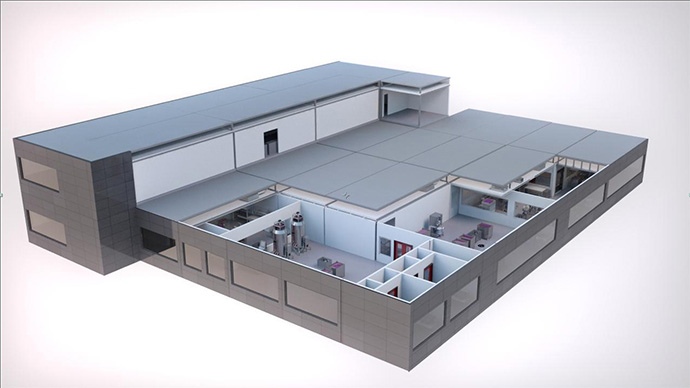 GE'S KUBio is an off-the-shelf, modular factory that made its debut in 2012 with a total planning, delivery and construction time of 14-18 months.
Rendering courtesy of GE