Checkup of the Seas

The third annual Ocean Health Index ranks 220 areas on criteria at the core of planetary life.

The humpback whale was one of 35 iconic Antarctica species assessed for the 2014 Ocean Health Index.
Photo by Levi S. Norton courtesy of UCSB
by ADAM BRUNS 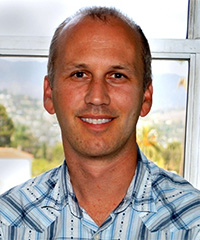 UCSB's Ben Halpern is a professor at UCSB’s Bren School of Environmental Science and Management and an associate at the National Center for Ecological Analysis and Synthesis.
Photo by James Badham courtesy of UCSB

The most comprehensive assessment conducted by the Ocean Health Index rates the Earth’s oceans at 67 out of 100 in overall health. In addition, for the first time, the report assessed the Antarctic and the 15 ocean regions beyond national jurisdiction (high-seas areas) — all critical regions for maintaining a healthy climate, safeguarding biodiversity and providing sustainable food sources.

Together with the 220 exclusive economic zones (EEZs) measured in 2012 and 2013, the index — a partnership led by scientists from UC Santa Barbara’s National Center for Ecological Analysis and Synthesis (NCEAS) and Conservation International (CI) — now measures all of the oceans on planet Earth. The overall score for global EEZ, accounting for modification and updates of data and methods, was 67 in the first two years and 68 in 2014.

“During our first two years, we were able to show the health of the oceans within 200 nautical miles of coastlines, but it was like doing a jigsaw puzzle where you put the edges together first,” said Ben Halpern, professor at UCSB’s Bren School of Environmental Science and Management and an NCEAS associate. “Filling in the rest of the puzzle with Antarctica and the high seas completes the picture and is a major step toward better understanding the state of our entire oceans.”

The Antarctic and Southern Ocean scored well in such categories as Coastal Protection (99 out of 100), Clean Water (100) Biodiversity (94) and even Economies and Livelihoods but not so well (as might be expected) in Natural Products (29) and Food Production (55).

“Antarctica and the Southern Ocean are protected by distance from many of the threats caused by human populations, such as chemicals, excessive nutrients, and pathogens and trash,” said Greg Stone, chief scientist and executive vice president of the Moore Center for Science and Oceans at Conservation International.

“The score of 100 that is set as a target for each goal reflects a status that is feasible to achieve and can sustainably produce maximum benefits now and in the future,” said Steve Katona, managing director for the Ocean Health Index.

The Western Indian Ocean and Eastern Central Atlantic Ocean scored highest overall at 79 and the Northwestern Pacific Ocean scored lowest at 53. The Eastern Central Atlantic Ocean had a Fisheries score of 81 out of 100, followed by the Western Indian Ocean with 80, making them the highest-scoring sectors for fisheries. At 7, the Northwestern Pacific Ocean had the lowest Fisheries score because, among other things, its stocks were farthest from the biomass that provides maximum sustainable yield.

In addition to this third global update of the Ocean Health Index, two regional assessments were issued this year: one that evaluated ocean health of Brazil’s 17 coastal states and a second measuring the health of the United States West Coast. The next global assessment is planned for September 2015.

“Certainly the score of 67 needs to be much higher if the ocean is sustainably to help meet the needs of our rising human population,” noted the Index authors. “Although there is much room for improvement, some people might have expected an even lower score given all the news reports about ocean acidification, oil spills, plastic trash, dead zones, overfishing and others — serious impacts that will become worse if their causes are not reduced or eliminated.

Although not good, the score of 67 does not indicate that the ocean is dying, as some headlines have proclaimed, though some of its parts are severely impacted. There are still many parts of the ocean where impacts are less intense. Sheer distance from human population centers limits pressures on some areas, including portions of the Antarctica and the High Seas. Parts of those areas and others, particularly within EEZs of nations committed to careful planning, are being managed successfully.” 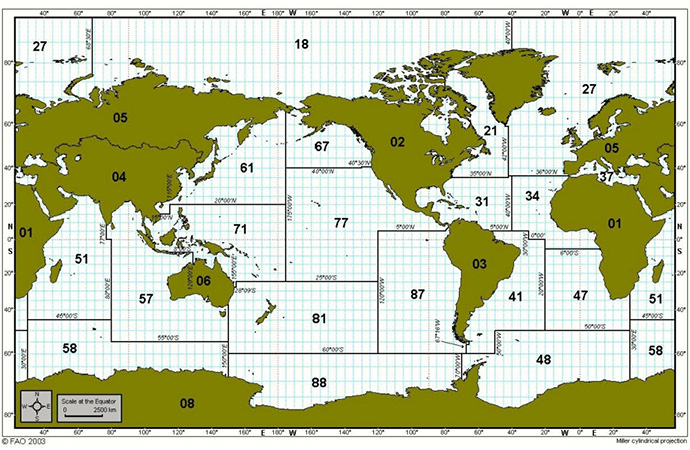 This high seas sector map shows rankings out of 100 for each area of Earth's oceans. The first fully global Ocean Health Index score is 67 out of 100.
Map courtesy of UCSB