Investments in Alabama and Singapore are the latest salvos
from the Illinois-based life sciences giant. 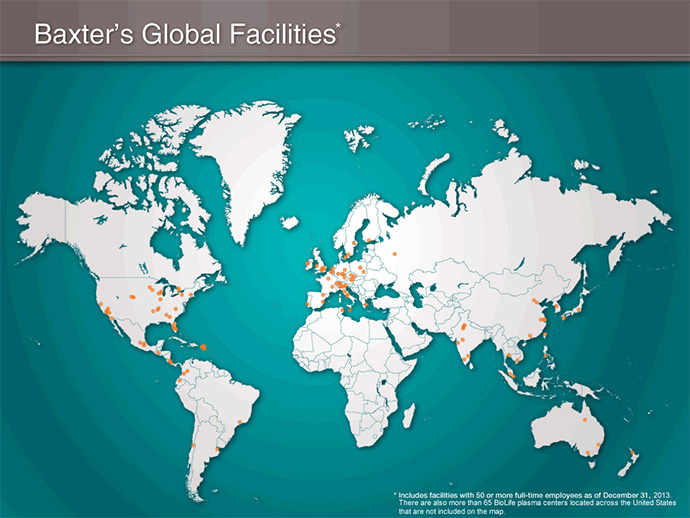 Baxter International’s footprint keeps getting larger. In addition to the dots on this map, which each represent operations employing 50 or more, the company operates 65 BioLife plasma centers across the United States.
Images courtesy of Baxter
by ADAM BRUNS 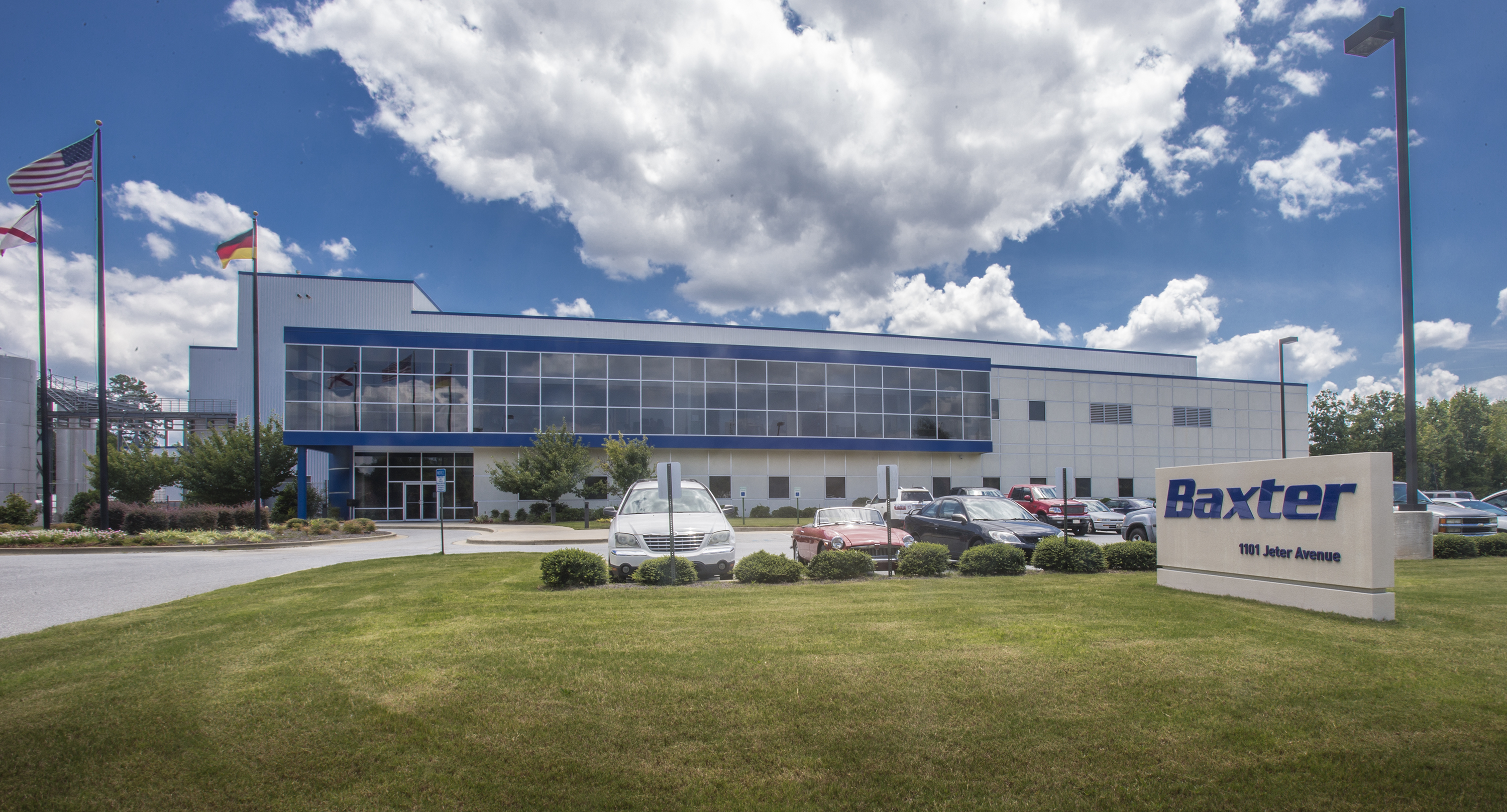 Baxter’s investment in Opelika, Ala., will eventually mean 200 new jobs in addition to the current payroll of 170.

Baxter International Inc. announced in August that it plans to expand its state-of-the-art manufacturing facility in Opelika, Ala., to help address the growing global demand for dialyzers, a critical component used in hemodialysis therapy (HD), a life-sustaining therapy for patients with end-stage renal disease.

Baxter will invest nearly $300 million in the Opelika site to add 230,000 sq. ft. and several production lines. The company currently employs about 170 people at the facility, and anticipates it will begin hiring an additional 200 workers in 2016 to support the expansion.

"In addition to supporting a greater number of patients having access to therapy, the expansion is an investment in the communities where our employees live and work,” said Robert L. Parkinson, Jr., chairman and CEO of Baxter. The collaboration with Governor Robert Bentley, Mayor Gary Fuller and the many other local officials was a key component of our expansion plan."

Currently, there are nearly 2 million patients worldwide with end-stage renal disease (ESRD) receiving HD therapy. A growing population with diabetes, blood pressure issues and other key causes of kidney disease, means the incidence rate of ESRD and the need for dialysis is also growing by an estimated six to seven percent annually around the world, says Baxter. For many patients with ESRD, HD therapy is performed to remove waste and excess fluids from the body by processing their blood through an artificial kidney (the dialyzer). Clean blood is then returned to the body after the filtering process is complete.

Baxter International Inc., through its subsidiaries, develops, manufactures and markets products that save and sustain the lives of people with hemophilia, immune disorders, cancer, infectious diseases, kidney disease, trauma and other chronic and acute medical conditions. Baxter had 2013 sales of $15.3 billion and has approximately 61,500 employees.

While the Opelika area is more well known for its automotive cluster, it’s also home to another life sciences expansion by Pharmavite, which last year announced a $16-million, 54-job expansion. Other life sciences investments in the state since early 2013 include Innovative Health Products’ $12-million, 245-job investment in Russellville and Turner Medical’s $5-million, 25-job investment in its medical devices site in Athens in Limestone County.

Illinois–based Baxter has liked the South ever since it established its second manufacturing plant in Cleveland, Miss., in 1950. Two years ago it revealed that it really liked the South by choosing a site near Covington, Ga., for a new manufacturing complex to support plasma-based treatments. The Opelika site sits about a two-hour drive from the new Georgia location.

“As of June 2014, all electricity, natural gas, water and sewer connections at the site are complete,” says Baxter. “Steel construction, roofs and exteriors of the buildings are also nearly complete. The construction team is currently focusing on mechanical, electrical and plumbing installation in preparation for opening the Central Utilities Building.” There are approximately 1,500 contractors on site on a daily basis.

“The integrated campus includes three main manufacturing components, as well as support components such as warehouse and utilities buildings, administrative facilities and laboratories,” explains Baxter. “The initial phase of development is approximately 1 million total gross sq. ft. The timeline on the project spans several years with commercial production scheduled to begin in 2018.

The Baxter products that will be manufactured at the Covington facility include immunoglobulin therapy for patients with immune deficiencies and albumin products, which are primarily used as plasma-volume replacement therapy in critical care, trauma and burn patients.

Baxter expects capital investments at the site to exceed $1 billion by the time the facility is fully operational in 2018. The project is expected to create a total of 1,500 full-time positions in Georgia and more than 2,000 jobs in total across multiple U.S. locations. “As of June 2014, there are approximately 200 full-time permanent Baxter employees in Covington with a goal of having 300 Baxter employees on-board by the end of the year,” says the company. “Hiring focus for the balance of 2014 will be in Maintenance, Manufacturing, Quality, Quality Control Lab, and Validation.”

Halfway around the world, Baxter announced in early August the formal opening of its first advanced recombinant biologic facility in Singapore, and expansion plans for a new recombinant protein processing suite, which process products for hemophilia A and hemophilia B, respectively. When fully operational, the new suite will be the primary global commercial processing facility for the hemophilia B protein therapy.

The establishment of the facility and new investment will have created 450 biopharmaceutical jobs by 2015 in Singapore. The biologics facility in Singapore currently employs more than 400 production staff.

“Singapore's biotech industry has seen tremendous growth in recent years and Baxter is proud to have been a part of this journey,” said Jean-Luc Butel, corporate vice president and president of Baxter's International operations. “As we have invested in training our employees to support this state-of-the-art technology, we remain committed to partnering with the Singapore Economic Development Board and other government agency partners to elevate the quality of the healthcare workforce in Singapore." 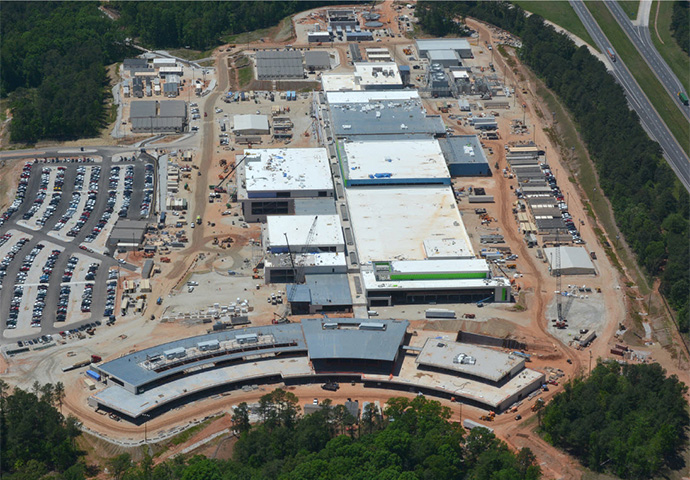