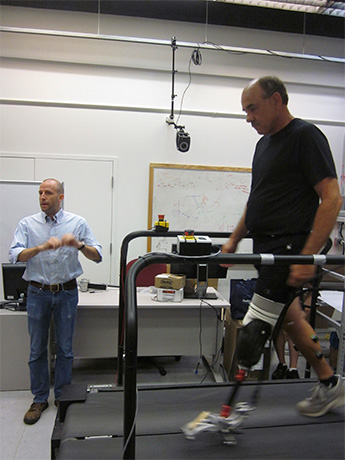 Behind the flashy digs and fast talk of startup founders fully outfitted with jeans, blazers and fabulousness, the new world of innovation continues to take place in the sometimes drab garages and basements of institutions.

Deep in the somewhat outdated hallways of Scaife Hall, the home of Carnegie Mellon University's Dept. of Mechanical Engineering named for the late libertarian billionaire and newspaper publisher Richard Mellon Scaife, Prof. Steve Collins, director of the school's Experimental Biomechatronics Lab, leads a team of researchers doing the hard daily grind of science. That work may soon result in wearable robotic prosthetic and exoskeleton solutions that improve the mobility and the lives of amputees and stroke victims, among others.

Last week they hosted a team of journalists for a treadmill demonstration of a robotic ankle-foot prosthesis emulator system that in its current iteration comprises "(1) powerful off-board motor and control hardware, (2) a flexible tether transmitting mechanical power and sensor signals, and (3) a lightweight instrumented end-effector." 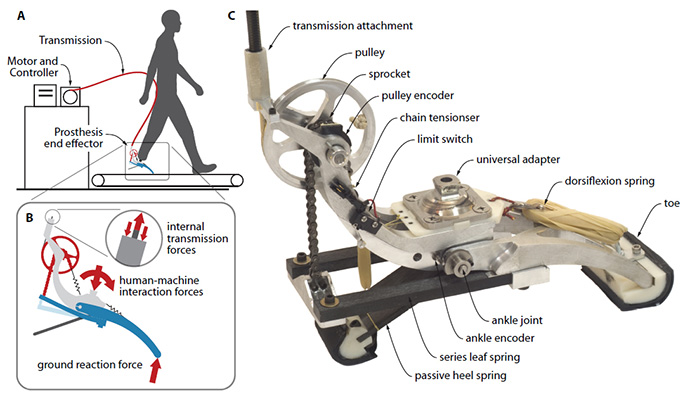 Illustration and schematic by Steve Collins

If you like that kind of talk, you'll like the robotics and mechatronics scene in Pittsburgh, where ideas born at CMU and other institutions are breathing life and energy into formerly moribund neighborhoods at the same time they provide life-saving and life-enhancing solutions. They include RE2, a company that makes robots designed to disarm improvised explosive devices (IEDs) in some of the world's most dangerous places; and the University of Pittsburgh's Human Engineering Research Laboratory (HERL), a partnership among the Veterans Administration, the School of Health and Rehabilitation Sciences at the University of Pittsburgh and UPMC Health Services.

At Scaife Hall, amputee David Straub demonstrates the robotic prosthesis with the assistance of graduate students Josh Caputo (co-developer of the technology with Prof. Collins), Roberto Quesada, and Kirby Ann Witte. The proposed system, says the project plan, "will emulate commercial prostheses across the available spectrum, and provide hard data demonstrating how much gait improvement (e.g. increased speed or reduced energy cost) an individual subject can expect at each level of prosthesis performance and cost." The model being demonstrated has a cost of approximately $100,000 at this point, vs. the $1,000 cost of a normal prosthesis. 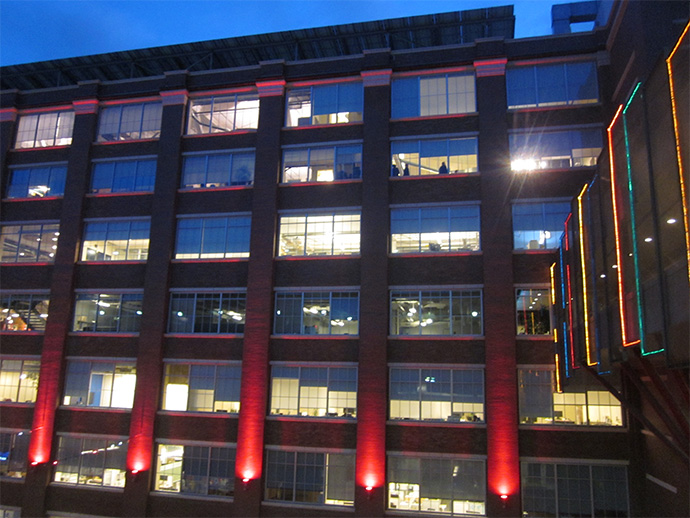 Google is the prize tenant at Bakery Square. But it's not the only innovator on the grounds.

The key to making this work, they say, is weight. Lighter is always better.

"I couldn't walk 10 minutes with a regular [prosthetic] foot, but can walk a lot longer with this," says Straub.

As Prof. Collins explains it, "For each 1 percent of body mass carried at each foot, energy cost increases by 8 percent."

Helping reduce the weight are 3D-printed titanium parts. Additive manufacturing allows the manufacture of uniquely shaped pieces that can't be made with conventional fabrication tools. Layer-by-layer fabrication allows for hollows and for complex shapes. "Anything you put onto a person needs to be flowing, not boxy," explains Ph.D. student Kirby Ann Witte. 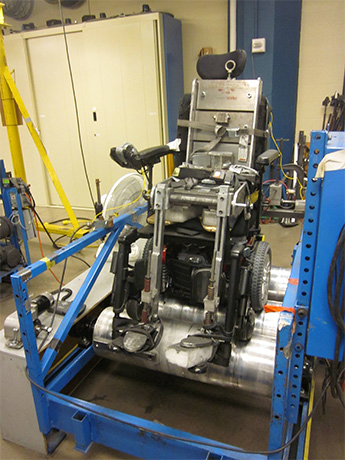 As one of the only independent wheelchair testing facilities in the country, the Human Engineering Research Laboratory HERL) in Pittsburgh is frequently contacted by mobility device manufacturers to perform tests required by regulatory agencies on their products.

The parts, says Collins, "result in assemblies that are about half as heavy as those manufactured using conventional techniques in most cases, and the worn portions of our systems weigh around 1 percent of body weight. This translates to energy savings during walking on the order of 10 percent due to reduced exoskeleton mass."

Collins says most big changes in the field are coming from small, independent companies like this nascent outfit, nurtured in the nests of innovation provided by elite institutions such as Carnegie Mellon, MIT and UC-Berkeley. The prosthesis emulator technology is just at the outset of the technology transfer process at CMU.

A common term in robotics is "degrees of freedom," which describes the technical number of axes in which a robot can operate. The more degrees there are, generally the more flexibility and options are available to the user.

That concept is on full display in the 11,000-sq.-ft. prototyping facility of HERL, located in the basement adjacent to parking lots under the increasingly hip Bakery Square development, on the site of a former Nabisco plant in Pittsburgh’s formerly run-down East Liberty neighborhood, where Google is growing a 500-employee engineering center, one of eight US TechShop locations — a do-it-yourself maker lab — operates across the street, and the award-winning AlphaLab accelerator from Digital Greenhouse successor Innovation Works is just around the corner. 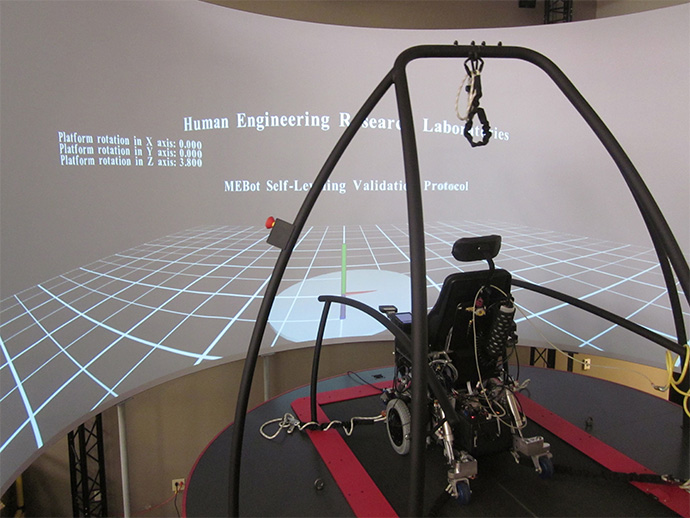 Among the projects under way at HERL is the MeBot, a powered wheelchair that uses air cylinders to move its six wheels up and down to negotiate architectural barriers such as curbs, steep slopes and slippery surfaces.

A machine shop, rapid prototyping, welding shop, painting and finishing shop, stock storage and preparation, testing laboratory, electronics laboratory, and technical computing laboratory support the design, fabrication, and other technical aspects of the rehabilitation and assistive technology research projects under way at HERL, which include innovations in wheelchair athletics. Upstairs a few floors is the UPMC Technology Development Center.

HERL is a national leader in wheelchair design and in development of related products to improve the mobility, comfort and self-sufficiency of the disabled. HERL, which just celebrated its 20th anniversary, is led by Dr. Rory A. Cooper, PhD, FISA & Paralyzed Veterans of America Chair and Distinguished Professor of the Department of Rehabilitation Science and Technology, and professor of Bioengineering, Mechanical Engineering, Physical Medicine & Rehab, and Orthopedic Surgery at the University of Pittsburgh. Dr. Cooper is founding director and VA Senior Research Career Scientist of the VA Rehabilitation Research and Development Center of Excellence in Pittsburgh. He is also the Co-Director of the NSF Quality of Life Technology Engineering Research Center, a joint effort between the University of Pittsburgh and Carnegie Mellon University. 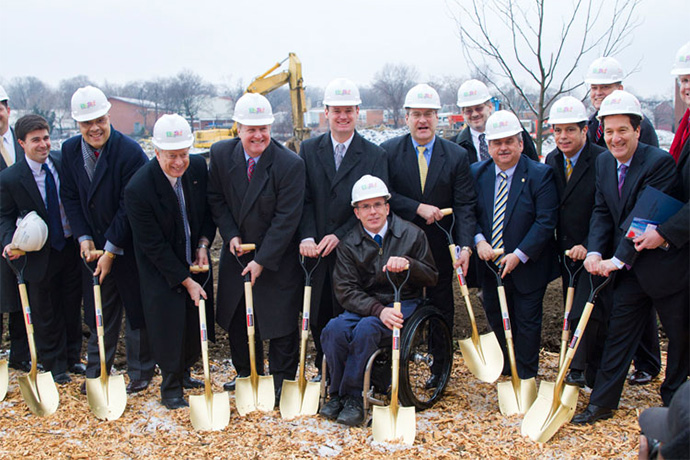 Earlier this summer, in appreciation of Cooper’s work, accomplishments, and most recently the announcement of his 2014 Engelberger Award — the robotics industry’s highest honor — the Pittsburgh City Council proclaimed June 17, 2014, as “Dr. Rory A. Cooper Day.”

He says HERL got started in an old locker room at a VA facility in Pittsburgh. Today it’s grown to 80 people, including 40 staff and faculty, 10 of whom are veterans. They not only continue to support innovation on site, but consult to and often end up leading other programs around the world, including centers in Brazil, Japan, Korea and China. None of them, he says, “tackle training and education and research like we do.” The facility currently supports work backed by five SBIR grants — more than 60 SBIR grants have been awarded to projects at HERL over its 20 years. 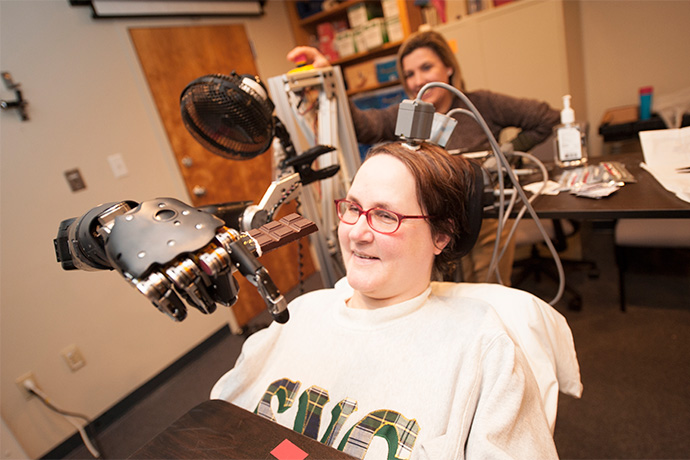 In 2012, quadriplegic Jan Scheuermann, was able to bring a chocolate bar to her mouth using a robot arm with seven degrees of freedom that she guided with her thoughts, thanks to a brain-computer interface technology and training developed in part by researchers at the University of Pittsburgh School of Medicine and UPMC.
Photo courtesy of UPMC

Cooper, who moved to Pittsburgh from California, says he thought he'd be here maybe three years when he arrived in 1994. "But I hit the area at the right time," he says, noting the symbiotic relationships among area foundations, institutions and companies. "Every time somebody tries to recruit me, I can't find anyplace better. We were the first to move into Bakery Square. They wanted to make it an incubator, and I proposed making it a research park."

Looking around a full testing space that includes projects on wheelchair transfer and propulsion and a model kitchen for individuals with traumatic brain injury or other impairments, he says, "Robotics will be part of the future for people with disabilities. One beauty of our area is there's a lot more work than we can possibly tackle."