New research on research illustrates the economic significance of IP protection, among other innovation policy measures.

Regeneron's current annualized R&D spending is in excess of $1 billion, and includes multiple investments in recent years at its HQ and R&D complex in Tarrytown, N.Y. The company in October was named by Science magazine as the No. 1 biopharma employer for the third year in a row.
Photo courtesy of Regeneron
by Adam Bruns
Responsive Table 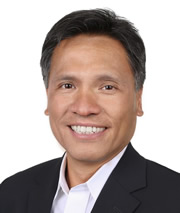 According to a new report sponsored byPharmaceutical Research and Manufacturers of America (PhRMA), 29 of its member companies invested an estimated $51.2 billion in R&D of new innovative treatments and cures. The figure is part of $600 billion the industry has invested in R&D since 2000, and represents the majority of all biopharmaceutical R&D spending — both public and private — in the United States.

The new R&D numbers, the result of a recent survey of PhRMA member companies, are highlighted in the newly released PhRMA 2015 Biopharmaceutical Research Industry Profile. Analysis of IP-intensive industries conducted by ndp│analytics shows that biopharmaceutical companies on average invest as much as six times more in R&D, relative to their sales, than the average US manufacturing firm. In 2014, PhRMA member companies invested nearly 24 percent of domestic sales into R&D.

“What the Industry Profile tells us — unequivocally — is that the commitment of America’s biopharmaceutical companies to solving the world’s most vexing medical challenges has never been more resolute,” said John J. Castellani, president and CEO, PhRMA, noting that the industry brought a record 51 new medicines to patients in 2014. More than 7,000 medicines are in development globally. 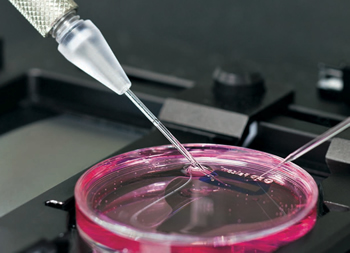 Biotech R&D continues to make headway, with biologics accounting for 10 of the 51 new medicines approved for patients in 2014 by US regulators.

"The road to bringing a new FDA-approved medicine to market is a long and formidable one," said PhRMA. "Only 12 percent of drug candidates that enter clinical testing are eventually approved for use by patients. On average, it takes at least 10 years and more than $2.6 billion to bring a new medicine from the research pipeline to patients."

The industry supports nearly 3.4 million US jobs, and the overall impact of the sector on the domestic economy is $789 billion annually.

Prior to founding ndp | analytics in 2000, Dr. Pham was Vice President at Scudder Kemper Investments in Boston, where he was responsible for research, asset allocations, and currency hedging for global and international bond funds. Before that he was Chief Economist of the Asia Region for Standard & Poor’s DRI; an economist at the World Bank; and a consultant to both the Department of Commerce and the Federal Trade Commission.

Based on official data from the National Science Foundation, the US Census Bureau, the US Bureau of Economic Analysis, and the International Trade Commission, the ndp report found that IP-intensive industries accounted for 83 percent of annual R&D spending across all U.S. manufacturing industries between 2000 and 2010, and R&D investment grew by 53 percent compared to 34 percent for non-IP-intensive industries. IP-intensive industries highlighted in the report include pharmaceuticals, semiconductors, computer & electronics, aerospace, medical equipment, transportation equipment, and petroleum.

From a productivity standpoint, IP-intensive industries produce more than triple the exports and double the output per employee. Additionally, workers earn about 50 percent higher wages than their non IP-intensive counterparts. Pharma employees earn 60 percent higher wages than the average for the manufacturing sector. Employment numbers also remained unchanged from 2000-2010 while other industries experienced job losses.

“Public policies that maintain incentives for innovation and encourage economic growth are critical to the future of our country’s manufacturing base,” Pham said. 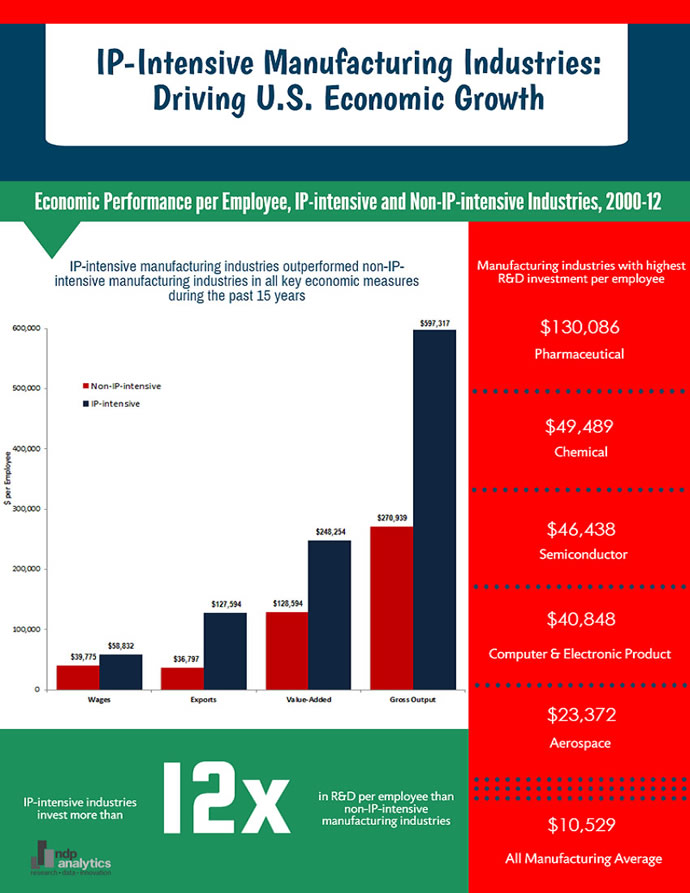