Delos and Lendlease in November announced a global alliance aiming to accelerate the integration of human health and wellness outcomes in the built environment. Pioneered by Delos, the WELL Building Standard® (WELL) is the world’s first building standard focused exclusively on human health and wellness. The collaboration will include identifying pioneering projects in key global markets where Lendlease operates, including Australia, Asia, the United Kingdom and the United States. Lendlease will also explore piloting the upcoming WELL Community Standard for its key urban regeneration projects.

“Supporting the next generation of buildings and places that get it right for people, as well as the environment, is very important,” said Geoff Dutaillis, group head of sustainability at Lendlease. “The built environment has a critical role to play in helping cities and governments transition towards a low carbon future; however, it’s the direct impact on human capital and productivity through increased focus on supporting human health and wellbeing which is the untapped potential.”

"In addition to the logistical advantages for transporting Agrinos' products worldwide," said D. Ry Wagner, CEO of Agrinos, of the location, "we also have the opportunity to seamlessly integrate this new facility with the new product development efforts underway at our Research and Development operations in Davis, Calif. and with our current production operations in Sonora, Mexico."

The company's global R&D team their California facility in February 2015. Other partnerships growing the company's business in India and Brazil, as well as in the US heartland, where in November the company's products were part of a new seed offering from Security Seed’s new Fertilizer Distribution Center at Henderson County Riverport in Henderson, Ky.

Another company with a California connection — genetic testing and diagnostics firm Natera, based in Sunnyvale — has announced its first location outside the Golden State, with a 400-job project in Austin, Texas. The early November news noted expected hiring of 40 to 50 people over two months. The company's careers Web page, however, on Dec. 28 included only a handful of job openings in Austin, while its home base of San Carlos, Calif., showed 65 openings.

Elsewhere in Texas, biopharmaceutical firm Ruga announced it would relocate its headquarters from San Francisco to Houston after receiving a $20-million grant from the Cancer Prevention and Research Institute of Texas (CPRIT), a nonprofit founded to attract innovative pharmaceutical companies to Texas in order to conduct research, develop new technologies and create jobs in the state.

The new zone will join the existing Greater Manchester Enterprise Zone at Airport City, which includes Medipark, increasing the region’s pull for businesses and investors. In the past three years, the 24 existing Enterprise Zones report that they have attracted more than 15,500 jobs, over 480 businesses and £2.1 billion of private sector investment.

"Our city is built on innovation, and this sector is key for the future of our economy," said Mike Blackburn, chair of the Greater Manchester LEP said. "It will attract top rate life science companies to the area and help make Corridor Manchester one of the top innovation districts in Europe."

Members of Americans for Safe Access (ASA), KOPAC and Dioscorides Global Holdings (DGH) were joined by the Minister of Health for the Czech Republic, Svatopluk Němeček, in Prague earlier this month to announce the establishment of the International Cannabis and Cannabinoid Institute (ICCI), intended to foster evidence-based exploration with a modern scientific approach to refine the therapeutic applicability of cannabis-based medicines in the Czech Republic. “The work of the ICCI will remove barriers to access for patients globally by bringing together the current knowledge base for cannabis research as it relates to biomedicine, life sciences and policy sciences to create a platform for sharing, exploration and education," said Steph Sherer, executive director of Americans for Safe Access.

Currently, two-thirds of the US population live in states with medical cannabis laws, and over 2 million Americans currently use medical cannabis as a treatment option, said an ASA release. Canada, Israel, Netherlands, Czech Republic, Croatia, Mexico, Uruguay, Romania, Germany, Jamaica, Australia, Colombia, and Switzerland all have national medical cannabis programs, while dozens of other countries are in the process of reviewing legislation. 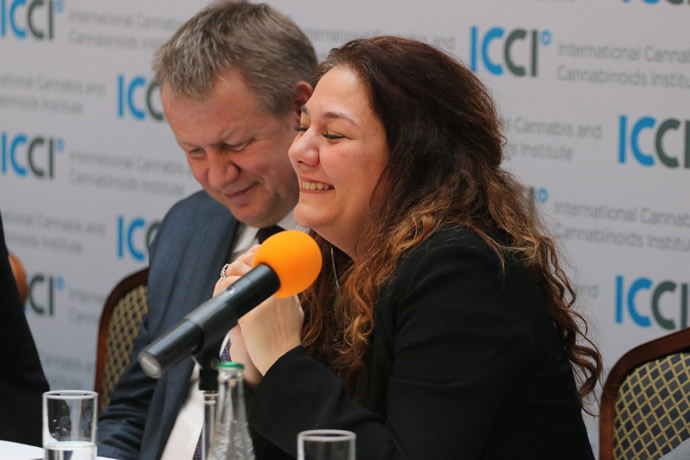 Steph  Sherer (foreground), executive director of Americans for Safe Access, speaks at  the opening of the International Cannabis and Cannabinoid Institute in Prague,  where she was joined by Minister of Health for the Czech Republic Svatopluk  Němeček (rear).
Photo  courtesy of ICCI

Eurofins Panlabs is expanding both its business and workforce in St. Charles, Mo., adding 10 new high-paying jobs to bring its local workforce there to about 55. The firm focuses on discovery services for pharmaceutical clients to help predict drugs’ clinical effects, with particular expertise in bio-analysis, including food and pharmaceutical products testing.

“We need high-quality scientists from an array of disciplines, and our ability to attract these workers here is possible because of high-caliber institutions in the region such as Washington University, St. Louis University, University of Missouri and other regional universities,” said Christina Shasserre, senior vice president of Eurofins Pharma Discovery and Bioanalytics Services U.S. “We are excited about the opportunity to expand within the region while building our talent pool of scientific and support staff.”

The St. Louis Regional Chamber helped the expansion happen, and the Missouri Department of Economic Development has offered "a strategic economic incentive package that the company can receive if it meets strict job creation criteria."

CBRE Group, Inc. announced Dec. 3 that it represented New York Stem Cell Foundation (NYSCF) in its 21-year, 41,500-sq.-ft. office and lab lease at 619 West 54th Street in New York City. “The importance of this transaction has no relationship to how real estate deals are usually measured,” said CBRE’s Stephen Siegel, chairman of global brokerage. “Square footage, aggregate rent — the usual criteria in leasing — isn’t the focus. Because what happens in this space will ultimately save lives — and helping to make that possible has been tremendously rewarding.”

The new hub, located in the Columbus Circle submarket, will offer NYSCF more space to further its research in finding cures for neurodegenerative and autoimmune diseases. The new space is housed in the Movielab Building, a 10-story, 326,863-sq.-ft. creative office building constructed in 1930 as a film editing and processing facility. NYSCF’s move-in is slated for September 2016, with plans for offices, a laboratory and large common areas, said CBRE.

Wondering where robots and life sciences intersect? The National Institutes of Health is too, which is why, as part of the National Robotics Initiative (NRI), the NIH announced this month that it will fund the development of three innovative co-robots — robots that work cooperatively with people — at the University of Alabama, the University of Arkansas Little Rock and MIT. Two of the robots will improve health and quality of life for individuals with disabilities, and the third will serve as a social companion for children that inspires curiosity and teaches the importance of hard work and determination. Funding for the NIH projects will total approximately $2.2 million over the next five years, subject to the availability of funds.

Quorum Health Resources, a subsidiary of Community Health Systems, in November signed a lease for the second of two buildings being developed by Southeast Venture in Mallory Park, in the Greater Nashville community of Brentwood. In September, Mallory Park was announced as the future HQ of Quorum Health Corp., the previously announced spin-off of Community Health Systems that will include 38 affiliated hospitals and Quorum Health Resources, a hospital management and consulting firm.

A connector will join the two 39,000-sq.-ft. buildings. The first building is slated for an early 2016 move-in date. The tenant build-out of the second building will begin in February 2016, with an expected move-in date during the second quarter of 2016. The connector joining both buildings is scheduled for a July 2016 completion. Upon completion, Quorum will occupy 100 percent of the 87,100-square-foot project.

“Quorum Health Resources’ relocation to Phase I of Mallory Park will facilitate a combined office complex in a convenient location for the new company,” said Southeast Venture Principal Cam Sorenson. “Quorum brings significant economic development to this area and we are happy we can accommodate their needs.” 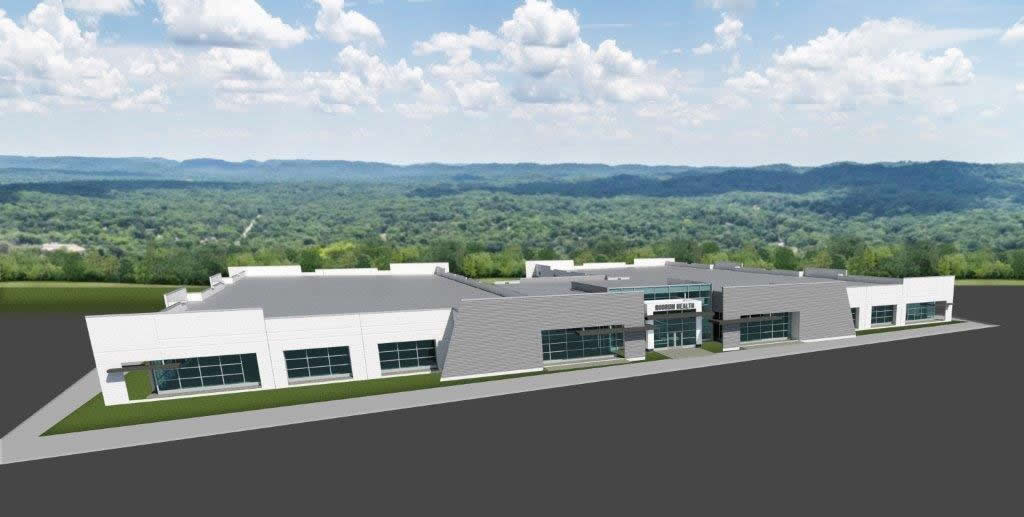 July 2016 will mark the completion of  Phase I of Mallory Park. Phase II will break ground Spring 2016 and will  include 78,000 sq. ft. of speculative office space. Like Phase I, it will  include two office buildings with a parking ratio of six spaces per 1,000 sq.  ft.