Out of Bounds on Purpose

Cross-disciplinary collaboration is in the DNA of America's crossroads. 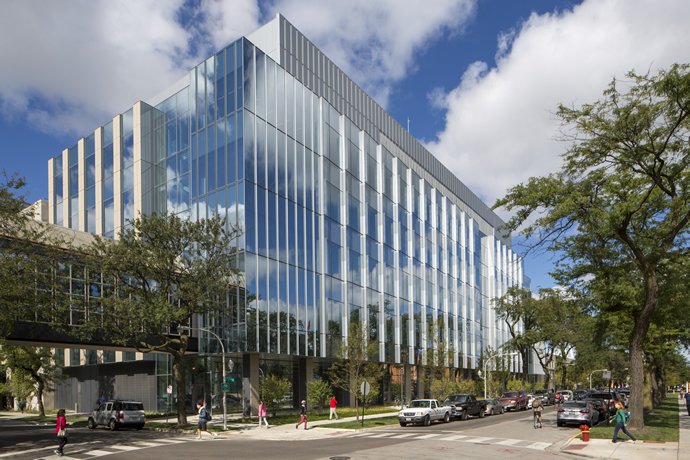 Each floor of the new William Eckhardt Research Center at the University of Chicago is considered a neighborhood, with disciplines ranging from astronomy to molecular engineering to fight cancer.
Photo courtesy of Tom Rossiter Photography
by Adam Bruns

The heavy-duty institutions of Greater Chicago appear to be plenty nimble when it comes to supporting life sciences innovation, from the purest of pure research to the latest startup venture. Sometimes all of that activity even takes place in the same building.

That's at least part of the vision for the University of Chicago’s William Eckhardt Research Center, formally dedicated in late October on the legendary campus on the city's South Side. The center, designed by HOK with the building enclosure by James Carpenter Design Associates (JCDA), brings together the university’s first molecular engineering program and its Nobel Prize-winning physical sciences research groups.

“We are excited that the William Eckhardt Research Center provides a sophisticated and beautiful home to support our distinctive programs in molecular engineering and astrophysics,” said University of Chicago Provost Eric Isaacs. “The Institute for Molecular Engineering has been successful in building a new model for molecular-level research with broad impact, and this facility will allow for even more ambitious work. Equally significant, this building befits the Department of Astronomy and Astrophysics’ long tradition of scientific eminence, and its continuing importance in that field of study.” 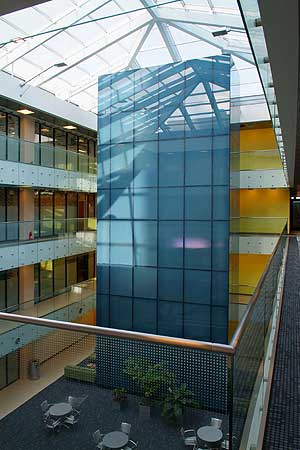 The center houses the university’s Department of Astronomy and Astrophysics, the Kavli Institute for Cosmological Physics, the Institute for Molecular Engineering and the Dean’s Office of Physical Sciences. Conducting research in the building are world-leading research teams working across multiple disciplines in the fields of chemical, electrical, mechanical and biological engineering as well as the traditional materials and physical sciences. "Five floors above grade provide flexibility and infrastructure for a variety of different lab types ranging from optics to chemistry," says an HOK release. "To isolate highly specialized labs including the Pritzker Nanofabrication Facility cleanroom and a high bay assembly lab from vibration and electromagnetic interference, two of the center’s seven floors are below grade."

The Institute for Molecular Engineering (IME) was established in 2011 by the University of Chicago in partnership with Argonne National Laboratory in order to explore the intersection of science and engineering.  Among its focus areas is bioengineering, including synthetic (non-biological) vaccines that have been shown to be effective in stimulating the immune system against certain types of cancers (lymphoma) and pathogenic bacteria strep. "As understanding of the immune system deepens," a recent university report explains, "immunobioengineering will become an increasingly powerful way to understand, manipulate, stimulate, and eventually control the immune system to address many conditions ranging from cancer and infections to allergies and auto-immune diseases." IME's work includes the "systems and computational bioengineering necessary to understand, as well as fluid mechanics and transport expertise to understand fluid and cellular movement through tissues to the lymph system."

Among the "neighborhoods" in the new Eckhardt Center is the Pritzker Nanofabrication Facility (PNF), a 10,000-sq.-ft., class 100/1000 cleanroom with an array of sophisticated tools including plasma etching systems, electron beam evaporators and atomic force microscopy. The lab “provides a unique research and development environment for the academic and industrial scientist interested in pursuing state-of-the-art micro- and nanoscale fabrication,” said Andrew Cleland, the John A. MacLean Sr. Professor for Molecular Engineering Innovation and Enterprise, who heads the facility. “We anticipate drawing researchers from the Chicago area, the Midwest, and nationally, both to use this facility and to establish collaborations with IME and UChicago researchers.”

UC's reach goes well beyond the new facility, of course. In November, Swedish business incubator research firm UBI Global ranked Chicago-area incubator 1871 as the best university-affiliated incubator in the US, and second in North America behind only the DMZ at Ryerson University in Ontario. The 1871 incubator — a collaboration among Northwestern University, University of Chicago, University of Illinois, Loyola University, Illinois Institute of Technology and DeVry University — is focused on digital companies, but with a healthy representation of life sciences firms, such as CareMerge, a communication and care coordination platform for senior living.

Institutes are Institutions Too

You don't have to be one of the nation's leading research universities to be a leader in bringing new concepts to market. According to David Baker, executive director of University Technology Park at Illinois Institute of Technology in Chicago, there sure is a lot of momentum among life sciences startups in his neighborhood. In a November blog post, he documented the recent acquisition by the MATTER health-tech incubator of Chicago Innovation Mentors (CIM), an organization that matches innovating faculty with teams of experienced entrepreneurs, executives and domain experts. At last tally, CIM's 200 mentors had served some 180 emerging biomedical ventures in the region.

Typifying the collaborative spirit of the area, CIM, located alongside many growing firms at Chicago's Merchandise Mart, was co-founded in 2010 by the University of Chicago, Northwestern University, University of Illinois, and iBIO Institute/PROPEL, and supported by a grant from the Chicago Biomedical Consortium. Argonne National Laboratory and Rehabilitation Institute of Chicago joined CIM in 2012, and Northern Illinois University joined in 2013.

For its part, MATTER has more than 115 companies in its stable, and recently opened a simulation studio in conjunction with the American Medical Association. Among its success stories is Diagnostics Photonics, which just won the top prize in a business competition sponsored by iBio Institute/PROPEL. In March, the PROPEL Center announced that "active PROPEL clients — all life sciences startups — secured more than $30 million in new funding in 2014, bringing the total raised to more than $140 million since PROPEL launched in June 2007." One of the major benefactors of PROPEL is the Searle Funds at The Chicago Community Trust. 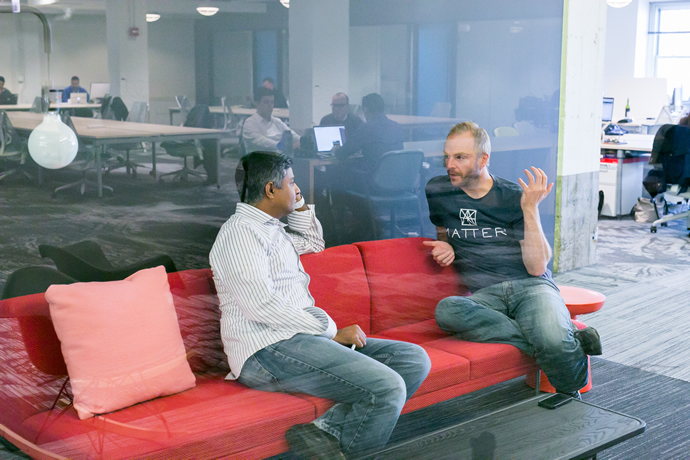 One of many successful Chicago incubators, MATTER counts more than 115 companies in its health-tech stable, and just acquired Chicago Innovation Mentors.
Photo by Greg Rothstein, Cloudspotter, courtesy of MATTER

“PROPEL plays a critical role in solidifying our region’s role as a major center of life sciences innovation and STEM education. This work is essential to the long-term strength of our regional economy and we are delighted to provide continued support because of the generosity of the Searle Funds at The Chicago Community Trust,” said Terry Mazany, President and CEO of The Chicago Community Trust. “PROPEL has been instrumental in our continued growth and success,” said Endotronix CEO Harry Rowland, whose company is based in Woodridge, Ill. “PROPEL’s educational programs and introductions to top quality advisors in Chicago, and worldwide, have been invaluable to our company.”

Meanwhile, Baker's own employer IIT is seeing a number of its own successes coming out of UTP, including Advanced Cooling Therapy (which Baker reports has now attracted $47 million in venture capital) and young startups MedTech BioScience and Great Lakes Neuroscience. "One of our newest companies, DeNovX, is tapping the UTP ecosystem to develop IP generated at Illinois Tech," Baker said in his November blog. "The company’s new technology will give pharmaceutical, nutraceutical and cosmeceutical firms better control over the production of complex protein crystals, helping to accelerate their R&D efforts."

The entrepreneurial vigor of the area is a contagion that multinational corporates have caught: According to the Conway Projects Database, which tracks major corporate facility investments, the Greater Chicago area has seen over a dozen medical device or biopharma investments since January 2014, including Horizon Pharma's 400-job HQ in Lake Forest, Baxalta's HQ in Bannockburn and a $25-million, 65-job expansion by Fresenius in Melrose Park.

Take It to the Lab

Chicago's predilection for collaboration appears to be infecting national efforts too. In October, a group of leading scientists representing a wide range of disciplines formed a unified initiative called the Unified Microbiome Initiative (UMI) to support basic research, technological development, and commercial applications "to better understand and harness the capabilities of Earth's vast systems of microorganisms."

"Microbiology is coming to a point where it's extraordinarily evident that bacteria, fungi, and viruses play a massive role in the development of health and disease in humans, in environmental settings and ecological systems," said Jack Gilbert, PhD, associate professor in the Department of Ecology & Evolution at the University of Chicago. Gilbert is group leader for microbial ecology at Argonne National Laboratory and one of the founding members of the UMI governing board. "We need to unify ourselves across the different disciplines to integrate our research objectives towards a common goal. We can do that in small cohorts at the moment, but the Unified Microbiome Initiative will create the infrastructure to come together under a single umbrella." 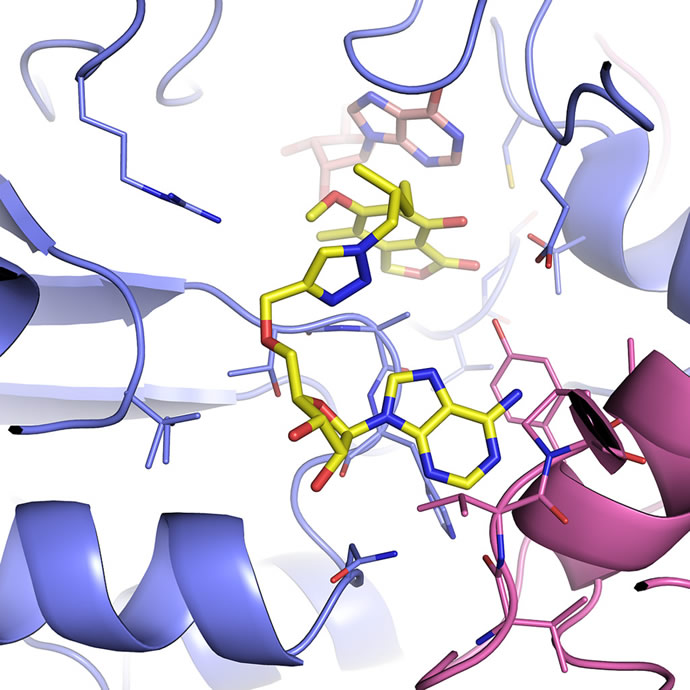