The odds of Louisville being a healthcare capital continue to grow more favorable. 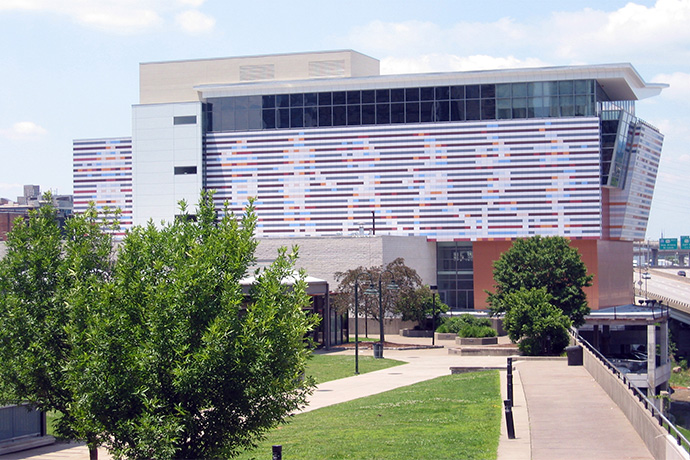 Drive on I-64 through downtown Louisville and your eye will be drawn to the distinctive Ali Center. But corporate investments are helping the city’s healthcare sector pack a big punch all its own.
Photo courtesy of www.kentuckytourism.com
by ADAM BRUNS

Healthcare employed nearly 430,000 people in Kentucky in 2013. Time was that figure was directly related to the state’s low public health rankings. But these days it also points to the status of places such as Louisville, which is home to more than 18,000 professionals producing over $48 billion in revenue in the lifelong wellness and aging care sectors alone.

The 2,700-sq.-ft. headquarters will be located in the East Point Business Park and will provide a variety of support functions for the companies in which Confluent Health has interests, ranging from finance and accounting to marketing and operations.

Confluent also will own a majority interest in local physical therapy clinics branded as ProRehab Louisville. Plans are underway for the first two clinics, which are set to open in the city’s St. Matthews and Fern Creek neighborhoods early in 2015. Both will provide physical therapy and workers’ compensation services to the Louisville area.

“We are very excited to both headquarter Confluent Health in Louisville and open ProRehab Louisville clinics in the area,” said Larry Benz, Confluent Health’s president. “We plan to expand rapidly in the local area in 2015, creating jobs for physical and occupational therapists and support staff. We have many innovative initiatives in the works that focus on increasing patient ease of access to physical therapy treatment and extreme costs savings for local employers that we look forward to bringing to the market.”

Hiring for a variety of positions is already underway for the headquarters as well as a number of local physical therapy clinics.

“We are excited to welcome Confluent Health and its company headquarters as a strong business and civic partner and as the newest addition to our growing healthcare sector,” said Mayor Fischer. “There are more companies engaged in the lifelong wellness and aging care industry based in Louisville than in any other city in the world, and that’s a solid testament to the strength and future potential of our local economy and our people.”

A Place to Learn

About a week after Confluent’s announcement, homegrown Kindred Healthcare announced its own HQ expansion, expected to create up to 500 new jobs, as well as a new operations center in Theatre Square.

“This is a tremendous day for Kentucky and for Louisville,” said Gov. Beshear on Dec. 11. “Kentucky is becoming the critical hub for the healthcare industry, and Kindred’s continuing success is a big reason why.”

“Kindred’s expansion and development of Kindred Square is a major investment in our downtown, creating a new headquarters building for our skyline and a major anchor for South 4th Street,” said Fischer.

Kindred plans to construct a six-story, 142,000-sq.-ft. building adjacent to the company’s corporate headquarters on South 4th Street. The new facility will house Kindred’s support center operations, national training center, Kindred University and an employee wellness clinic. Construction is expected to begin this summer and will take approximately 24 months. The new facility also will bring Kindred employees from across the U.S. to Louisville for seminars, educational programs and company meetings.

“The expansion of Kindred’s Support Center allows us to significantly increase the training and educational opportunities in Louisville for many of our employees,” said Benjamin A. Breier, Kindred’s president and COO. “The new space will enhance our ability to invest in the clinical expertise of our employees with the addition of Kindred University, and in their wellness with the creation of an onsite health clinic.”

Kindred is a healthcare services company that through its subsidiaries, operates transitional care hospitals, inpatient rehabilitation hospitals, nursing and rehabilitation centers, and provides contract rehabilitation services and home health and hospice care. Kindred currently has nearly 2,500 employees in Louisville. The company has annual revenues of $5 billion and approximately 62,600 employees in 47 states. Once it completes a merger with Atlanta-based Gentiva Health Services Inc. early this year, Kindred will become one of the largest healthcare companies in the nation, employing more than 100,000 people in those 47 states.

Gentiva stockholders approved the combination of the companies on Jan. 22. Kindred expects to close the transaction as soon as Feb. 2.

The Kentucky Economic Development Finance Authority preliminarily approved Kindred for tax incentives up to $11 million through the KBI program. KEDFA also approved the company for tax benefits up to $500,000 through the Kentucky Enterprise Initiative Act, which allows approved companies to recoup Kentucky sales and use tax on construction costs, building fixtures, equipment used in R&D and electronic processing equipment.

Finally, one week after Kindred’s big news, Beshear and Fischer got together one more time on Dec. 17 to announce that Edumedics LLC, a chronic disease management company that also got its start in Louisville, plans to expand its corporate headquarters, creating 17 new jobs.

With the help of $340,000 in KBI incentives, the company plans to build out new on-site clinics, enhance its data infrastructure and hire nurse practitioners, data analysts, sales directors and support staff. The expansion will require more office space for Edumedics’ headquarters, located in the Nucleus Innovation Park in downtown Louisville.

Two Louisville-based health care professionals started Edumedics when they recognized that employees with chronic conditions — such as diabetes and hypertension — can account for up to 75 percent of a company’s medical costs. Edumedics analyzes a company’s trends and provides individualized coaching and healthcare management to employees who have a chronic condition. Then, Edumedics dramatically improves medical treatment and compliance to standards of care which, in turn, lowers claims for service.

Edumedics provides services to more than 20 clients in six states, covering more than 60,000 plan members. The expansion will allow the company to expand its footprint to other parts of the country.

“In the past three years we have demonstrated the effectiveness of our programs and have saved meaningful healthcare dollars for our clients,” said Alice Shade, Edumedics’ CEO and co-founder. “We are now expanding to meet the needs of the many organizations throughout the country that are grappling with these same issues — controlling the cost of care while improving the health of their employees. We’ll help them do both.” 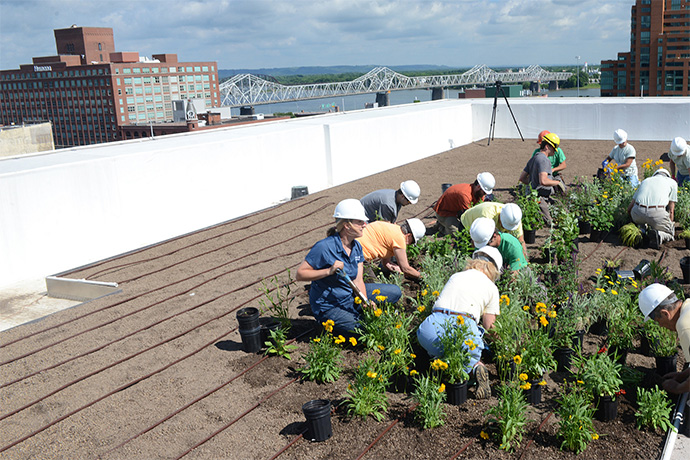 Volunteers from the Bernheim Arboretum and Research Forest planted 1,500 native plants and flowers on the roof of a Nucleus Innovation Park building in May 2013. The park’s own nurturing efforts are paying off, as it welcomed welcomed an expansion announcement from Edumedics last month.
Photo courtesy of University of Louisville