A global consultancy issues two new reports on global biopharma competitiveness, finding the US tops and its northern neighbor wanting. 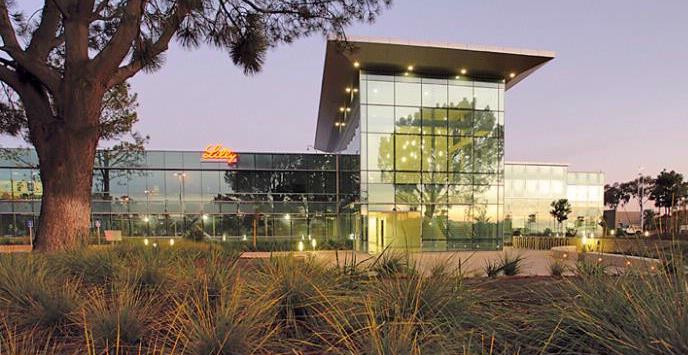 Eli Lilly likes the US environment so much it committed this week to expanding its Biotechnology Center-San Diego, shown here on the occasion of its grand opening in October 2009. The investment will more than double the footprint and could lead to as many as 130 new positions at Veralliance’s Campus Pointe complex, located near the University of California-San Diego and other prominent life sciences institutions.
Archive photo courtesy of Veralliance
by Adam Bruns

The first study, "Measuring the Global Biomedical Pulse: The Biopharmaceutical Investment & Competitiveness (BCI) Survey," was commissioned by US pharma industry lobbying group PhRMA. So it will come as no surprise that the U.S. and European economies continue to top the global charts in terms of attractiveness for biopharmaceutical investment.

"Notwithstanding low costs and considerable potential, emerging markets still come in at the bottom," says Pugatch of the 15 nations studied. "Canada is also found to be surprisingly low on the list compared to developed economies, mainly due to challenging intellectual property policies."

The BCI, a global survey-based index of economies’ biomedical competiveness, polls 350 biopharmaceutical executives of top-ranking multinational companies operating in 16 economies — who serve as ambassadors to their companies of the investment attractiveness of each market. By gauging their confidence in a given market and translating it into a quantitative score, the BCI enables a unique and highly relevant snapshot of economies’ biomedical competitiveness.

Top performers in the BCI — the US, UK, Switzerland and Ireland — all score above 80 percent of the total possible score and place at the top of the sample in most of the seven major categories of the survey, which range from the ability to leverage R&D and manufacturing capabilities to the regulatory, IP and market environment. "All four boast excellent and effective scientific research systems, regulatory and intellectual property (IP) frameworks that meet the highest international standards and relatively supportive market access environments. 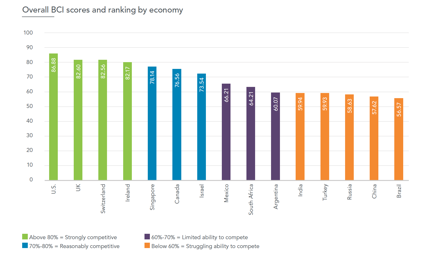 Markets falling into the bottom quarter of the sample — the BRIC economies plus Turkey — score less than 60 out of 100. "Though each market has its own specific challenges, common threads exist across all five," says Pugatch, "particularly in the areas of regulatory quality and efficiency, ability to secure a fair price and protection of biopharmaceutical IP rights."s

According to the firm, Canada has the least attractive environment among the developed economies, scoring 20 percent below the top developed market. "Local executives classified both Canada and Japan’s pricing and reimbursement systems as being particularly stringent, rating the market access environments in both economies more on par with emerging economies than developed ones," says the report. Rx&D, Canada's pharmaceutical industry association, did not respond to a request for a statement on the finding. The map below, however, illustrates the sector's influence and relatively robust health across each Canadian province: 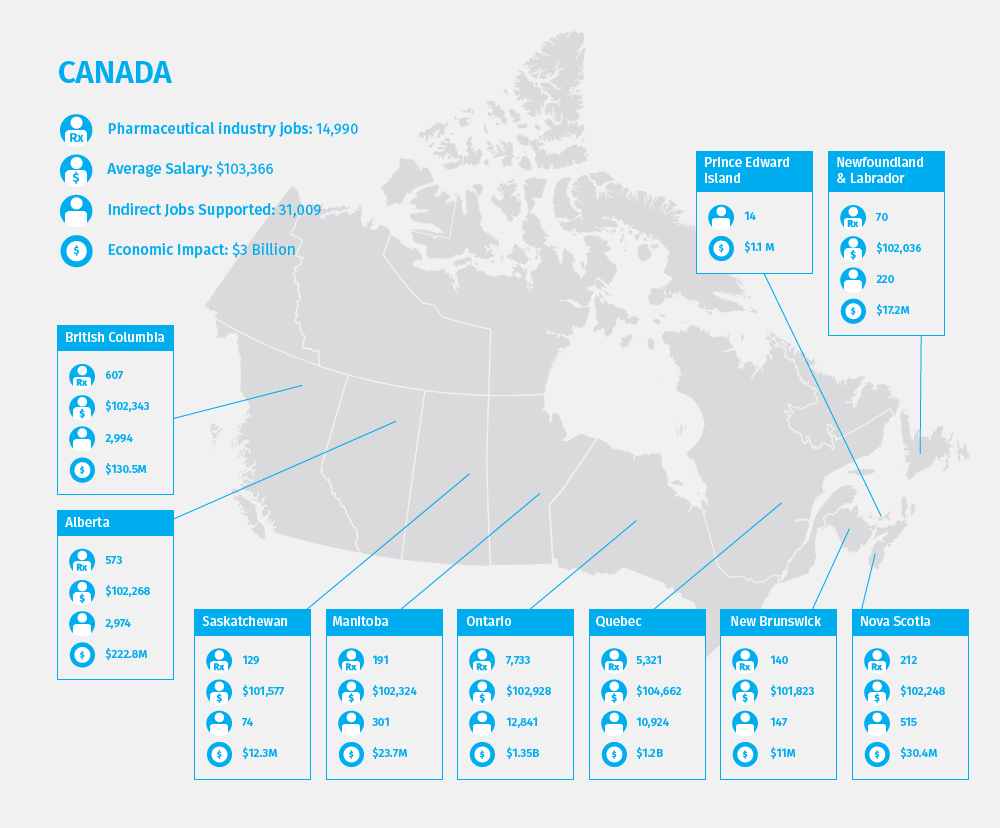 “Whether a high- or middle-income economy, the message is the same,” said Prof. Meir Pugatch, Managing Director at Pugatch Consilium. “In economies where policies affecting the biopharmaceutical environment present substantial challenges, local executives also rank these economies as having a lower ability to compete for investment from their companies. Nevertheless, in markets that have taken major steps to improve elements of the policy environment — such as Singapore and Israel, which have made significant strides in IP and regulatory standards in recent years — executives display much greater confidence, with these economies averaging at least 75 percent of the total possible BCI score.”

Did We Mention Regulation?

The second study, "Building the Bioeconomy 2015," available in its entirety on the Pugatch Consilium website, devotes 65 of its 102 pages to analysis of the biotech ecosystems in 13 countries: Brazil, China, India, Korea, Malaysia, Mexico, Russia, Singapore, South Africa, Switzerland, Turkey, the UK and the United States. Malaysia, Mexico, South Africa, Turkey and the UK are newly added to the group since last year's edition of the report. (See below for a full chart of the 15 markets' strengths and weaknesses.)

The report continues to hammer home the importance of the regulatory framework, and is not afraid to offer up examples:

"In particular, internationally competitive processing times for clinical trials applications and market authorization applications for new drugs and technologies is critical," says the report. "For example, two emerging markets with significant potential and high expectations in developing a biomedical and biopharmaceutical capacity, Brazil and Turkey, suffer from long regulatory delays. For example, in Brazil approval for clinical research needs to go through two separate government agencies and approval times can stretch to over one year compared to three months in the US and EU. Similarly, Turkey suffers from long delays in its market authorization process. Although Turkish regulators have stated that a submitted application must be processed within 210 days, surveys of manufacturers suggest that waiting times can exceed three years.

"This can be contrasted with Mexico," the report continues, "where regulatory authorities have committed to and implemented reforms that cut the approval time for drugs already approved in the US, Canada, and EU from 360 days to 60 days."

Successes and Stumbles:
A Bioeconomy Ecosystem Snaptshot of 13 Nations