Two years after its initial vision, DMC is now taking shape in MN. 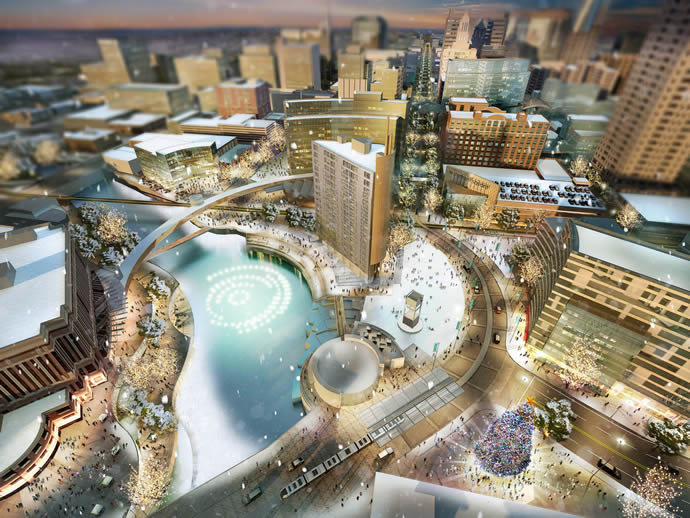 Located at the intersection of the Zumbro River and Second Street in Rochester, the Downtown Waterfront district is what Perkins Eastman calls "the heart of culture and history, providing a healthy living and working environment in an iconic waterfront setting."
Image courtesy of Perkins Eastman
by Adam Bruns

When a significant delegation representing Minnesota showed up at the BIO conference in Philadelphia earlier this month, a healthy number of them were from the Rochester area, including Mayo Clinic, the city, Rochester Area Economic Development, Inc., and DMC.

What's DMC? Well, it's not hip-hop legend Darryl McDaniels. Nor is it the Democratic Minnesotans Committee, or a reference to the state's Demilitarized Center.

It's Destination Medical Center, profiled exactly two years ago in this space after passage of legislation and funding to support its long-term development in Rochester. The largest economic development initiative in the state’s history, the DMC vision aims to secure Rochester’s status as a global destination by creating more than $5.6 billion in public and private investment to support the continued growth of the City and Mayo Clinic.

In 2012, Rochester voters reauthorized $20 million in sales taxes toward DMC development. In May 2013, the Minnesota Legislature passed a tax bill that included the finance tools necessary to fund the public infrastructure for DMC. The bill provided for $585 million in public investment, over the next 20 years, to help cultivate up to $6 billion of private investment over that same time period. 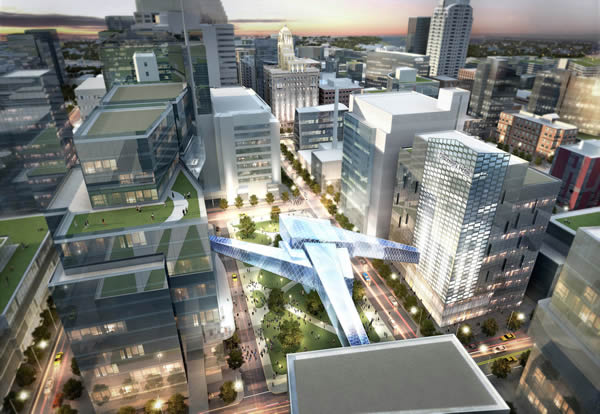 The plan received reinforced support during a special legislative session this month, as the city is allowed to tap into an already-existing quarter-cent sales tax in order to pay for continuing DMC administrative costs after the original $20 million runs out.

The design vision of New York–based firm Perkins Eastman this spring was formally adopted by the board of directors of the Destination Medical Center Corp.

"DMC will comprise six distinct districts spread across approximately 550 acres, all working together to support a diversity of mixed-use programming which will complement Mayo Clinic’s world-class healthcare facilities," said the architecture firm. "The vision for DMC began with creating iconic places throughout the destination city, designed to attract the best and the brightest, not only in the healthcare industry but in all sectors that contribute to a vibrant urban fabric."

The first project will occur at the intersection of 1st St. and 1st Ave., in what is known as the "Heart of the City."

“The Heart of the City is really the most critical and will have the biggest impact early on,” says Peter Cavaluzzi FAIA, Principal and Board Member of Perkins Eastman, and the project’s design lead. “The first phase of every large-scale project has to be large enough and bold enough to have an impact, but at the same time be small enough that it can be achieved.”

• The Heart of the City: The heart of Downtown and the DMC plan; "a place of connected urban experiences that builds off the convenient and walkable attributes of the City, with enhanced public areas and new mixed-use development"

• Discovery Square: The new address for the expansion of science, tech, and entrepreneurialism in Rochester; center of innovation and research; steps from the Gonda Building and Mayo Medical School

• Downtown Waterfront: Located at the intersection of the Zumbro River and Second Street; "the heart of culture and history, and providing a healthy living and working environment in an iconic waterfront setting"

• Central Station: The new nexus of transportation and arrival in the Downtown area; environment is envisioned to incorporate mixed-use development and a grand new intermodal transit station

• St. Marys Place: A new public space at the western threshold of Downtown, serving as a warm welcome for those arriving to the city via Second Street.

A week after BIO, those Minnesota delegates from Rochester had some top-shelf follow-up material, as CNBC named Minnesota No. 1 in its ninth annual list of America's Top States for Business, based on a methodology examining 60 competitiveness measures. While the state still lags at 35th in cost of doing business, it was No. 2 in education, No. 3 in quality of life, No. 5 in overall economy and No. 6 in technology and innovation.

“The first phase of every large-scale project has to be large enough and bold enough to have an impact, but at the same time be small enough that it can be achieved.”

— Peter Cavaluzzi FAIA, Principal and Board Member of Perkins Eastman

“Minnesota shows that there are multiple paths states can follow to be competitive,” said CNBC Special Correspondent Scott Cohn. “The state took a gamble by raising taxes in 2013, and at least so far it has paid off in improved state finances, and the fact that businesses were willing to stay put in order to take advantage of the state’s excellent workforce, top-notch education system, and superb quality of life.” 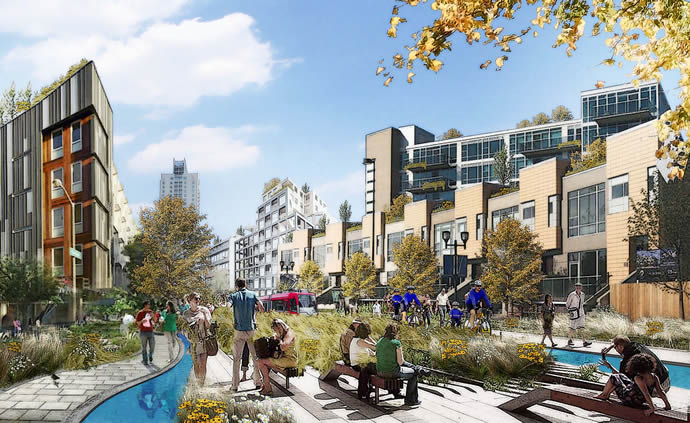 The DMC legislation passed in May 2013 provides for $585 million in public investment over the next 20 years to help cultivate up to $6 billion of private investment.
Image courtesy of Perkins Eastman