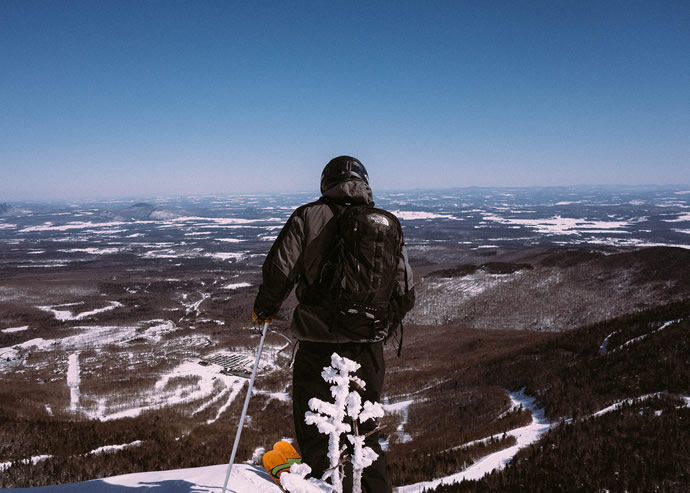 A skier looks out before dropping in from atop Jay Peak, abutting the Canadian border in Vermont's Northeast Kingdom.
Photo courtesy of Everett Freeman, Everett Freeman Visual Productions
by Adam Bruns

Jay Peak Resort, in the town of Newport hard by the Canadian border in Vermont's Northeast Kingdom, made headlines in April because of its powder base, having received more snow (357 inches) this winter than any other ski resort in the continental United States. That record was set just a couple months after the town's Lake Memphremagog hosted the US Winter Swimming Championships.

But things are warming up in the Northeast Kingdom these days. The area used to be known for its manufacturing base, including a life sciences sector that counts Cooper Vision, Baxter, GlaxoSmithKline and Millipore among its employers. Unemployment in the region has been high, but now it's coming down as the temperatures rise, thanks to projects from the likes of AnC Bio Vermont. Dr. Ike Lee, the president and CEO of the subsidiary of Seoul-based AnC Bio broke ground on May 14 for a $110-million, 400-job R&D and manufacturing complex in Newport, just 90 minutes from Montreal. 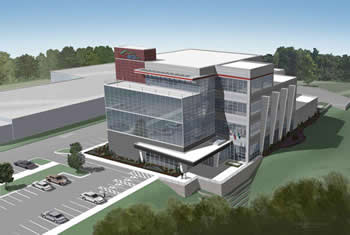 The EB-5 program allows foreign investors to receive a green card for themselves and family members in exchange for a minimum $500,000 investment accompanied by creation of at least 10 jobs. Jay Peak Resort owner and developer Bill Stenger and other state leaders helped organize the Vermont Regional Center charter for the EB-5 program in 1996.

Aided by EB-5 funds as part of Stenger's $500-million Northeast Kingdom Economic Development Initiative, the project will be constructed by PeakCM, in collaboration with NNE Pharmaplan, on the site next to the lake that previously was home to a the first overseas plant from German skiwear maker Bogner, built in 1972. Today it's called the Jay Peak Biomedical Research Park.

According to public hearings, construction documents and press reports, the 84,000-sq.-ft. AnC Bio Vermont facility will house 50 clean rooms (some for outsourcing to other users), medical device manufacturing such as portable heart-lung machines and dialysis machines; and adult stem cell therapy work that includes artificial organ manufacturing and stem cell research for organs and skin growth.

The company's Korean parent says it "develops and manufactures artificial organs for patient’s damaged organs with its own hybrid bio-digital technology," and established its original cell culturing facility in 2007. It has exclusive manufacturing and distribution rights of MyCell, a novel cell therapy for heart failure patients, and plans to establish a medical resort in Cheju Island for heart and/or kidney failure patients.

The company is not the only biotech firm expanding to Newport. Numia Medical Technology, a maker of infusion medical devices, recently purchased a building there as it moves from nearby Lyndonville. The Bogner site will see other non-bio investment too, as Germany's Menck Window Systems aims to create hundreds of jobs there with its own new $20-million operation.

The area has been aided by the approval in March 2013 of a Foreign Trade Zone status under the national program's alternative site framework, which allows an entire region to qualify as a zone. The zone was applied for by the Northeastern Vermont Development Association (NVDA), which serves the approximately 62,500 people and over 2,000 square miles of the Northeast Kingdom.

Stenger and Quiros have successfully used EB-5 to back investments creating some 800 jobs, including a waterpark and expanded lodging and amenities at their resort empire, including a $108-million revitalization with a new hotel and conference center at Q Burke Mountain Resort; and a downtown mixed-use project. Another resort along the eastern shore of Lake Memphremagog is aiming for a summer 2018 opening, but is currently stalled for lack of funding. 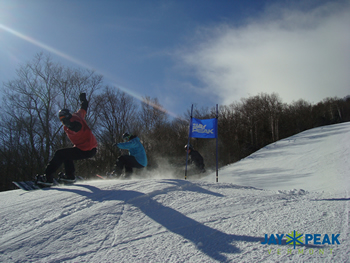 An archive photo shows snowboarders racing down Jay Peak, which this past winter received more snow than any ski resort in the continental United States.
Photo courtesy of Jay Peak Resorts

A non-EB-5 expansion at Newport Airport, backed by Stenger and Quiros with other funding, includes production and assembly operations from Flight Design Americas, a North American offshoot of a German company that makes the Flight Design C4 four-person light sport aircraft.

Last September it was announced that Newport State Airport will receive two FAA grants totaling $8.8 million to help with the airport’s expansion. “This expansion will pave the way for an exciting expansion of all aviation services in our region," said Stenger. "This grant will provide the capacity for the airport to welcome commercial aviation and substantial airfreight service. The jobs that will be fostered by this expansion will truly help all of our region."

In its announcement last May, Flight Design, which is also making planes at a new site in Xiamen, China, said plans include "a new 50,000-sq.-ft. assembly hall along with many new facilities. Newport, Vermont is within an economic development zone created by the State of Vermont to foster such new ventures and is well known for its proximity to the Jay Peak resort nearby. The Newport Airport is also the location for an onsite U.S. Customs and bonded warehouse facility, which will greatly aid in timely importation of container shipments from the nearby port of Montreal. C4 aircraft assembled in Newport will be delivered to customers in North and South America.”

Not bad for a little ski town. But not unexpected for an area with a champion like Stenger, who was recognized in 2011 by the Vermont Chamber of Commerce as the state's Citizen of the Year. In a September 2012 speech just after the reauthorization of EB-5, US Sen. Patrick Leahy paid tribute to both Stenger and the program, declaring, "At a time when so much American investment is incentivized off shore, isn’t it nice to see a government program that brings foreign investment onshore?"