Part of an organizational and civic transformation, the largest hospital move in Canadian history makes record time in Montreal. 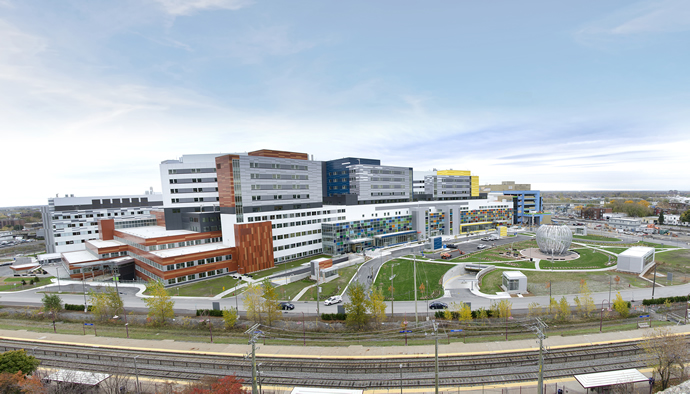 McGill University Health Centre’s new Glen Site — part of an overall reorganization funded by more than $2.3 billion from the Quebec provincial government — uses about two-thirds of its 43-acre property. MUHC intends to expand there more in the future.
Photos courtesy of MUHC
by Adam Bruns 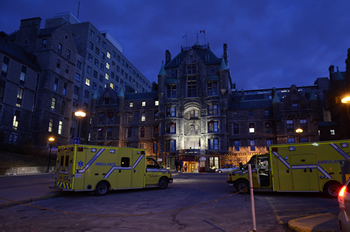 As dawn broke over Mount Royal on April 26, a fleet of 38 ambulances moved into position to transfer 154 patients from the 122-year-old Royal Victoria Hospital.

The secret to a complex move is just like the secret to good health: Follow the professionals' instructions, and stick to the plan.

When the move happens to be the largest hospital move ever carried out in your nation, following that regimen is essential — for organizational health and operations, and for individuals' health and medical operations.

On April 26 — a Sunday, chosen intentionally in order to encounter the least traffic possible — the McGill University Health Centre (MUHC) conducted the largest hospital move ever carried out in Canada, as 154 inpatients (139 adults and 15 babies) were safely transferred from the 122-year-old Royal Victoria Hospital atop Mount Royal in Montreal to MUHC's new Glen site.

The move lasted 5 hours and 20 minutes — two-and-a-half hours faster than expected. And it was because everybody stuck to a roadmap that took two years to put together.

"Follow the methodology," says Julie Paquet, MUHC's communications manager, as the team readies for the next phase of its multifaceted move May 24, when the Montreal Children’s Hospital will move to the Glen site. "That was our greatest lesson."

The public had been advised to go to the Glen site's emergency room, where the doors would open at 5 a.m. on moving day. It was a good thing they opened on schedule. By 6:55 a.m., a healthy baby boy named Arthur Perrault became the first child to be born at the new facility.

"That patient followed the instructions, and was the first one in even before the transfers," says Paquet. "It put everyone in a good mood and ready for the move ahead of us." 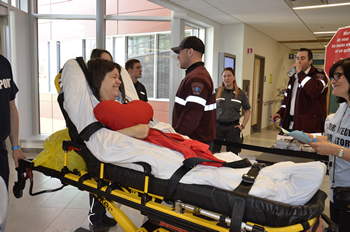 After meeting with care teams before dawn on April 26, each of 154 patients moved from the old place to the new every three minutes.

Not everyone was in a good mood at the prospect of the move, including unions, which put out messages of approaching chaos. "In reference to the union predicting chaos, since January 2015, 5,500 personnel of the MUHC have received training at the Glen site," MUHC responded. Messages written by staff and patients on long ribbons of mural paper on the marble hallway walls at the Royal Vic ranged from "Thanks for helping to save my life" and "Au revoir, mon Vic," to a heart drawn around the words "lies, theft, fraud."

But the sentiments for the most part expressed wistfulness for a historic past combined with hope for new beginnings. The moves to the Glen site are part of a $2.35-billion redevelopment project by MUHC at three sites — Montreal General, the Glen and Lachine Hospital. With 500 individual rooms, two emergency departments, and over 50 specialized services, MUHC calls the Glen site "one of the most innovative university health care centers in North America." The new hospital is designed and organized to let interdisciplinary teams work together to share their knowledge, discoveries and resources to advance medicine.

Health Care Relocations, a firm based in Peterborough, Ont., that has moved more than 300 hospitals, labs and healthcare facilities, was "a key ingredient in our recipe for success," says Paquet. "As long as we each followed the roles assigned to us and followed the methodology, it went very smoothly." The firm has helped projects including the move of two campuses to one at UCSF Medical Center Mission Bay in San Francisco, the move of various important research labs, and even the consolidation and transfer of 500 staff from nine sites in metro Honolulu to one at the National Oceanic and Atmospheric Administration's Pacific Region HQ at Ford Island, Pearl Harbor Navy Base in Hawaii.

The roadmap for MUHC is unfolding over six months:

Exhaustive planning and activation work was done over the course of many months leading up to the move to ensure that the new facilities would be functional in time for the patients’ arrival. In addition, on the RVH’s move day, some 2,500 clinicians covered patient care at both sites while 600 healthcare professionals and other volunteers coordinated the physical move. 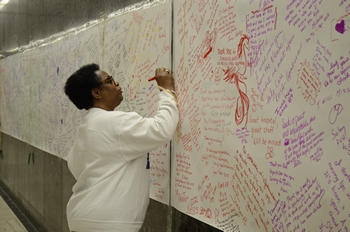 The marble hallways at the patrimonial Royal Victoria Hospital were filled with good wishes, gratitude and a few zingers as the facility shut down this spring.

“The move was a shining moment for the Quebec health network as a whole,” said Normand Rinfret, president and executive director of the MUHC. “Hospitals helped manage the overflow of patients, including performing a renal transplant at the CHUM [Centre hospitalier de l’Université de Montréal], and all partners showed that the spirit of collaboration is alive and well in Quebec.”

Paquet says the two years of planning involved regular meetings of all departments from food services to maintenance. The first permanent resident at the Glen? That was the Carrara white marble statue of Her Majesty, Queen Victoria, sculpted by Countess Feodora Gleichen and first presented in 1897, which made the move on Canada Day (July 3) last year.

Logistics details ranged from the phased move-in of $255 worth of mostly new equipment at the Glen site to housekeeping staff making sure the stretchers and gurneys were properly sanitized on moving day. Long-term patients were moved earlier. After meeting with their care teams, the April 26 patients were transferred approximately one every three minutes, traveling in 38 ambulances following construction-free, police-observed routes.

The path ahead for MUHC's beloved former buildings is not so clearly marked. But the approach is transparent.

"The Royal Victoria Hospital, the Montreal Chest Institute and The Montreal Children's Hospital are part of the city’s heritage and are strategically located in the downtown core," said the organization. "The reuse process involves provincial and federal legislation as well as municipal regulations and involves major stakeholders including the Québec government and the City of Montreal. We are very sensitive to the various stakeholders concerned and recognize the importance of engaging all the right individuals in these discussions. To date, our focus has been on obtaining approvals for the redevelopment project but in the coming months and years we will be looking closely at reuse. It is to our advantage to dispose of the buildings as close to our move date as possible in order to minimize carrying costs."

Paquet says the formal process for reuse of public health sector properties dictates that the Quebec Ministry of Health and Social Services is the first in line to have the chance at using the buildings for other health sector uses. Next come other ministries, followed by other buyers in the public sector and, if no public buyer can be found, bids from the private sector. As for older-generation equipment, Montreal General Hospital, which is staying on the mountain, has first pick, followed by other healthcare institutions and MUHC partners, then charities.

The Children's Hospital, Chest Institute and part of the Royal Vic were officially declared excess property as of 2015, but no public sector agency was willing or able to take on a new property, so they are being marketed through CBRE. "At the end of April, we issued the call for tenders for the Montreal Chest Institute, and May 7 for the Montreal Children's Hospital, so those propoerties are on the market," says Paquet. "We expect bids by the beginning of July," when a committee will review the proposals and choose who the buyer will be.

The Royal Vic, meanwhile, is in a different class, looking out on the city from its majestic perch.

"It's gorgeous, but has a ton of different pavilions, and is spread out on the mountain," says Paquet. McGill University has proposed a $1-billion mixed-use project for the site "that could really benefit the community," she says. "I think citizens here in Montreal did not want to see the buildings go to a private investor."

Supported by $4 million in provincial funds, the university is now conducting a feasibility study, and seeing if it can come up with the funds for the massive site. 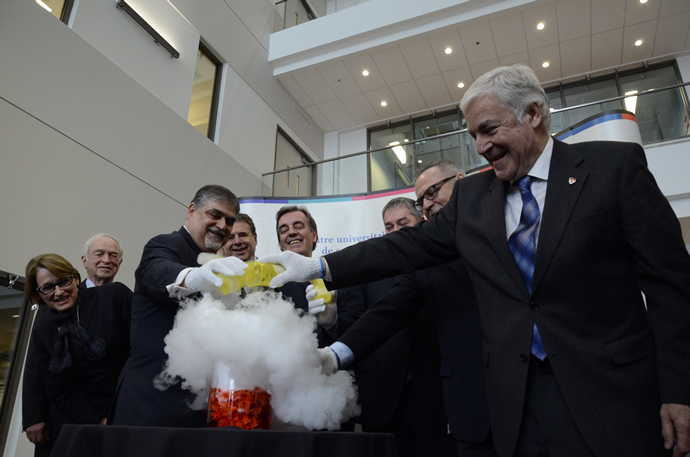 Why cut a ribbon when you can mix a potion? Normand Rinfret, director general and CEO of the McGill University Health Centre (MUHC), and Dr. Vassilios Papadopoulos, executive director and chief scientific officer of the Research Institute of the MUHC (RI-MUHC), inaugurated new research facilities at the Glen site with Yves Bolduc, Quebec Minister of Higher Education, Research and Science, and others in early February.