A new HQ from AtriCure is just the latest addition to a robust cluster in Mason, Ohio. 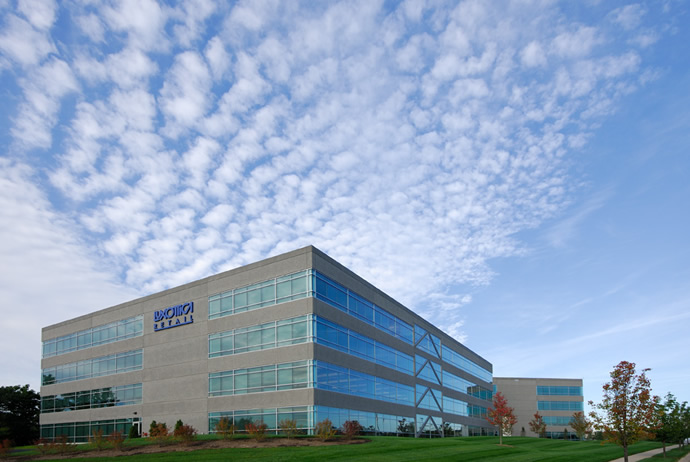 Luxottica Cincinnati Service Center in Mason is the worksite for approximately 2,000 associates working for EyeMed Vision Care, LensCrafters, Pearle Vision, TargetOptical, Sears Optical, Ilori and other members of the Luxottica family of companies.
Photo courtesy of Luxottica
by Adam Bruns

Since 1972, a replica of the Eiffel Tower installed at King's Island amusement park in Mason, Ohio, has signaled to drivers headed southwest on I-71 that they've almost arrived in Cincinnati.

Judged by the number of corporate life sciences investments in the past few years, Mason itself has arrived. And the companies don't need an inverted rollercoaster to be thrilled.

The newest investment was celebrated November 3, when medical device company AtriCure opened its new 94,000-sq.-ft. headquarters in Mason’s Oak Park District on Innovation Way, where the company is relocating 200 employees from its current HQ in nearby West Chester. The district, envisioned as a walkable town center with dining, retail and other amenities, already is home to Luxottica’s EyeMed, Stress Engineering’s medical device division, Seapine Software and the coming 60,000-sq.-ft. headquarters for precison medicine company Assurex Health, which has more than tripled its workforce over the past three years to nearly 300.

“Our new headquarters will give us the platform to grow our employee base, and to continue to make innovative progress in the fields of research, design and product manufacturing for the surgical treatment of atrial fibrillation,” said Michael Carrel, president and CEO of AtriCure, “And we couldn’t have chosen a better place to build. The ecosystem of companies here in the Oak Park district offers a dynamic environment, in addition to the City of Mason’s focus on a strong culture of wellness.”

“This site offers great access to our regional science partners and to top talent,” said Assurex Health COO Don Wright at his company's own HQ announcement last April. “We also want to ensure it is integrated into the community. Our discussions about the vision of the site and how it can bring to life the culture of wellness and creativity and innovation in our company and in Mason are exciting.”

Of the 30 corporate facility investment projects tracked by Site Selection's Conway Projects Database since January 2012, about one-third are in some way connected to the life sciences, including investments from such companies as Procter & Gamble, Festo Masters Pharmaceutical and Express Scripts. So it comes as no surprise that the city, along with Assurex, has hosted for three years in a row the BioOhio Regional Career Fair. 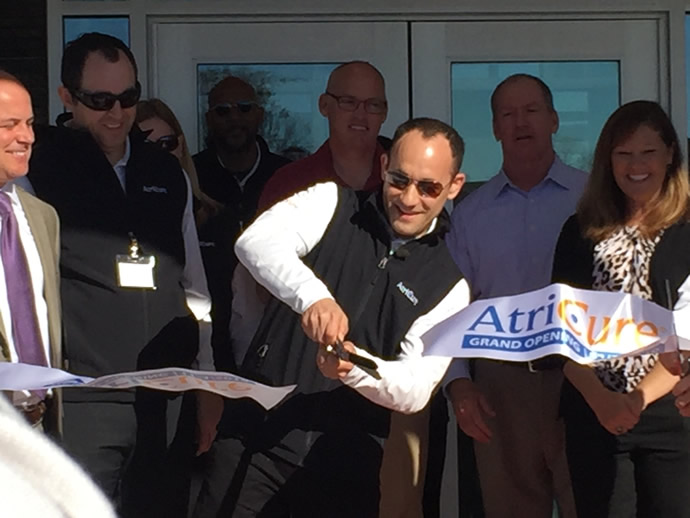 Michael Carrel, president and CEO of AtriCure, cuts the ribbon Nov. 3 at the company's new HQ in Mason.

Assurex knows a cluster when it sees one. Among its other partners is the world-renowned MaRS Discovery District in downtown Toronto.

“The biohealth talent is here,” said Wright last spring. “When we chose to expand and continue our growth in Mason, we had to believe we could attract the top biohealth talent in the country to accommodate our rapid growth. There’s no question we’ve been able to do that, and had great support from organizations like the City of Mason and BioOhio.”

Some hard infrastructure improvements are helping support such decisions too. The district is near the Western Row exit off I-71, which is welcoming an improved interchange being positioned as a new "business gateway" to Mason.

"It was always a northern exit and a southern entrance," he says of the exit. "The state has come up with a plan with the city and companies to fully complete the interchange."

He and his wife Kelly, both University of Cincinnati graduates, co-founded the company in 1995, working out of their house. Today the provider of application lifecycle management solutions employs 60, has offices on multiple continents, and serves the regulatory compliance and quality assurance needs of some of the biggest medical device companies in the world.

Company growth caused by the success of their TestTrack product caused the Riccetti's to look for new office space in 1999, landing in offices just off I-71 in Mason. 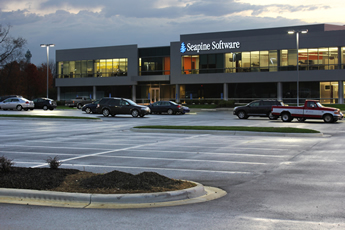 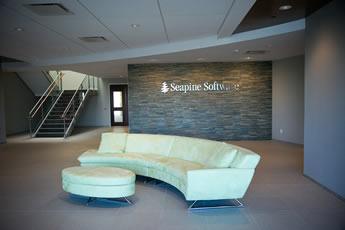 "Around 2003, we really started to outgrow that space," says Riccetti. As luck would have it, a tenant was moving out of the building right next door, so Seapine, with the help of incentives from the city, acquired two-thirds of a floor.

"Around 2011, our lease was starting to run out," says Riccetti, and an out-of-town landlord was upside down on the building and not negotiating in good faith, he says. "We looked at our options, a couple of which took us outside of Mason. But we ended up in a great location just down I-71, where we built 50,000 square feet with room for expansion, and moved in in 2012."

The Seapine site is straight across from King's Island, with a major tennis center, host of the annual ATP event just prior to the US Open, just to the north. Riccetti says Mason "has always been a good place to be" and has positive development plans for the future.

"We have one of the best school districts in the state. There's entertainment and a lot of great stuff to do," he says. "The city is very easy to work with, and they put a high priority on making the city look good — there are islands down the main boulevards, and it's well landscaped."

“The biohealth talent is here."
— Don Wright, COO, Assurex Health, on the workforce in Mason, Ohio

The city's large tax base helps spread the burden, and support strong fire and police services. Riccetti says the city's 1-percent earnings tax keeps it "pretty competitive with Blue Ash and other cities that have taxes."

Software development and engineering firms like his always hunger for more talent, says Riccetti, but as a national push for better STEM education and more such degrees unfolds, Mason is a good place to be.

"We have Ohio State north of us and the University of Cincinnati and Xavier here," he says. "There are a number of good colleges graduating a number of highly technical people."

Helping cultivate that critical mass is a city economic development team focused on high-tech, software and medical device firms — most of which pay healthy salaries. Riccetti says it's easy to operate globally (a third of Seapine's revenue comes from outside North America), with Mason's airport choices including Columbus and Dayton, in addition to Cincinnati/Northern Kentucky International Airport on the other side of downtown.

Asked if the life sciences companies in Mason have formed an association, Riccetti says, "We have not yet put anything like that together, but it would be a good idea." He says the company's customer base includes a handful of companies in Greater Cincinnati, but not as many as you might think. "Even though it's a larger city, we probably have twice as many companies in Austin using us." Part of the reason is that Seapine's products are targeted to software engineers, "and Cincinnati is lower, but certainly growing in that area," he says. "It has a great startup cluster, and venture capital has been finding its way to the city from within and from the coasts."

Seapine does so much business in the sector it even performs its own global survey, which this year received 900 responses. "In this year’s survey, we asked respondents what they thought was the biggest impediment to innovation in the medical device industry," said this year's report. "More than half identified external factors, such as government and international regulations, length of time for product approvals, the medical device tax, and reimbursement. The largest internal factors mentioned were a lack of proper funding, scarcity of resources, risk-adverse management, and a lack of integrated development tools."

From the looks of things in Mason, a lack of integrated development tools or an oversupply of burdensome regulations don't seem to be issues.

City economic developers might even be tempted to borrow from the original marketing slogan for King's Island when it opened its gates in 1972: "C'mon, Get Happy."